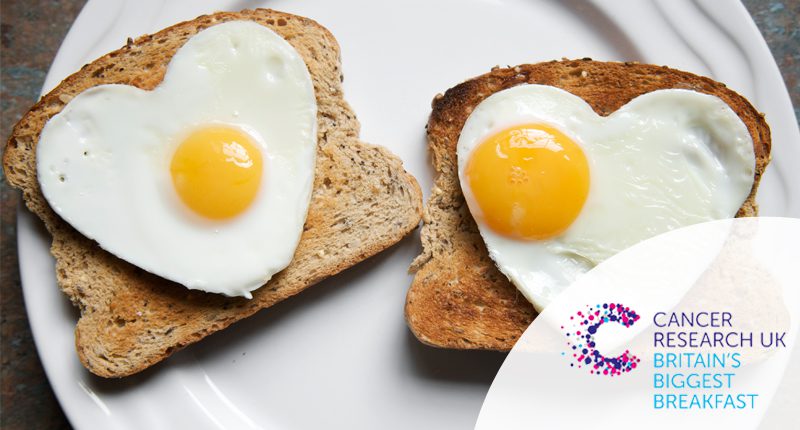 GET READY SCOTLAND IT’S TIME FOR

SCOTS are being urged to get a taste for fundraising by signing up to Britain’s Biggest Breakfast for Cancer Research UK. The charity is calling on everyone to organise a breakfast party at home, in the office or at school and invite their friends and family to make a donation to attend. Participants can unite with the rest of the UK and host their event on Friday March 11 or choose another day that month to help beat cancer sooner. Every hour, around three people in Scotland hear the news that they have cancer and the number of people being diagnosed with the disease has now reached around 30,200 cases every year.** That’s why Cancer Research UK is asking people across the country to sign up for their free fundraising pack now.

“We know Scots love a hearty brekkie, so this is the perfect opportunity to bring out the breakfast bowls and get involved. Money donated will help to fund vital research. From porridge pros to talented toast-makers, everyone’s welcome at the breakfast table. Every step we take towards beating cancer relies on every hour of research, every pound donated and every person who gets involved. That’s why we’re calling on people across Scotland to make their breakfast bigger and better than ever and help raise much-needed funds.

“Whether you like your eggs sunny side up or over easy, by serving up some tasty breakfast treats this March, you’ll be helping to bring forward the day when all cancers are cured.”

Cancer Research UK receives no Government funding for its research but the charity is fighting the disease on all fronts. Glasgow is home to the Cancer Research UK Beatson Institute, a thriving community of world class scientists and doctors while scientists at the Edinburgh Cancer Research UK Centre are involved in cutting edge research on new treatments designed to stop cancer spreading. Cancer Research UK spends around £31 million a year in Scotland. One in two people in the UK will be diagnosed with cancer at some stage in their lives, but the good news is more people are surviving the disease now than ever before. Survival rates have doubled since the early 1970s. But more funds and supporters are needed to bring forward the day when all cancers are cured.

Cancer Research UK’s Britain’s Biggest Breakfast pack contains everything supporters need to plan their perfect breakfast, including posters, decorations, recipe suggestions and fundraising ideas. Event hosts can simply collect donations upfront from friends and family or on the day of their breakfast.

To sign up and get a free fundraising pack, visit cruk.org/breakfast