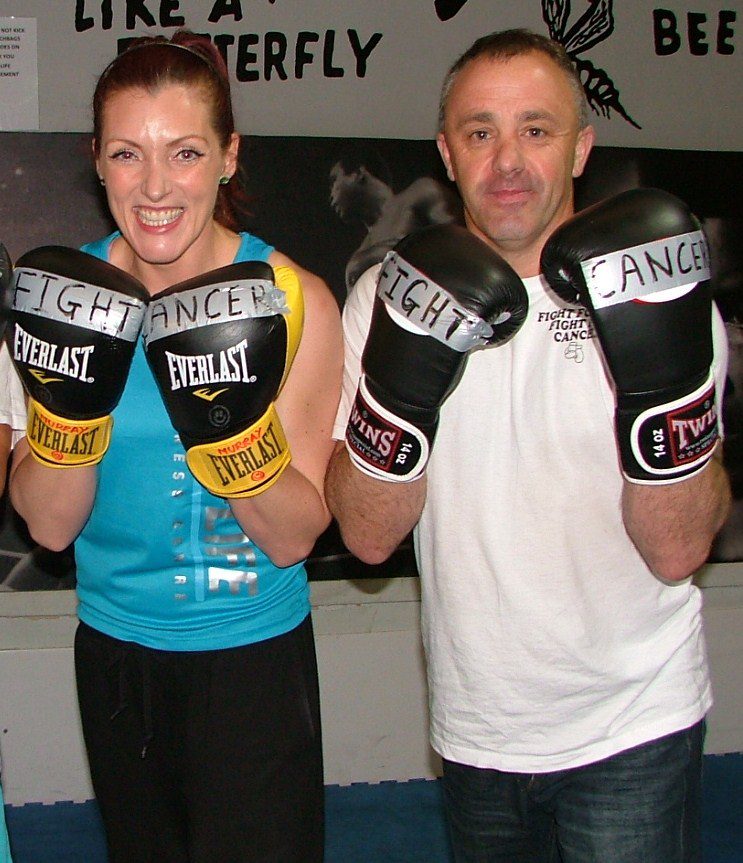 A caring Paisley dad has teamed up with Renfrewshire Sports Charity to stage a second fight night in Paisley to raise thousands of pounds to hit back at cancer. Buddie James Murphy, 49, is hoping to beat the whopping £13,000 he donated to the Beatson Cancer Unit after a similar event last year in the town. This time round the money will split between RSC, which is run by Pro-Life Fitness Centre to raise funds for ACCORD and St Vincent’s hospices  and  Mitchell’s Fun Rooms – a campaign set up to help create more for kids to do at the Schiehallion children’s cancer ward  at the new Queen Elizabeth Hospital in Glasgow.

Young Paisley schoolboy Mitchell Connell was diagnosed with lymphoblastic lymphoma, an aggressive form of blood cancer, in June last year and since then his family has worked tirelessly to raise thousands of pounds to fund the fun rooms which give kids a place to get together during long months of treatment.

Kick boxer James isn’t pulling any punches when he says: “We need Buddies to get behind this event just as they did the last time. It was an incredible night and fingers crossed we can do even better this year. The support I’ve been getting from fellow sportsmen has been incredible.

“I’ve been a member at Pro-Life for years and they and their members are backing me all the way in helping to organise and collect auction and raffle prizes as well as selling tickets. I’ve known Charlie and Kirsteen Connell a long time too and since Mitchell was diagnosed they have been unbelievable.

“As well as coping with the shock and devastation of Mitchell’s diagnosis they have taken it upon themselves to raise thousands for the ward so that kids Connell’s age have somewhere to meet, chat and play computer games or whatever they are interested in during their stay there.”

Well known 5th Dan Matt McLachlan, head trainer at the MMA Academy in Paisley is also providing fighters and will be judging on the night.

Members of Linwood and Paisley BCs will be also be represented on the night with the full card still to be named.

Spectators are in for a feast of entertainment with Muay Thai, Tae Kwon-Do, Kickboxing, Jiu-Jitsu and much more,

James wants to make it a family fun day too so children will get in free with loads of entertainment lined up to keep them amused.

Ringside seats for the event at the Lagoon Leisure Centre on Sunday, April 10 are £25, which includes food and table service. Balcony seats are £15 for adults with kids, who are accompanied by an adult getting in free,

James is also looking for donations for the auction and raffle which can be handed in to Pro-Life on 98 New Sneddon Street.

Gayle Brannigan, chief executive at Renfrewshire Sports Charity, said: “James and Charlie Connell have been members of Pro Life for a long time and we are happy to be backing this amazing fund raiser which will bring in much needed cash for our two Renfrewshire hospices and also for young Mitchell’s Fun Rooms campaign.

“The family have been inspiring in how they are dealing with Mitchell’s illness and James has been remarkable in raising so much money to help fight cancer. We will do anything we can to help boost the funds for these two great causes.

“Many of the boxers who are fighting on the night train here and are happy to be taking part and hitting back at cancer with Renfrewshire Sports Charity and Mitchells’ Fun Rooms. The people of Paisley are well known for their generosity and they are in for a treat if they come along and join us on the day.”

He ended: “Can I just thank Benny McSwegan of Paisley Kickboxing Club for backing this too and providing fighters as well as giving all of them the chance to gain ring experience in the gym for free. I am amazed at how everyone has rallied round to help. It’s awesome.”

The Connell family have already been able to raise a staggering amount though Mitchell’s appeal with A Just Giving crowdfunding page in honour of the schoolboy bringing in more than £8,000 in just 30 days and thousands more being collected through various events.

Glasgow News? Daily Updates part of our network
How to keep your documents safe online: The beginner’s guide to the cloud