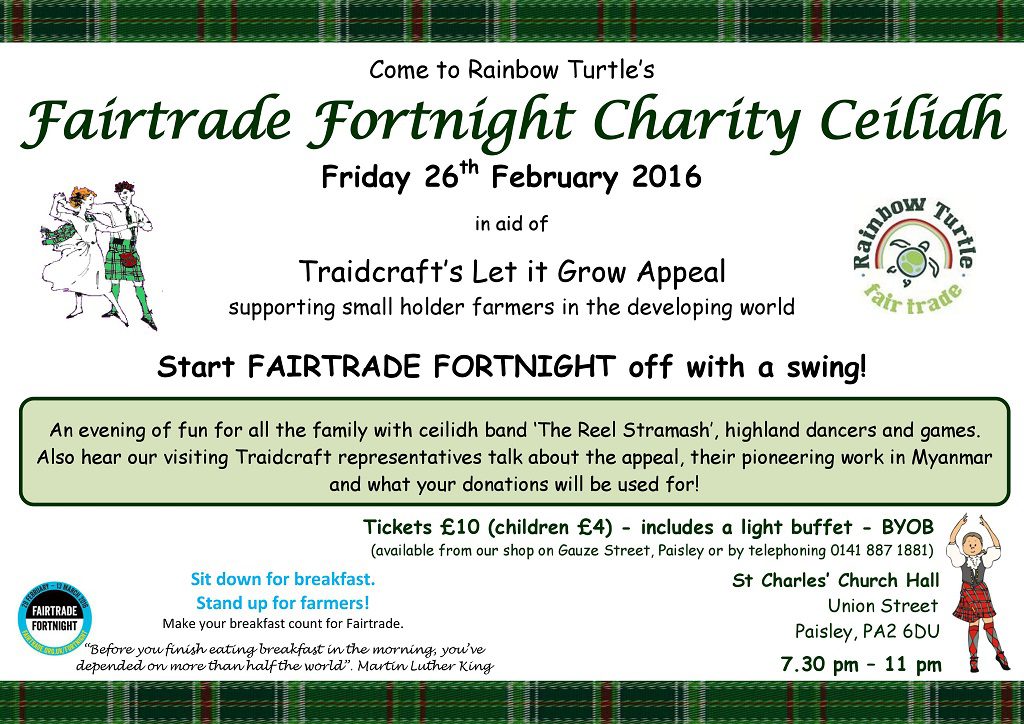 Fairtrade campaigners in Renfrewshire are challenging you to ‘Stand up for farmers, sit down for breakfast’ this Fairtrade Fortnight which runs from 29th February – 13th March. The campaign aims to highlight the severe lack of food security for farmers around the world.  Smallholder farmers grow around 70% of the world’s food but make up half of the world’s hungriest people. Following the success of the visit to Renfrewshire last year of Ismael Diaz, a honey producer from Guatemala, Renfrewshire was looking forward to receiving two visitors from Myanmar (formerly Burma) to kick start activities in the region. Saw Peter and Saw Law are from the Moe Goke small farmers’ association in the southern Ayeyarwady region of the country.

TRAIDCRAFT have been pioneering new areas of Fair Trade since 1979 and the recent project in Myanmar is resulting in the first Fairtrade certified product to come out of the country. Before its authoritarian rule began in the 1960s, Myanmar was the largest exporter of rice in the world. Recent elections and a change in the way the country trades with the outside world are offering new hope to its people. The success of this project in the Ayerarwady region will act as a blueprint for farmers and producers in all parts of the country and show them, as well as us, that fair, ethical trading practices can truly transform livelihoods and futures.

Unfortunately they had their visa applications rejected, highlighting the difficulties small scale farmers with limited wealth and assets have when they wish to visit developed countries like the UK.

Amongst many activities including school and community group visits, a ceilidh had been organised to celebrate the end of their visit to Renfrewshire and introduce them to some Scottish traditions. Rather than cancel it, it will go ahead in solidarity with our partners in Myanmar and to raise funds for Traidcraft’s Let it Grow Appeal. Some representatives from Traidcraft will join us to give a presentation of the pioneering project and tell us what the money will be used for.

We ask you to stand up to dance with us to set Fairtrade Fortnight off with a swing at the ceilidh on Friday 26th February 2016 in the St Charles’ Church Hall, Union St, and Paisley. Tickets are £10 and available from Rainbow Turtle Shop, 7 Gauze Street, Paisley or contact us on 0141 887 1881 or info@rainbowturtle.org.uk.

For more details on the Let it Grow Appeal go to http://www.traidcraft.co.uk/let-it-grow

For more details on Rainbow Turtle go to www.rainbowturtle.org.uk