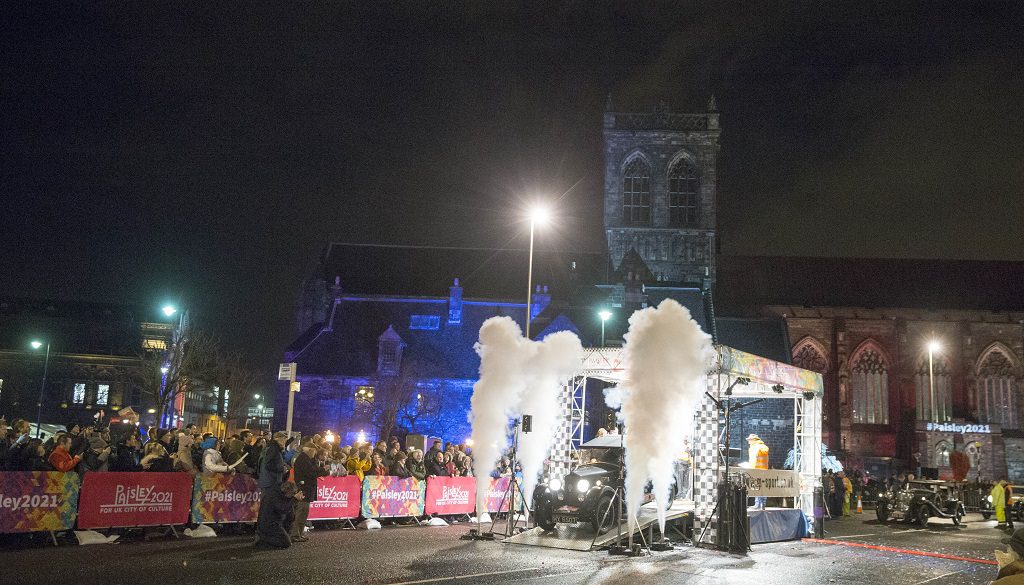 Thousands of people went car crazy in Paisley tonight as vintage vehicles again took over the town centre for the only UK start leg of the Monte Carlo Classic Rally. Paisley was hosting one of world motorsport’s most glamorous events for the third year in a row, as the town’s bid for UK City of Culture 2021 gathers pace.

More than 70 classic cars dating back as far as the 1920s gathered outside the iconic backdrop of Paisley Abbey before being flagged over the start ramp by Renfrewshire’s Provost Anne Hall.

Paisley is just one of five start cities for the rally from across Europe, with the others being Barcelona, Oslo, Reims and Bad Homburg, near Frankfurt.

Many cars were starting out on the 2,688km trek over the Alps to Monte Carlo as part of the official Rally Monte Carlo Historique, while others were heading off on shorter heritage runs to Balmaha and Dumfries.

Entrants included a 1950s London taxi piloted by a Belgian crew, and a Paisley for UK City of Culture 2021 branded Chrysler Sunbeam driven by a local driver.

This year saw a number of vehicles leave from John o’Groats, honouring the 90th anniversary of Scot Victor Bruce’s winning campaign, which started in the Caithness village back in 1926.

Visitors were able to get up close to the cars during the day, with Renfrewshire Council also laying on a programme including street entertainers and music from Clyde 1 DJs.

There was also kids entertainment in Paisley Town Hall including a giant Scalextric set and Sega rally simulator.

Renfrewshire Council Leader Mark Macmillan said: “Once again, we attracted huge numbers of visitors to Paisley for the UK start leg of the Monte.

“Being able to host such a popular, unique and truly international event like this is a great way to show off what Paisley has to offer ahead of the town’s bid for UK City of Culture 2021.

“Our thanks again go to our friends on the Rally Start Committee and we would like to wish bon voyage to them and all the drivers setting off for France.”

Douglas Anderson, co-ordinator of the UK Start Leg, added: “Since the rally returned to Scotland in 2011, more than 60,000 people have turned out to see these wonderful cars set off.

“2016 saw a new chapter written in the illustrious history of the Monte in Scotland, with a group of cars travelling down from John O’Groats, one of the original starting points for the rally.

“Once again, the people of Paisley gave the drivers a wonderful send-off and I would like to thank them and our colleagues at Renfrewshire Council for hosting another memorable start leg.”