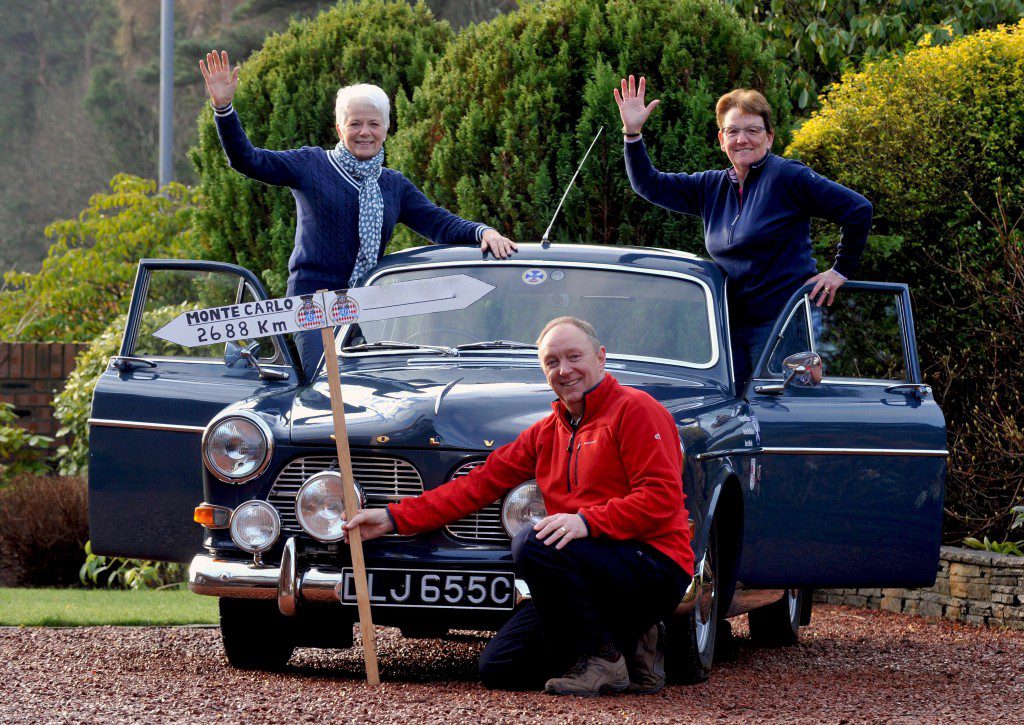 A 60 year old female rally novice hopes to reach Monte Carlo next week to toast her late husband whose cancer battle forced him to give up on his own quest last year.
Retired teacher Anne Meek (60) and family friends Craig and Helen McGibbon have entered the Monte Carlo Classic Rally in memory of Anne’s husband, Grant, who died in March 2015.

The Ayr dentist, who bravely fought the blood condition, Myeloma, was entered in to drive the Monte last January from Paisley with fellow car enthusiast, Craig.
Sadly, a worsening of his condition meant doctors could not allow him to attempt the 2688km trek across the Alps and his hope of competing in the famous event went unrealised.

Now Anne, who has never competed in a rally, Craig and Helen, also a beginner, are attempting to complete that piece of unfinished business on Grant’s behalf.
Retired Police Officer, Craig (60) from Troon has been feverishly preparing the 1965 Volvo 122S he and Grant bought for last year’s event, affectionately christened ‘Ingrid’ by the pair.
Anne and Helen (60) have been studying maps and two of Grant’s five brothers, Roderick and Andrew, are also competing in the support event in a rare Paris-built Darracq- in the Meek family since 1913. Anne admits the endurance event will stir many emotions but hopes the team are toasting Grant at the finish line in the French Riviera; something that would have made him proud.
The rally start, hosted by Renfrewshire Council as part of its UK City of Culture 2021 bid, will take place at Paisley Abbey next Wednesday evening (27th Jan) in front of thousands of spectators.

“Craig and Grant first talked about doing the Monte at a friend’s retirement night. The only thing they needed was a car. That was the Saturday night, by the Tuesday they had one,” she said.
“They were really looking forward to it. Obviously, Grant’s condition deteriorated quite quickly and he didn’t make it, with doctors advising against it. He and Craig did manage the Heritage Run (one of the rally support events) to Luss, and he really enjoyed that. “He said he didn’t get over the French Alps but managed the Arrochar Alps.”

Anne added: “ When Craig and Helen mentioned doing this year’s rally in memory of Grant, I thought it was a great idea.
“All we want to do now is get there and raise a glass of champagne in Monte Carlo to him.

“It is also brilliant his younger brothers are bringing the Darracq, which has always been in his family.”

Friend Craig is delighted to be doing the event from Paisley Abbey next Wednesday, knowing how much he and Grant had talked about it last time around.
The 3-strong Volvo crew from Ayr will be short on experience, he acknowledges, but full to the brim with Monte spirit.

“After Grant retired from dentistry, he got a great deal of pleasure from cars and we did some rallies in a Triumph Spitfire. We were kindred spirits. He was really looking forward to the Monte so it is good to be doing it this time. We won’t be one of the better supported crews, admittedly, but our objectives are different. We are all looking forward to getting into the spirit of it. Hopefully we can reach that finishing line.”

Paisley is one of the starting locations for this year’s rally, joining Bad Homburg, Barcelona, Oslo and Reims.

Glasgow News? Daily Updates part of our network
5 of the most expensive alcoholic drinks you can buy