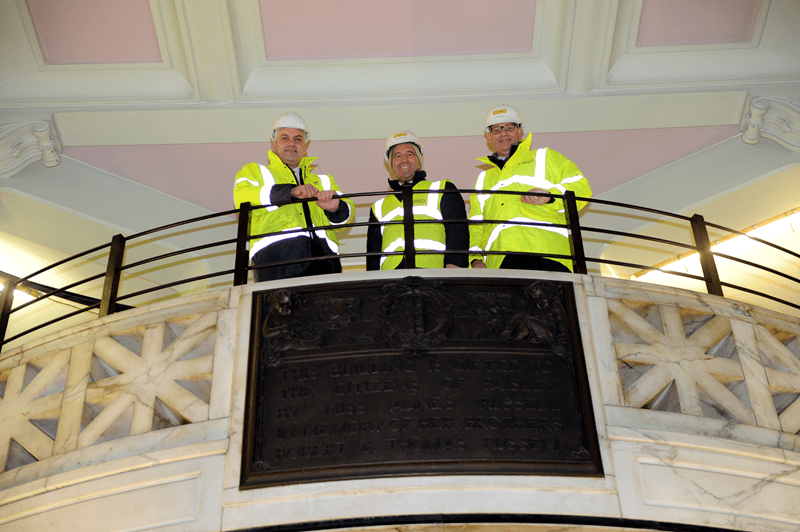 Work has now started to bring one of the jewels in Paisley’s architectural crown back into use – and bring almost 80 new office jobs into the town centre.

Builders are now on site inside the A-listed Russell Institute as they kick off the year-long construction phase of the £4.5m project to restore the former health centre. The building on the corner of New St and Causeyside St – notable for its distinctive statues – has been empty since 2011, but Renfrewshire Council this year took on ownership from the NHS, and secured funding to restore it to its former glory.

When it opens in late 2016, the building will house a skills and training hub, with the Scottish Government jobs agency Skills Development Scotland as the anchor tenant.

They will be joined in the building by staff from the council’s successful Invest in Renfrewshire employability scheme.

Over the next year, a number of specialist contractors will be on site to help restore unique features including the stonework, statues and railings.

Scaffolding will be erected round the building in the next few weeks but access will be maintained to neighbouring businesses, and disruption will be kept to a minimum. Renfrewshire Council Leader Mark Macmillan visited the building to meet bosses from main contractors CBC, who have worked on other historic buildings including Paisley Town Hall.

Councillor Macmillan said: “The Russell Institute is one of the finest examples of Paisley’s outstanding architectural legacy – within Scotland only Edinburgh has a greater concentration of listed buildings than we do.

“The project to restore the Russell Institute has been years in the making and we are delighted it is now entering the construction stage.

“This is just the latest bit of good news in the ongoing rebirth of Paisley town centre, with plans moving ahead for a £56.7m revamp of Paisley Museum, development on the Arnotts site nearing completion, and the Townscape Heritage Initiative which has transformed Causeyside Street almost finished too.

“Making the most of Paisley’s built heritage will be a crucial component of the town’s bid for UK City of Culture 2021, as that is all about using unique elements of our past to transform the town’s future.”

CBC Managing Director James McAlpine added: “Following the successful delivery of the Paisley Town Hall refurbishment project, we are absolutely delighted to be working with Renfrewshire Council to bring new life to another of Paisley’s architectural gems.”

The work is being funded by Renfrewshire Council, the Scottish Government’s Regeneration Capital Grant Fund and Historic Environment Scotland. The Paisley Development Trust kicked the project off by commissioning an initial feasibility study into its use.

The Russell Institute was opened in 1927 and was gifted to Paisley Burgh by Miss Agnes Russell, who wanted it to be used as a child welfare clinic as a memorial to her two brothers.