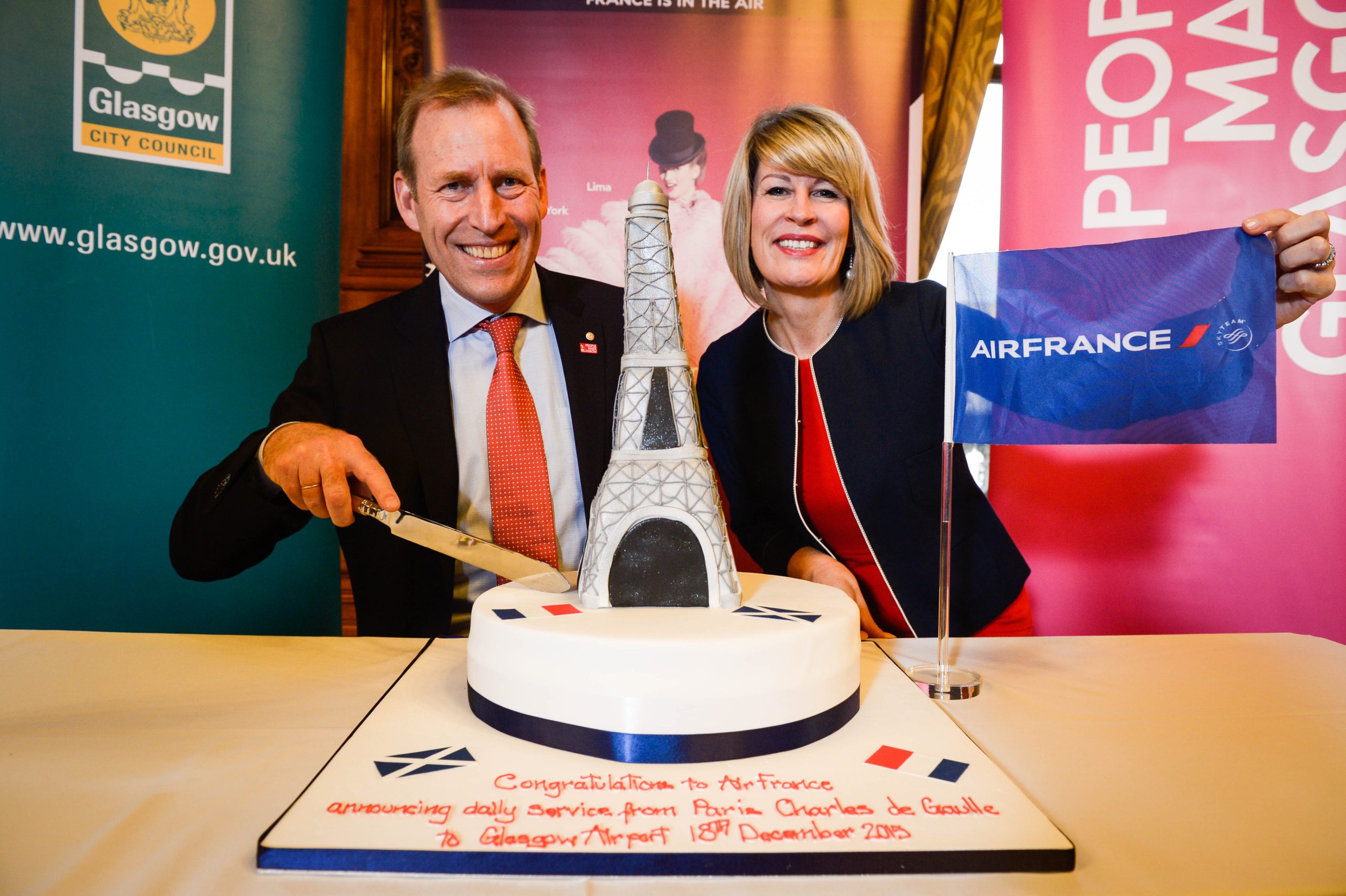 Air France is set to expand its short-haul network with daily flights to (and from) Glasgow, marking the airline’s 3rd Scottish destination and 9th UK destination. The route will form part of the airline’s new summer schedule for 2016.

Commencing on the 27th of March 2016, the daily flight will connect Glasgow to Air France’s Charles de Gaulle hub in Paris. The airline will offer a number of connections to its worldwide network of over 130 destinations from Scotland, including Shanghai, Tokyo and New York City. The daily flight will be operated by an Airbus A318, carrying up to 131 passengers.

Fares start from £88 return in economy including all taxes. Flights are open for sale from today on the airline’s website www.airfrance.co.uk  or Air France Reservations on 0207 660 0337 and via local travel agents.

Air France’s decision to introduce services from Glasgow Airport follows a strong business case put forward by the airport and the decision to strengthen its links in the UK market as well as position Air France as a key intercontinental airline for Scotland. The research showed significant support for business and leisure sectors for the commencement of the route as well as a growing demand for connectivity due to Glasgow’s diverse economy across a variety of sectors.

The daily flight from Glasgow to Paris offers passengers the choice of Economy or Business class, where in either cabin; they will be able to enjoy complimentary onboard catering and a wide selection of beverages.

With the addition of the Air France Glasgow to Paris-Charles de Gaulle route, the Air France KLM Group is strengthening its overall presence in Scotland and will offer more than 150 weekly flights. In total the Group will offer 7 routes from 4 Scottish airports (Glasgow, Edinburgh, Aberdeen and Inverness) to Paris or Amsterdam, where passengers will be able to connect to the extensive Air France KLM worldwide network.

Warner Rootliep, General Manager of Air France-KLM UK & Ireland said: “Demand from Scotland continues to grow and Air France has always invested in its Scottish network and local relationships from the region. We are pleased to further strengthen our presence in Scotland, with the introduction of the Glasgow-Paris route and we are confident the news will be well received. Air France KLM’s Scottish offering will ensure that local businesses are better connected to key markets around the world and we are proud to provide the largest city in Scotland with connectivity to and from key worldwide destinations”

Amanda McMillan, Managing Director of Glasgow Airport, said: “Air France is a major player in the world of aviation with an extensive route network through its hub at Paris Charles de Gaulle into important global markets such as South America, China, India and Africa. The airline’s decision to introduce a daily summer service from Glasgow Airport will play a crucial role in encouraging export led-growth, attracting further inward investment and supporting Scotland’s burgeoning tourism industry. Glasgow is the economic powerhouse of Scotland and the arrival of the French national flag carrier will further boost our connectivity with the world. This announcement rounds off what has been a remarkable year for Glasgow Airport in terms of passenger growth and route development. We have been working closely with our city and national partners to add further new routes for our passengers and we are looking forward to welcoming Air France on board in 2016.”

Minister for Transport and Islands, Derek Mackay said: “The announcement of this new service from Air France is excellent news for Glasgow and for Scotland and further enhances the country’s international connectivity.  This new link will complement existing services from Glasgow and give travellers access to more long haul destinations from the global hub that is Paris Charles de Gaulle Airport. That means Scottish businesses will have improved access to international markets and Scotland will be even more attractive as a destination for tourists. I congratulate both Glasgow Airport and Air France on this announcement and look forward to the service taking off next year.”

Councillor Frank McAveety, Leader of Glasgow City Council and Chair of Glasgow City Marketing Bureau, said: “This is a welcome announcement by Air France and a significant boost for Glasgow’s economy. Securing France’s national air carrier and the introduction of a direct daily summer service will further strengthen cultural and business links between Paris, Glasgow and the wider west of Scotland. There will undoubtedly be strong demand for this service, which has the potential to deliver considerable inbound leisure and business tourism. It will also vastly improve the city’s competitiveness by providing passengers with greater worldwide connectivity through one of Europe’s largest hub airports and Air France’s membership of the SkyTeam alliance route network. Glasgow is constantly striving to grow its air links and connect the city to the global marketplace. We’re looking forward to working with Air France, Glasgow Airport and VisitScotland on joint marketing communications activity to ensure the success of this new route.”

Mike Cantlay, Chairman of VisitScotland, said: “This is fantastic news for Glasgow and further strengthens the reputation of Scotland as an attractive destination for major airline investment, which is crucial to growing the visitor economy. France is one of our biggest European markets with French visitors attracted to Scotland’s romance and culture which sees them return year-round to explore our cities and landscape.

“Not only will this Air France service make it even easier for our French visitors to visit Glasgow – named as one of 2016’s ‘must visit’ destinations by National Geographic Traveler – but by connecting to a global hub like Paris Charles de Gaulle it will unlock the potential for growth in our long haul and emerging markets. It will further tap into the business tourism market giving increased access to one of Scotland’s premier events destinations.”

Glasgow Chamber of Commerce chief executive Stuart Patrick added: “Glasgow Airport has finished 2015 with a flourish of success after one of its best-ever periods, and it’s a compliment that we’ve come to expect no less from the Scottish and UK Airport of the Year. This is marvellous news for our business community as it gives daily access to another hub airport at Charles de Gaulle with ongoing links to major markets worldwide.”

http://www.relyongroup.co.uk  –  Relyon Hire and Transport has been storing cars for over 25 years in a private, secure compound with CCTV, security patrols and dogs. Our business is derived mainly from holiday-makers travelling through Dover Docks and, more recently, Eurotunnel parking (subject to an additional charge) – our site here is only minutes away from the docks and approximately 20 minutes from Eurotunnel.