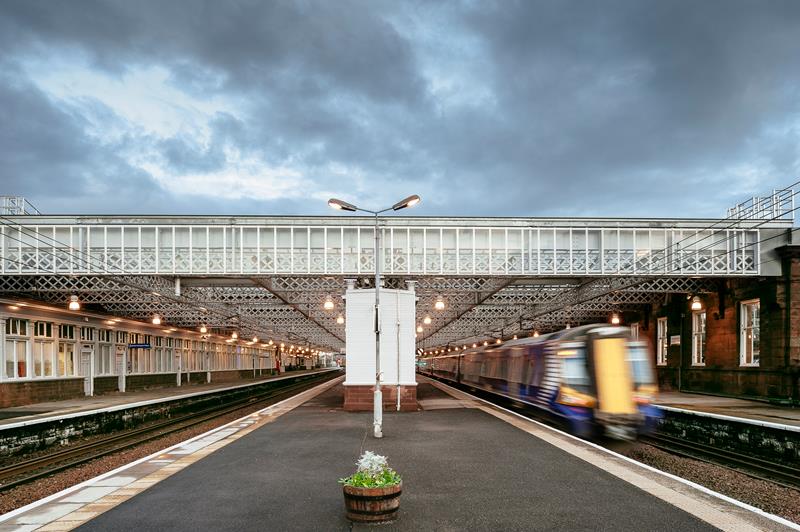 PGS opened in 1840 as a stop on the Glasgow, Paisley, Kilmarnock and Ayr Railway. It operated initially with two platforms until a further two were built to cope with the expansion of the town during the textiles boom.

The Grade B listed building has changed little in its 175 year history. The line was electrified in 1967 and locals may remember its roof being replaced in 2011-12. The building’s fortitude might be something to do with the four leaf clovers that decorate the trusses over the platforms.

Today, Paisley Gilmour Street is a key part of the transport infrastructure in the west of Scotland and its role will expand when the new rail connection between Glasgow Central and the airport comes into operation in 2024. Although two options, a tram-train or a light personal rapid transport system, are being considered, both would include a stop at PGS. The station can, therefore, be expected to get even busier and to feature in the journeys of those flying in and out of Glasgow Airport.

Councillor Mark Macmillan, Leader of Renfrewshire Council said, “Paisley Gilmour Street is a big part of local life and plays an important role in the town centre’s economy. Its passenger figures also show how pivotal Renfrewshire is to the economic growth of the west of Scotland.”

Despite Paisley Gilmour Street’s impressive history, current importance and future significance to the whole region, its operators, Scotrail and Abellio, have not designated it as one of Scotland’s strategic railways stations or marked it for development.

Councillor Macmillan continued, “Paisley Gilmour Street’s strategic importance should mean that investment in its future is a priority. The new airport rail connection and our town centre regeneration mean that ever-increasing numbers of people will be travelling to Paisley. For many of them, the station will form their first impression of the town – and of Scotland. We will be negotiating with Scotrail and Abellio to guarantee that Paisley Gilmour Street station will be enhanced to offer the type of facilities expected at a station of this scale and importance.”