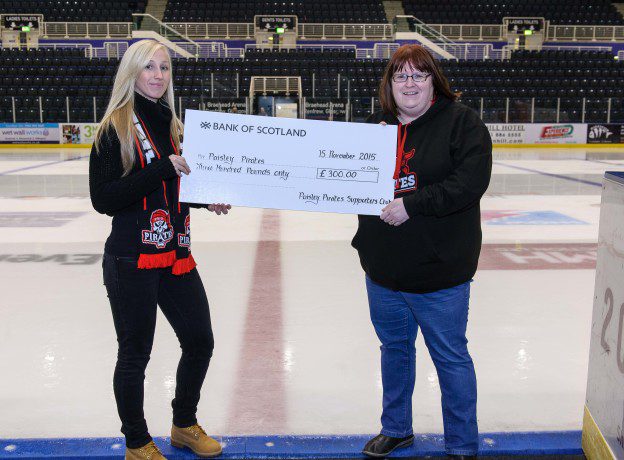 Paisley Pirates have been boosted by the formation of a Supporters Club which has already begun to provide vital lifeblood to the ice hockey team by way of a cash donation.

The Supporters Club was formed in the summer after Pirates’ secretary Jackie Turley had spoken with a few enthusiasts about setting up a fans’ association, aimed at taking some of the many duties associated with running one of Scotland’s most successful amateur ice hockey clubs away from the main management group. The Paisley Pirates Supporters Club (PPSC) was thus formed and has already set about the task of providing a focus for local ice hockey fans, while raising much needed cash for the team in the process.

“Yes,” said club secretary Jackie Turley, who herself recently won a Community Sports Volunteer Award, “running a club as large as the Pirates is a 24/7 operation, and we’d felt for a while that we would certainly welcome assistance from a like minded group who, while not actually helping with the actual day to day management of the ice hockey club, could certainly focus on specific areas such as fund raising, running social events, and generally taking some of the strain away from the relentless tasks involved in keeping the Pirates on the ice, and the Supporters Club assistance has been of enormous help to us.”

“They’ve already run one very successful Social Night, and I know another one is planned for early in the New Year, and they’ve already introduced a couple of new regular fundraising events such as Chuck A Duck which are going down very well with fans. We as a club can only say to fans, the more you take out memberships for the Supporters Club, the more you support the fundraising events and support the regular fundraisers, the more you are helping the Paisley Pirates, as the cash generated feeds its way back into the money needed to keep the organisation afloat.”

PPSC chairman Bill Elliot commented, “It’s great that fans have the opportunity to directly contribute to keeping the Pirates on the ice, by supporting the events the Supporters Club organises, and by actually joining the club they can have more of a direct say in what we do, as well as helping THEIR ice hockey club get bigger and stronger. We’ve set ourselves a target of £1,000 to donate to the Pirates over the course of the season and with their help, I’m in no doubt that we’ll do just that. We all want to see the Pirates be all that they can be, and by this type of support we can help maintain the club’s position as one of the foremost in Scottish National League ice hockey.” Pirates’ Treasurer Stacey Kerr receiving a cheque for £300 from the Secretary of the Supporters Club, Marie Cadenhead, Photo by Al Goold.

2566 Benefit from Small Business Bonus in Renfrewshire
Scroll to top