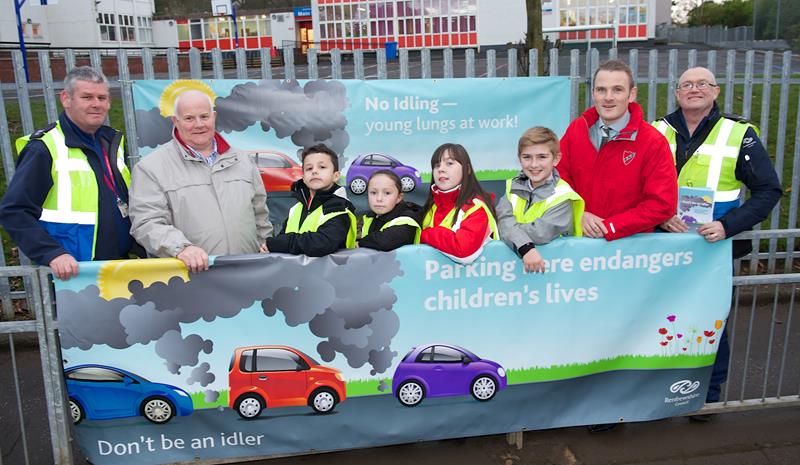 Renfrewshire’s primary schools are taking part in a campaign to improve children’s safety going to and from school.

The campaign aims to make drivers aware of the dangers of parking illegally near schools and the threat that idling engines pose to children’s health. Council officers, school staff and pupils at Auchenlodment Primary School in Johnstone organised a week-long blitz on inconsiderate drivers with a high-impact banners outside the school.

The campaign will target other Renfrewshire primary schools over the coming weeks.

“It is paramount that children in Renfrewshire are able to get to and from school without risk to their safety or health.

“Ideally, parents should avoid driving children to school where possible.

“Where this is not possible, we are asking parents who need to stop or park near a school to do so safely.

“Avoid parking on zig-zags and yellow lines and do not stop in the middle of the road.

“Also, if it is essential to wait outside a school, drivers should switch off their engines and minimise the dangerous CO2 emissions which can endanger children’s health.”

The campaign was kicked off during National Road Safety Week which takes place in November every year and which aims to raise awareness of death and injury on the roads, and the steps that can be taken to improve road safety.