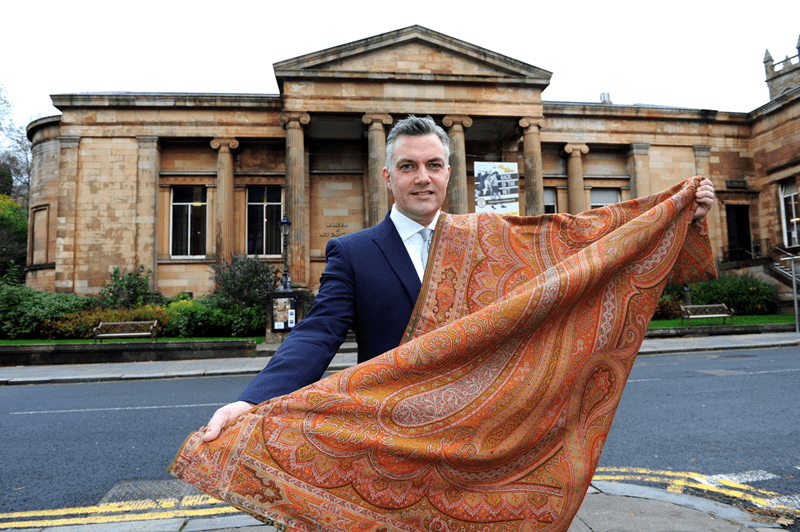 Paisley has put people at the heart of its bid for UK City of Culture 2021 as plans were unveiled today to place its museum on an international stage and support the local arts and cultural community through an innovative creative fund.

The Scottish textile town which changed the world, today unveiled plans for a £56.7m transformation of its flagship museum and also to create a £500,000 cultural pot for the local community. Paisley’s internationally-significant museum collections, and its one-time place at the heart of the global thread industry, have inspired the plans to turn the town’s museum into a national showcase of textile and design by 2021.

The museum is the flagship project of Renfrewshire’s long-term regeneration plans for the town. They include:

Visitor numbers to the museum could triple to hit 150,000 with almost 250 jobs created and up to £88m generated for the local economy as a result of the cultural and economic regeneration brought about by the museum transformation alone. They will support Renfrewshire Council’s wider economic, social and cultural regeneration strategy.

The plans were unveiled to coincide with a two-day event to officially launch Paisley’s UK City of Culture 2021 bid.

On Friday 13 November, bid ambassadors joined forces at Paisley’s 850-year old Abbey to issue a rallying call to Renfrewshire and beyond to support the bid.

The town will then host a massive public party on Saturday 14 November with an appeal to revellers to wear the world-famous Paisley Pattern for the Christmas lights switch-on event, topped off by a spectacular seven-minute Paisley-themed light show projected against the Abbey.

A social media campaign to back the bid using #Paisley2021 has started and a new website at www.paisley2021.co.uk goes live today to rally public support.

Councillor Mark Macmillan, Leader of Renfrewshire Council and Chair of the Paisley 2021 Partnership Board said: “We’re putting people right at the heart of Paisley’s bid for UK City of Culture and our new £500,000 creative fund will help them develop and participate in high-quality cultural events supporting our ambitions.

“From the local arts and cultural community, to professional artists and individuals, the fund will help every part of Renfrewshire realise its creative potential between now and 2021.

“Paisley was once at the heart of the global textile industry and by connecting that heritage to the future through a new transformed museum, we aim to bring the world to Paisley.

“The museum will become the cultural, social and economic heart of the town. It will be transformed for tourists and local families alike, and be the base for extensive community outreach supporting weaving, natural history, science and nature.

“By forging links with national museums and international institutions, local art groups and academic partners, we want to put Paisley at the heart of the world’s cultural map.”

The proposals are due to be considered by the council’s Economy and Jobs Policy Board next week.

He added: “The museum store will be a new anchor destination at the opposite end of the High Street from the museum to boost visitor footfall between the two.

“These plans have also brought the chance to re-imagine the library currently based in the museum complex. Library services are changing. Paisley Central Library serves more offline households than any other in the country from its public computers – so we’ll ask local people what they want from a modern facility in the heart of the town.

“Through a planned financial programme Renfrewshire Council has been able to proactively identify vital funds to deliver the regeneration of Paisley and has committed £22m to develop and promote Paisley as a destination town. The plans we announce today show where we intend to invest much of that resource.

“This is a major, long-term programme that will need wider support generated by a major fundraising effort.”

Bid ambassadors who joined Councillor Macmillan at Paisley Abbey on Friday 13 November have outlined why they believe Paisley should be UK City of Culture 2021.

David Wallace is Executive Director of PACE Youth Theatre – the largest of its kind in the UK with former pupils including Paolo Nutini and James McAvoy. He said: “Arts and culture play a huge role in achieving our social and economic goals through local regeneration, attracting tourists, developing talent, improving health and wellbeing and, just as importantly, changing the perception of a place and its community. Paisley’s bid for UK City of Culture 2021 is our vehicle for change and all Buddies are on board.”

Bob Davidson, Chief Executive of Renfrewshire Chamber of Commerce, said: “This is a once-in-a-lifetime opportunity to help Paisley become the great place it deserves to be – great for all businesses, their employees and their customers. Having been in Paisley for over 50 years, the Chamber fully supports the Paisley 2021 bid and encourages businesses and organisations of all sizes and sectors to do the same.”

Glasgow News? Daily Updates part of our network
UK housing market at its strongest since 2008: What this means for buyers