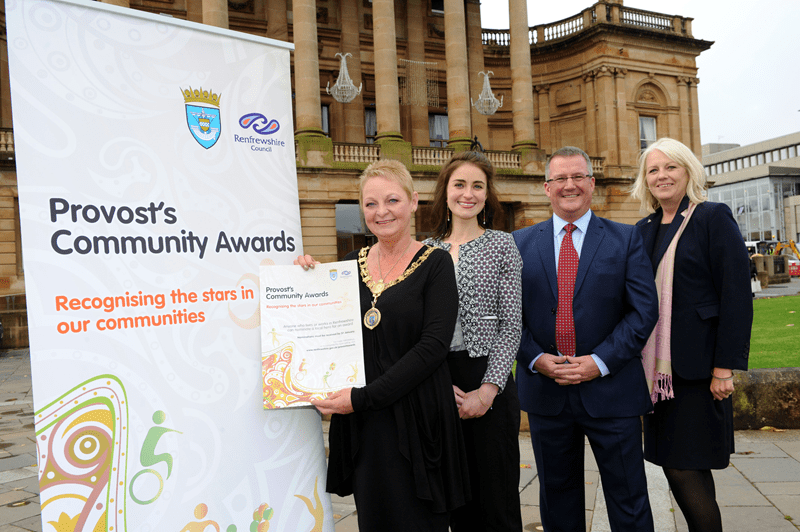 Nominations are now open providing a chance to recognise people who devote their time to helping others in the community but expect nothing in return. There are five categories under which people can be nominated; Community Group, Community Volunteer, Sporting Achievement, Carers’ Award and Employer of the Year.

Provost Hall said: “Every year we uncover new people who work tirelessly for the community for nothing more than the satisfaction that they are making a difference. These awards are an excellent opportunity to thank those whose efforts go under the radar.

“Nominations are increasing each year which is terrific and deciding on the winners is proving more and more difficult.

“I would encourage everyone to take the time to nominate as we must reward those individuals and groups who continually go that extra mile.” Nicola MacNaughton, Glasgow Airport Communications and Public Affairs Manager, said: “Communities are founded on the time and effort put in by the people who live within them. These volunteers deserve recognition for their efforts and we are proud to honour them through this award.”

Piazza Centre Manager, Maureen Hill said: “There are many community groups across Renfrewshire which undertake vital work with little acknowledgement of their efforts. This award takes the time to thank them for their work and the impact they make in our communities.”

Acre Industrial Services Ltd Managing Director, Jim Price said: “Sport is an important part of local communities across all age groups and is a vital part of a healthy lifestyle. We are delighted that we can continue to reward those who take their commitment to the next level and beyond.”

The Employer of the Year award is sponsored by Renfrewshire Council Leader Mark MacMIllan and encourages employees to nominate employers who have provided a positive working environment which provides training and development opportunities to its workforce.

Former Renfrewshire Provost Nancy Allison donates the Carers’ Award which rewards anyone who cares for a relative, friend or neighbour.

Nominations can be submitted online at www.renfrewshire.gov.uk/provostawards.

Printed forms are available at Council offices and facilities.

The closing date for nominations is 31 January 2016.

Winning candidates will be invited to the Provost’s Community Awards ceremony in March 2016.

Glasgow News? Daily Updates part of our network
BELGIAN SET TO DO THE MONTE FROM PAISLEY IN A LONDON TAXI