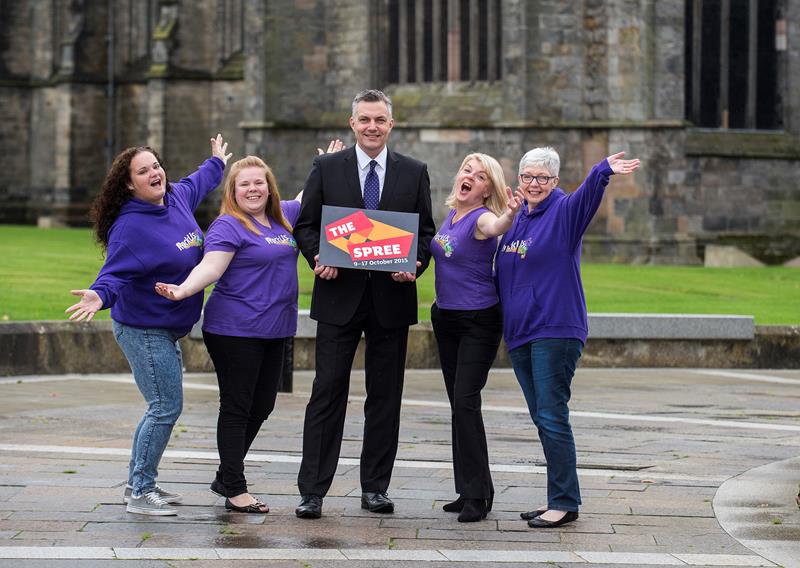 Paisley’s annual Spree festival of music, comedy and more is back for another year – with more than 60 shows taking place across the town over the next nine days.

The Spree runs from Friday 9 to Saturday 17 October at various venues in the town, with much of the action in the specially-erected Spiegeltent in County Square. The Renfrewshire Council-run festival is now in its fourth year and is taking place as part of the run-up to Paisley’s bid for UK City of Culture 2021, which is due to have its public launch next month.

The musical centerpiece is a one-off collaboration between Scottish rockers Idlewild and the Royal Scottish National Orchestra in Paisley Abbey on Friday 16 October.

That show is already sold out, as is James Grant and Chris Thomson in the Spiegeltent on Wednesday 15th.

But tickets are still available for a host of other musical acts – including Karen Matheson, Barbara Dickson, Aidan Moffat, Horse McDonald, James Yorkston and Karine Polwart, and 2015 Scottish Album of the Year winner Kathryn Joseph.

ModStuff – LNP Promotions’ celebration of all things Mod – takes place over two days this weekend in various venues with highlights including a show by top tribute band The Underground Jam on Saturday night.

Expect lots of comedy, with Des McLean playing Paisley Arts Centre on Saturday 10th, and two Best of Scottish Comedy nights in association with The Stand Comedy Club, on Friday 9th and 16th.

There will be plenty to keep kids occupied during the October break, with a full programme of events for children, including free drop-in workshop offering Minecraft and Lego robotics at various times during the days.

Renfrewshire Council Leader Mark Macmillan did his bit to help promote the festival when he met with some of members of the RockUs community choir, who will be performing in The Spiegeltent on Tuesday 13th.

He said: “The Spree is now a fixture in the area’s ever-expanding events calendar and as Paisley’s flagship cultural event, will only become more important as we move towards the town’s bid for UK City of Culture 2021.

“The festival is now in its fourth year and its growing popularity can be seen by the fact some of the shows sold out weeks ago – although if you haven’t got your tickets yet you still can for most of the shows.

“The next week or so is a great chance for residents and visitors alike to have a night out in the town centre and enjoy everything Paisley has to offer.”

The Spree 2015 is sponsored by local business Saporito and by Birra Moretti, with Saporito set to operate a bar-tent and a café-tent in County Square during the festival.

For more information on the festival and to buy tickets for any of the shows, see www.thespree.co.uk or visit the box office at 9b Gilmour Street.