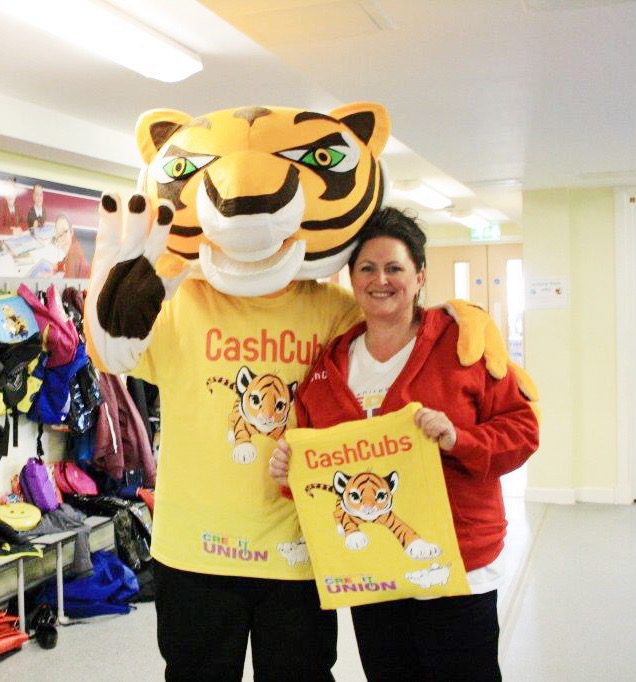 Renfrewshire-Wide Credit Union is re-launching their primary school saving clubs under the new name of ‘Cash Cubs’. Cash Cubs is a new initiative building on the successful school savings clubs launched by the credit union in Renfrewshire schools in 2009. Bringing the concept bang up to date with the addition of the fun and exciting Cash Cub mascot, primary school pupils are encouraged to get even more active with their school credit union or to join from scratch if they’re not already a member. The first official launch of Cash Cubs takes place in partnership with Kirklandneuk Primary School. Alison Dowling, who launched the original RWCU school credit union project and is now rolling out Cash Cubs across Renfrewshire said, “Kirklandneuk Primary School has been running a hugely successful school credit union for six years now. To celebrate their dedication we’re delighted to officially launch Cash Cubs alongside their ‘go the extra mile’ staff and pupils, particularly Deputy Head Angela Sloan who has championed the school credit union idea from the start. We’re also looking forward to launching in our other flagship schools, and bringing the fun and excitement of the Cash Cub to lots of our budding savers across Renfrewshire Schools. Cash Cubs will help children to save up money and learn lots of essential life skills along the way, while building up a savings habit that we hope will last a lifetime.” Alison added “The Renfrewshire-Wide Credit Union has benefitted massively from Renfrewshire Council’s Credit Union Development Fund. It has enabled us to bring Cash Cubs to our credit union to revitalise the essential financial education work we undertake in partnership with Renfrewshire primary schools. We have more exciting plans in the pipeline that the fund has helped bring to life, so we give a big thank you to Leader of the Council Mark MacMillan and the council team for getting behind us to help the people of Renfrewshire enjoy sounder, savvier finances”.

The Launch will take place on Monday 5th of October at 11am in Kirklandneuk primary school, for further information on the Renfrewshire Wide Credit Union please contact Alison Dowling, Project Coordinator on 0141 889 3111 or alison@rwcu.co.uk .