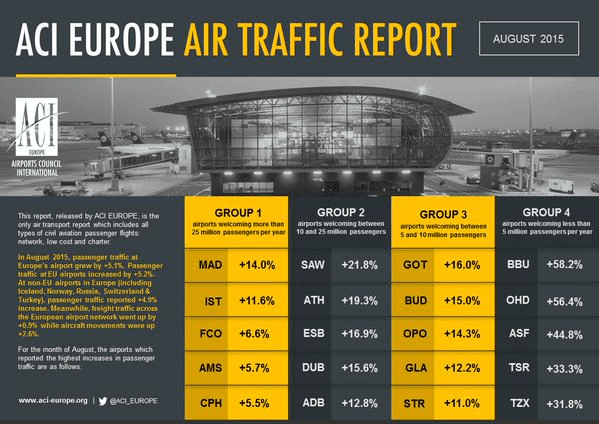 The report confirmed that Glasgow Airport was the fourth fastest growing airport in its category during the month, with annual passenger traffic increasing by 12.2%. Glasgow Airport reported its 30th consecutive month of growth in August after 878,515 passengers travelled through its doors.  The month capped what was a bumper summer season for Glasgow, and the airport’s busiest in seven years, with more than three million passengers travelling through during June, July and August. The airport has also recorded double digit percentage growth in its passenger numbers since November 2014.

Olivier Jankovec, Director General ACI EUROPE commented “Summer is ending and we can look back at some very good months for passenger traffic at Europe’s airports. Within the context of still sluggish economic recovery in the Eurozone and risk of contagion from the slowdown in China and other emerging markets, oil prices are likely to remain the decisive factor for air traffic in the coming months. In limiting potential price hikes, the scale of global oil oversupply certainly gives us some comfort when looking at the months ahead.”

The airports which reported the highest increases in passenger traffic during the month of August (compared with August 2014) are as follows: