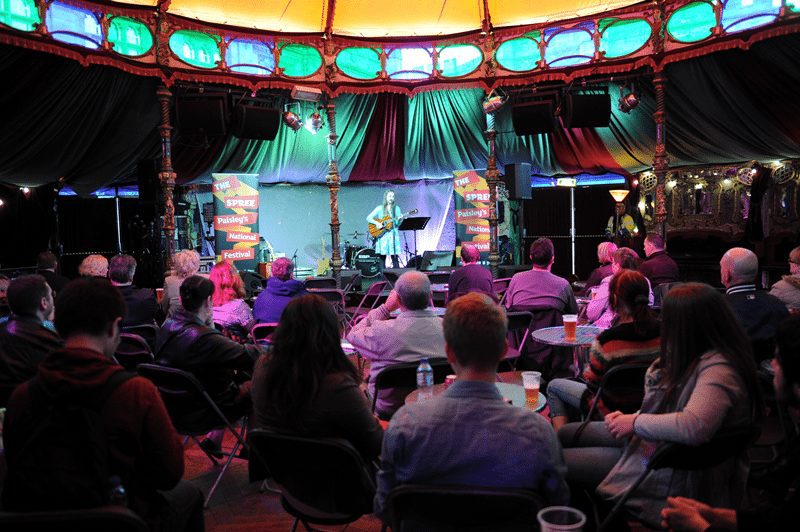 TALENTED acts from Renfrewshire and beyond are getting the chance to appear on the bill at this year’s Spree festival.

The annual event – on in Paisley this October – will see the return of the Danny Kyle Open Stage made famous by Glasgow’s Celtic Connections event. The stage – named after the Paisley-born folk legend – will be broadcast live on Celtic Music Radio each night, and aims to provide a platform for the best unsigned musical talent.

It will take place every weekday of the festival in the specially-erected Spiegeltent in County Square at 5pm each night, and will be free to enter.

The best acts from the week will be invited back to attend the final-night showcase on Friday 16 October.

The top prize for the winner is a full day (eight hours) recording at Paisley’s Brick Lane studios, while two other acts will be selected to receive a session on Celtic Music Radio.

You can download an application form now via the Danny Kyle Open Stage page in the What’s On section of www.thespree.co.uk

The event’s organiser and presenter Liz Clark said: “The Danny Kyle Open Stage has been a great platform to launch many an artist over the last 16 years, with over 3,000 applications and 1,400 acts having appeared on the stage.

“It has made sure talent and music gets out there and I would encourage all musical talent from Paisley and Glasgow to get their application in by 26 September to hopefully find a slot.”

The Spree festival is run by Renfrewshire Council as part of the push towards the area’s bid for UK City of Culture 2021.

The musical centrepiece of this year’s festival is a sold-out show in Paisley Abbey with Scottish rockers Idlewild alongside the Royal Scottish National Orchestra.

There will also be two Best of Scottish Comedy shows in association with The Stand Comedy Club and a full programme of children’s events for the October week.

Renfrewshire Council Leader Mark Macmillan added: “We are delighted to welcome the Danny Kyle Open Stage back to Paisley for another Spree.

“It has provided a great platform for unsigned talent in years gone by and I am sure this year’s event will help unearth even more stars of the future.”