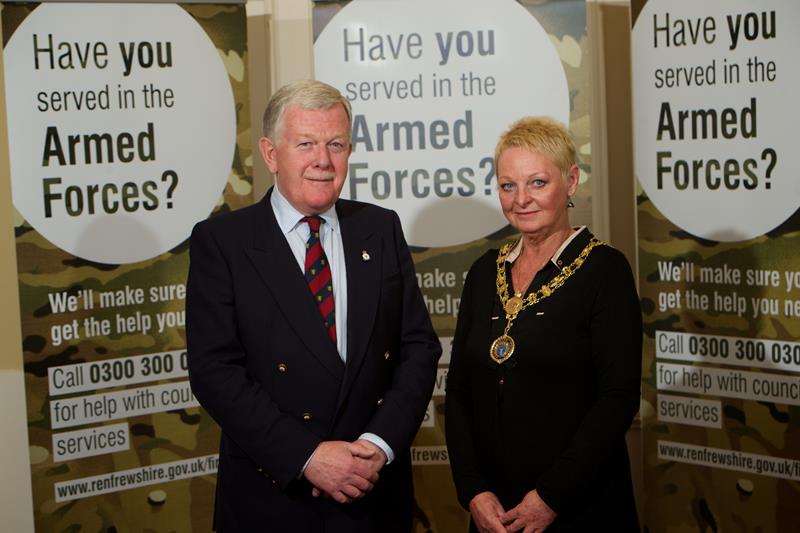 Veterans Scotland brought a national roadshow to Paisley Town Hall this week to meet with representatives from Renfrewshire, East Renfrewshire and Inverclyde councils. Over 90 delegates from councils and veterans’ agencies were on hand to discuss the experiences of those leaving the Armed Forces.

Renfrewshire’s Provost Anne Hall opened the roadshow and said: “Adjusting to civilian life can be difficult for veterans and their families. It’s important that people working for councils, who provide so many vital services in housing, social work and other areas, understand this.

“Support for veterans is one of the key commitments of Renfrewshire Council and our colleagues in East Renfrewshire and Inverclyde. We have a Community Covenant with the Armed Forces pledging mutual support and we are determined to do all we can to provide practical help and support and make that pledge a reality.”

Earlier this week, Renfrewshire Council’s Leadership Board agreed to disregard War Disablement Pension income when calculating client contribution to non-residential social care costs, closing a loophole which had been affecting some veterans.

Lt Col Neil Morrison OBE, Veterans Roadshow Project Manager, said: “We know that whether veterans have been ‘in’ for 3 years or 30 years, or ‘out’ for 6 weeks or 6 years, problems will arise and that they could use some help. With over 50 veterans’ organisations in Scotland alone and multiple public and third sector agencies providing support, it can be difficult finding just the right person to help – so the roadshow ensures all these agencies know about each other’s work and can signpost veterans in the right direction.”

Jane said: “When we use the word ‘veteran’, there’s a common assumption we’re talking about an elderly generation who served in earlier conflicts. But ‘veteran’ describes anyone leaving the Services and, in the majority of cases, we’re talking about young men and women in their late 20s or early 30s who have served for four to six years. We’re also reaching out to reservists because there’s also a common misconception that they don’t need or deserve the same support.

“Often, these young men and women are proud of how they can look after themselves, and reluctant to be seen as asking for a hand-out. But this is help and support they are entitled to, same as anyone else. It’s not about seeking an advantage for those who have served, but making sure that they aren’t disadvantaged.”

More information about support for veterans is available atwww.renfrewshire.gov.uk/firmbase