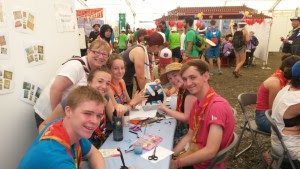 Paisley & District had five members attend the World Scout Jamboree in Japan. Over the next few weeks we will be hearing from each of the members on their experiences on the trip of a lifetime. Our third reflection piece is from Helen Dykes who is a Cub Scout Leader & Training Advisor with the 15th Paisley – Lylesland.

“From our visit to Tokyo, a vast city, to Hiroshima Peace Park and then the journey in between by bullet train Japan was just incredible to see. I was also shocked to see how beautiful the countryside in Japan is. I didn’t know what I expected but it was so green and hilly and in a way similar Scotland which I had not expected. “From our visit to Tokyo, a vast city, to Hiroshima Peace Park and then the journey in between by bullet train Japan was just incredible to see. I was also shocked to see how beautiful the countryside in Japan is. I didn’t know what I expected but it was so green and hilly and in a way similar Scotland which I had not expected.

“The best bit however for me was the Jamboree site and my patchwork base. To be able to have an input into the young people’s experience of the jamboree and see them develop was rewarding. To be able to chat to so many young people (sometimes in broken English and sign language) and hear all about their scouting life in their country was just incredible.

“Our target for the patchwork was 156 squares and the hope that we got as many countries as possible to contribute. Within days we had about 10 countries and a few rows complete. We had a visit from my pals at Unit 63 Clyde & Unit 65 who I had been working with for the past two years and they made some wonderful patches. One leader left a challenge for me a- picture of what she wanted and I was to make it… I need to teach her to sew!!

“The next challenge was to get Australia to complete squares from all continents so I was sent out on a mission in our huge marquee to find some Australians. Due to the vast number of young people I was able to also find Scouts from Peru, Mexico, Chilli, Saudi Arabia, Sri Lanka in all we managed to get a contribution from 51 different countries and all 156 squares complete a huge achievement.

“Don’t get me wrong as the Jamboree is so large you can sometimes feel quite lonely as you are not necessarily with the rest of the people you knew and came with or your tent buddies due to shift work. However when you get over this and realise this is what a jamboree is like you make the most of chatting to the other 34,500 people you don’t know yet!! Wither it was sitting having an ice cream in the garden centre/shop/cafe/petrol station/restaurant (off site by a few yards but the best place ever for food, ice cream and a beer when you finished work a change from water!!) you just talk to people and make friends with other IST for all over the world and also the thousand of Japanese people who were daily visitors to the jamboree site.

“And if you are wondering what will happen with the patchwork it is currently being sewn together and will be quilted and go on display first in Sheffield and then I hope I will get a loan of it to display and show the units from Scotland.”

Glasgow News? Daily Updates part of our network
Council Leader says Prime Minister is out of step on refugee crisis