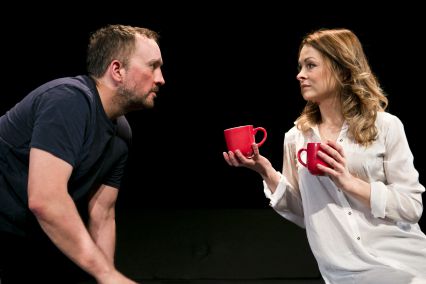 A sparkling contemporary sex comedy by celebrated poet and playwright Liz Lochhead will be performed in Paisley Arts Centre on Tuesday 6 October.

A co-production with Cumbernauld Theatre, What Goes Around is a Scottish spin–off of La Ronde, a hundred year old, highly controversial play that examined the sexual morals of its day through a series of encounters between pairs of characters. What Goes Around follows day one of rehearsals of La Ronde, where an older married actor and a younger, single actress sit down together for a drink to break the ice and one thing leads to another..

The play features two actors, Keith Fleming, (Black Watch) and Nicola Roy (Hope Springs, River City) who play seven characters in this entertaining drama, which examines the guilt, the lure of the forbidden and the real story behind these infidelities.

Liz Lochhead is one of Scotland’s best known poets and dramatists, who became the Scots Makar (or national poet) in 2011, succeeding Edwin Morgan. Her previous works include Blood and Ice, Perfect Daysand Mary Queen of Scots Got Her Head Chopped Off.