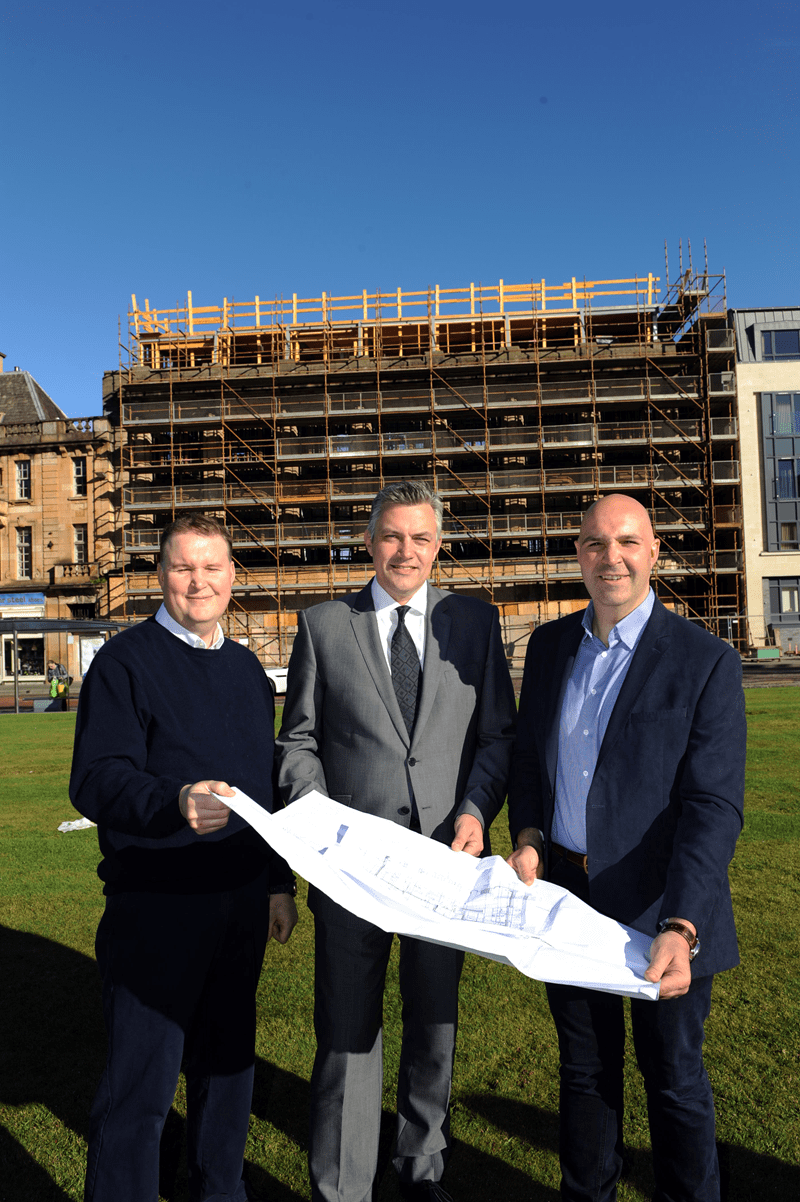 Paisley’s iconic Arnotts building is being brought back to life by the owners of several of the town’s most popular restaurants.

The Cardosi brothers will next summer open a new 120-seat restaurant covering the entire ground-floor unit in the former Gauze Street store, in what is being hailed as a ‘sign of the town’s centre’s ongoing rebirth’.

The new venture – to be titled Pendulum Bar and Grill – will offer a British and continental menu, complementing the Cardosi family’s existing Italian restaurant in Storie Street.

The restaurant is part of a much bigger development on the site, with work set to finish this year on 11 luxury apartments on the upper floors overlooking Paisley Abbey and Town Hall – most of which have already been snapped up.

Earlier this summer, residents moved into 31 new flats on the corner of Gauze and Lawn Streets, owned by Link Housing Group.

Renfrewshire Council Leader Mark Macmillan met with Stefano and Riccardo Cardosi – whose family has run businesses in the town since the 1920s – to see inside the unit, which sits inside the listed façade on Gauze Street.

And Councillor Macmillan said: “We are thrilled that someone whose name is as well-known and well-regarded in the town as the Cardosi family has agreed to lease the retail unit in the former Arnotts store. “For years, the Arnotts site stood as the most visible gap site in the town – but for us to now fill that gap with a development of this quality is a fitting symbol of Paisley’s town centre’s ongoing rebirth.

“Of course we know there are still problems to be fixed but the signs of progress are now all around us – take a look at the number of new residents and businesses in the area around the Abbey for example.

“As the town’s bid for UK City of Culture 2021 takes shape we hope to create even more opportunity for traders to thrive – and for businessmen such as the Cardosis to be investing in this way is a vote of confidence in where Paisley is heading.”

Stefano Cardosi added: “Things in the town are moving at such a fantastic rate and we want to complement what is already available by creating a new, exciting bar and grill.

“Pendulum will offer a varied menu, beer, wine and cocktail list in a stylish, contemporary setting currently not available in Paisley.”

Brian Clarke, joint managing director of Park Lane Developments added: “We are delighted to have secured such a quality tenant. This is a really good single use for the building and we don’t think we could have got anyone better for the town.”

The new restaurant is expected to open in June of next year. For more information on Paisley’s regeneration, see www.renfrewshire.gov.uk/paisley