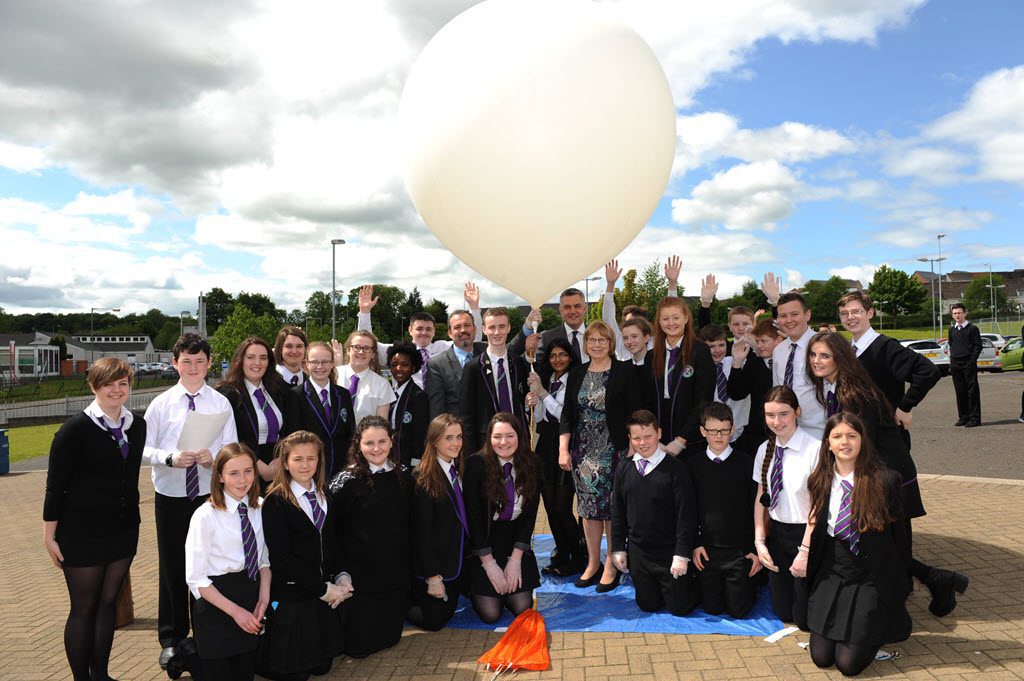 A team of adventurous pupils from St Andrew’s Academy in Paisley aim to join the space race when they launch their own weather balloon into the skies, as part of an innovative science project.

The helium-filled balloon is expected to reach an altitude of 28,000m (91,8401ft) which is regarded as near space. It is carrying a payload which includes a cactus called Scott, GPS tracking devices and cameras.

A group of pupils from S1 to S6 devised and built Project Helios over the last seven months to monitor weather systems and to examine the effects of low temperature and pressure on Scott, the cactus.

The padded pay-load bay is equipped with a parachute to ensure a smooth landing after a flight which is expected to last some two and a half hours. ‘Splash down’ is expected to be in somewhere in Dumfriesshire.

The launch at the school was attended by Renfrewshire Council Leader Mark Macmillan and Councillor Jacqueline Henry, Convener of the council’s Education Policy Board.

S6 Mission Controller, Lewis Campbell, said: “This project has involved a huge amount of work. We had a six week space bootcamp to design the payload. This type of experiment shows how accessible space is these days and shows young people the future and its possibilities.

Lewis, who hopes to be an astronaut himself one day, said, “We have two cacti, the one on the balloon is called Scott and the control, which stays on Earth is called Mark. The cacti are named after the Kelly twins who are both astronauts. Scott will be examined by our biology department after the experiment to check the impact of going into near space on plants.”

St Andrew’s head teacher, Kevin Henry, added: “Lewis has been a star in terms of his levels of organisation. This has been a great project which has involved pupils across the whole school. It has been seven months of hard work which has included getting permission from air traffic control at Glasgow Airport for our launch.

“Project Helios has helped students to develop their knowledge of the sciences, manufacturing, project planning and design. But just as importantly it has also helped to develop their communication, team working and problem solving skills. It has been a resounding success.

The bold experiment isn’t the only science-related launch with a connection to Renfrewshire schools taking place this month – the Mission Discovery space school is set to return to Paisley for a second year.

The educational programme, run by NASA astronauts, will see 200 pupils from local schools set up camp in Paisley Town Hall and split into teams to devise an experiment to be launched on the International Space Station.

Councillor Jacqueline Henry, Convener of Renfrewshire Council’s Education Policy Board, said: “The weather-balloon launch was fascinating to see in action.

“It’s always inspiring to be out at occasions like these and to marvel at the commitment and talent among Renfrewshire’s young people.

“The Curriculum for Excellence is about helping our young people become: successful learners, confident individuals, responsible citizens and effective contributors. The team behind this experiment and St Andrew’s Academy clearly embody all these attributes.

“This experiment was particularly exciting to see because we are keen to promote science, technology, engineering and maths in our schools. The unique Mission Discovery programme is a great practical example of this.”

Mission Discovery Renfrewshire will run from Monday 29 June and will be accompanied by a programme of public film screenings and talks, with more details to be revealed soon.