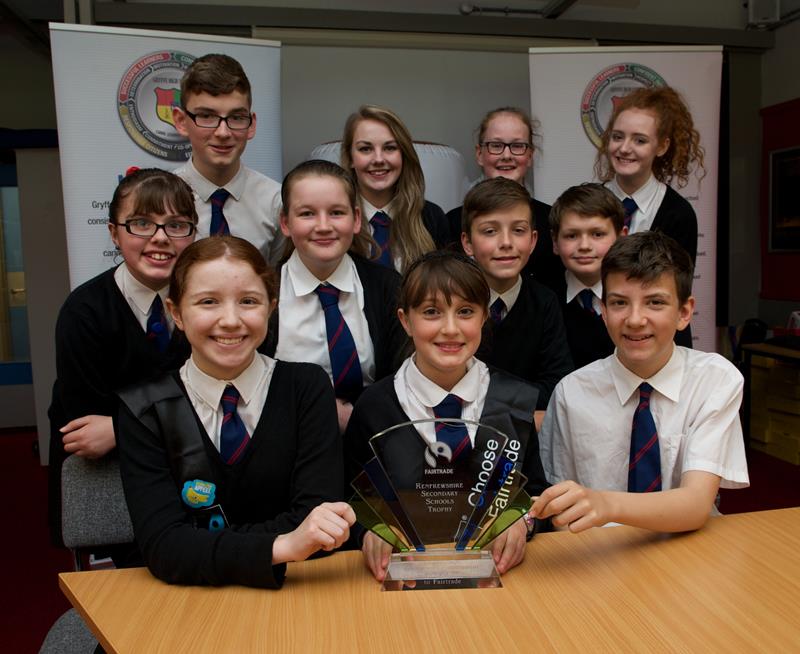 Pupils at Gryffe High School were jumping for joy when they learned they were first to win a special Fairtrade award for high schools.

Pupils raised a whopping £900 for Fairtrade during Global Diversity Month in October and Fairtrade Fortnight in February, and Fairtrade was a key element in many subjects, including modern studies, social subjects, English and religious studies.

The trophy was presented to the pupils from Gryffe High School Fairtrade Committee by Chair of the Renfrewshire Fairtrade Steering Group, Councillor Jim Sharkey, who thanked pupils for their contribution to Renfrewshire’s ongoing Fairtrade campaign.

Councillor Sharkey said: “Pupils in Gryffe have really taken the Fairtrade message that step further by making it something they do every day, so they were the obvious choice when it came to awarding this trophy for the first time. 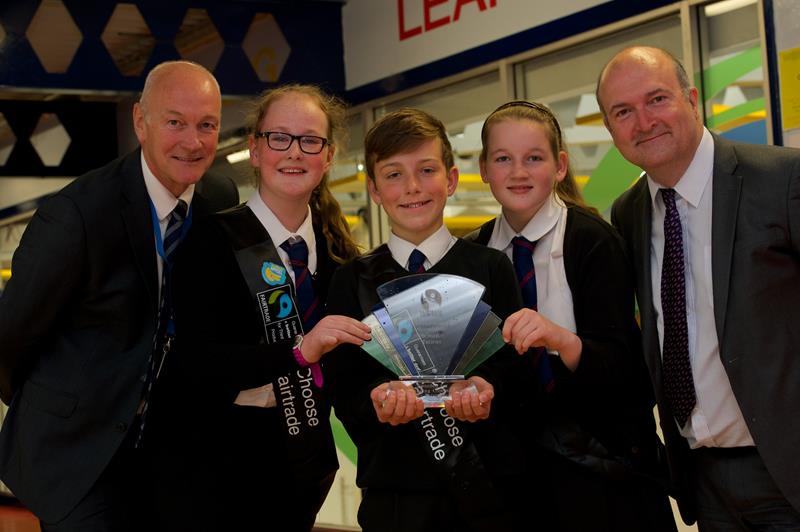 “The new award recognises the hard work pupils in secondary schools do for the Fairtrade movement, many of whom have grown up with Fairtrade throughout primary school.

“I was really impressed by the pupils’ dedication and continued support for Fairtrade. They held assemblies, learned about Fairtrade during lessons, spoke about it at the Scottish Fair Trade Teaching & Learning Network and even just getting down to basics with their very own Bake Off.

“Young people are our next generation, so it’s important that we talk with them about the impact Fairtrade makes for millions of people across the world, helping them to learn about global issues and how we all have a responsibility to help where we can.”

High schools put forward a portfolio of their work during the past year to win the award, which will be awarded annually to the secondary school that does the most for Fairtrade in the last year.

Gryffe’s Head Teacher, Colin Johnston added: “We are delighted to receive this award in the very first year it has been presented. The award recognises the hard work of pupils and staff, as well as the support of our parents.

“The school has had Fairtrade status for six years and we continue to strive to improve our curricular coverage to celebrate and highlight Fairtrade through a wide range of whole school events and inputs from a variety of subjects. The staff and pupil bake offs earlier this year for Fairtrade Fortnight was particularly memorable.

“Fairtrade has become a key focus for global citizenship within Gryffe High School and it has also given many opportunities to our pupils to achieve successes and to experience leadership roles.”

Fairtrade helps to improve the lives of producers in developing countries by guaranteeing them a fair price for their goods, such as nuts, cocoa and rice.