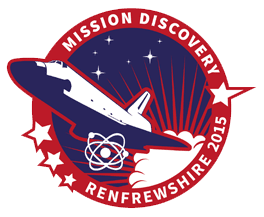 Renfrewshire residents are gearing up for a special week of space-themed events – with a NASA astronaut dropping in to help residents separate science from fiction.

The free programme of film screenings and public talks is being laid on to mark the arrival of the week-long Mission Discovery space school for local pupils in Paisley Town Hall.

The free-to-attend event – in Paisley Town Hall at 7.30pm on Tuesday 30 June – will see Steve and Sarah talk the crowd through scenes from the film and how they relate to their own experience of space.

There will also be a programme of film screenings, with Monday 29 June seeing a one-off cinema marquee set up in Abbey Close for a showing of Matthew McConaughey’s 2014 blockbuster Interstellar.

Wednesday 1 July will see a double bill at Paisley Arts Centre, with a solar viewing outside the building at 6pm, followed by a screening of Danny Boyle 2007 sci-fi thriller Sunshine inside the arts centre at 8pm.

And on Friday 3 July there will be a full showing of the film Gravity in Paisley Town Hall, starting at 7.30pm.

All the film and talk events are free to attend, but visitors should reserve a ticket in advance, either in person at Paisley Arts Centre or by calling 0300 300 1210.

There is no need to reserve a ticket for the solar viewing, just turn up on the night.

Renfrewshire Council Leader Mark Macmillan said: “Mission Discovery is a once-in-a-lifetime experience for our young people to learn more about science from people who have been literally out of this world.
“We wanted to celebrate the fact we are hosting an event of this scale and quality by laying on something space-themed the wider public could attend.

“The opportunity to hear a Hollywood sci-fi blockbuster dissected by people who have actually been in space is one not to be missed, and I would encourage people to turn out and enjoy the week’s events.

“We hope to be hosting many more unique and interesting events like this as we work towards Paisley’s bid for UK City of Culture 2021.”

Mission Discovery will see almost 200 youngsters work with NASA astronauts and scientists to design their own experiments, with the winning entry to be launched aboard the International Space Station.

The space school is returning to Renfrewshire for a second year, and is hosted by Renfrewshire Council as a way of encouraging interest in science and technology.

Glasgow News? Daily Updates part of our network
Winning’s a Piece of Cake for Pro-Lifers