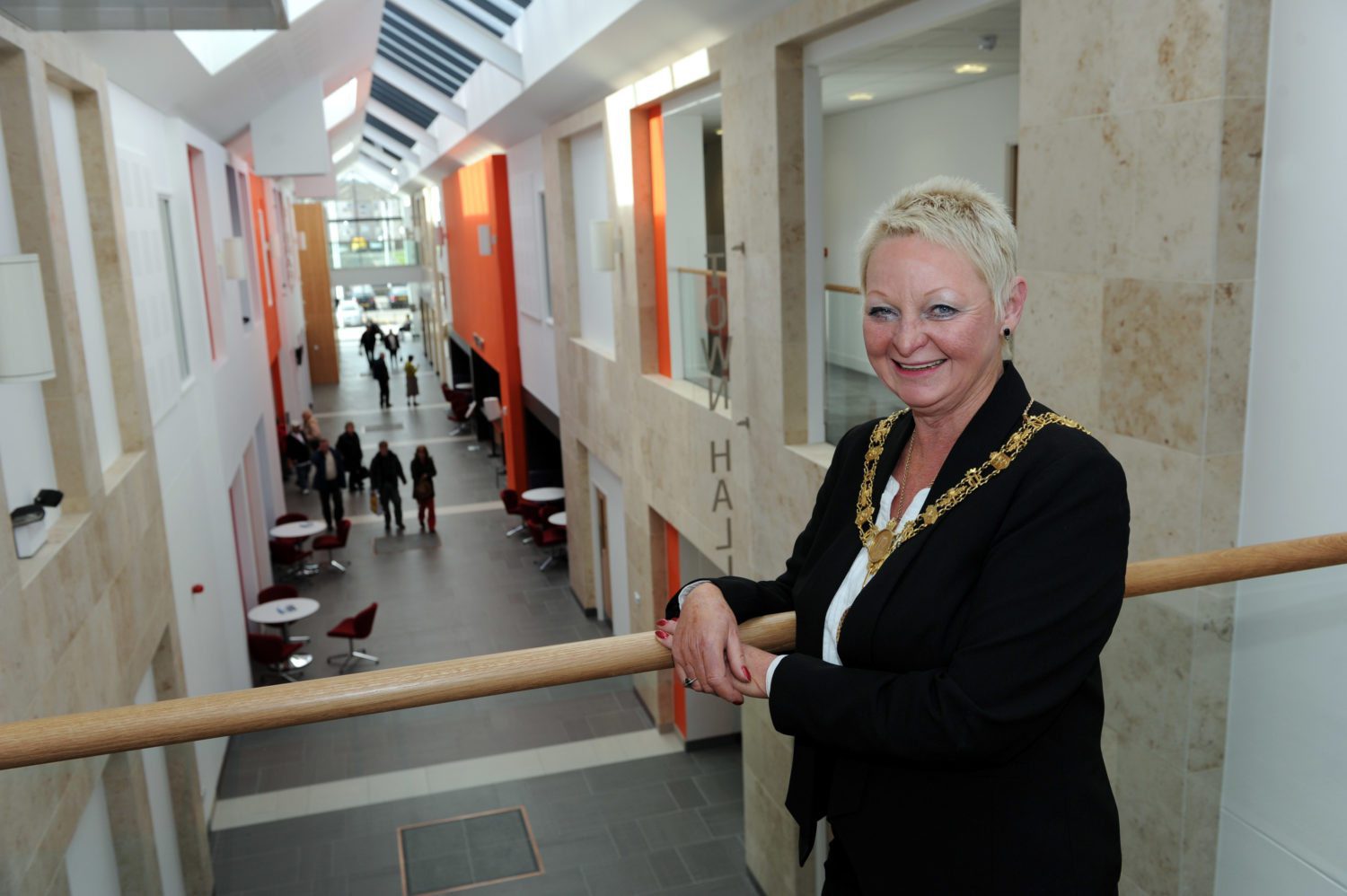 Johnstone residents are this week getting their first look inside their new town hall – and the building has been given the thumbs-up by its first visitors.

The striking glass-fronted £14.5m development has changed the face of the town centre as it has risen from the ground over the past 18 months.

The building – recently named Public Building of the Year at the Scottish Property Awards 2015 – has been taken forward by Renfrewshire Council to spearhead the regeneration of the town centre.

And Renfrewshire’s Provost Anne Hall was on hand to meet some of the first customers when the building opened its doors for the first time.

It also offers several council services under one roof, including a customer service centre, housing and social work offices, and AdviceWorks, while Police Scotland and Macmillan Cancer Support are also based in the building.

Provost Hall added: “The building has already won awards for its design, and looking around you can see why – it is bright and open and looks fantastic.

“The building and artwork within were designed in partnership with the people of Johnstone, so this is their building in more ways than one.

“It was great to be here on the day it opened and to see the reaction of residents who will enjoy using these facilities for generations to come.

“Staff were telling me they’ve had hundreds of people through the doors in just the first few hours, and the reception has been really positive.”

Mum Lisa Hopcroft from Kilbarchan, who had popped in to see the library with her daughters Lilias, four and Rona, two, added: “It looks great – it’s a really nice community space for people to use.”

The building project – delivered on time and on budget – also included major improvements to the area around the building, while a community benefits programme saw local jobs created.

Council leader Mark Macmillan added: “The council made a massive financial investment in the town hall, which has been among the most significant public-sector building projects anywhere in Scotland over the past few years.

“We prioritised that investment in order to drive forward the regeneration of the town centre.

“We want this building to act as a catalyst for private-sector investment in the surrounding area, and are working with the relevant people – such as the landlords of the shopping arcade – to help make that happen.”

The building won’t be fully operational until later this year, but the library, customer service centre and main halls are all open now.

The council’s housing and Advice Works staff are already based in the building, having moved from their former homes in Floors Street and Collier Street.

Social work staff are still in Floorsburn House but move to new building on Monday 30 March, while the registrars’ service won’t move from Macdowall Street until Monday 10 April.

Bookings are now being taken for small-scale functions within the hall, with bookings for bigger functions being taken from May. For more information, call 0300 300 1210 or email eventhires@renfrewshire.gov.uk

An official opening will take place later in the year. For more information on the new town hall, visit www.renfrewshire.gov.uk/johnstone

Fantastic entertainment in the Hoose this weekend
Scroll to top