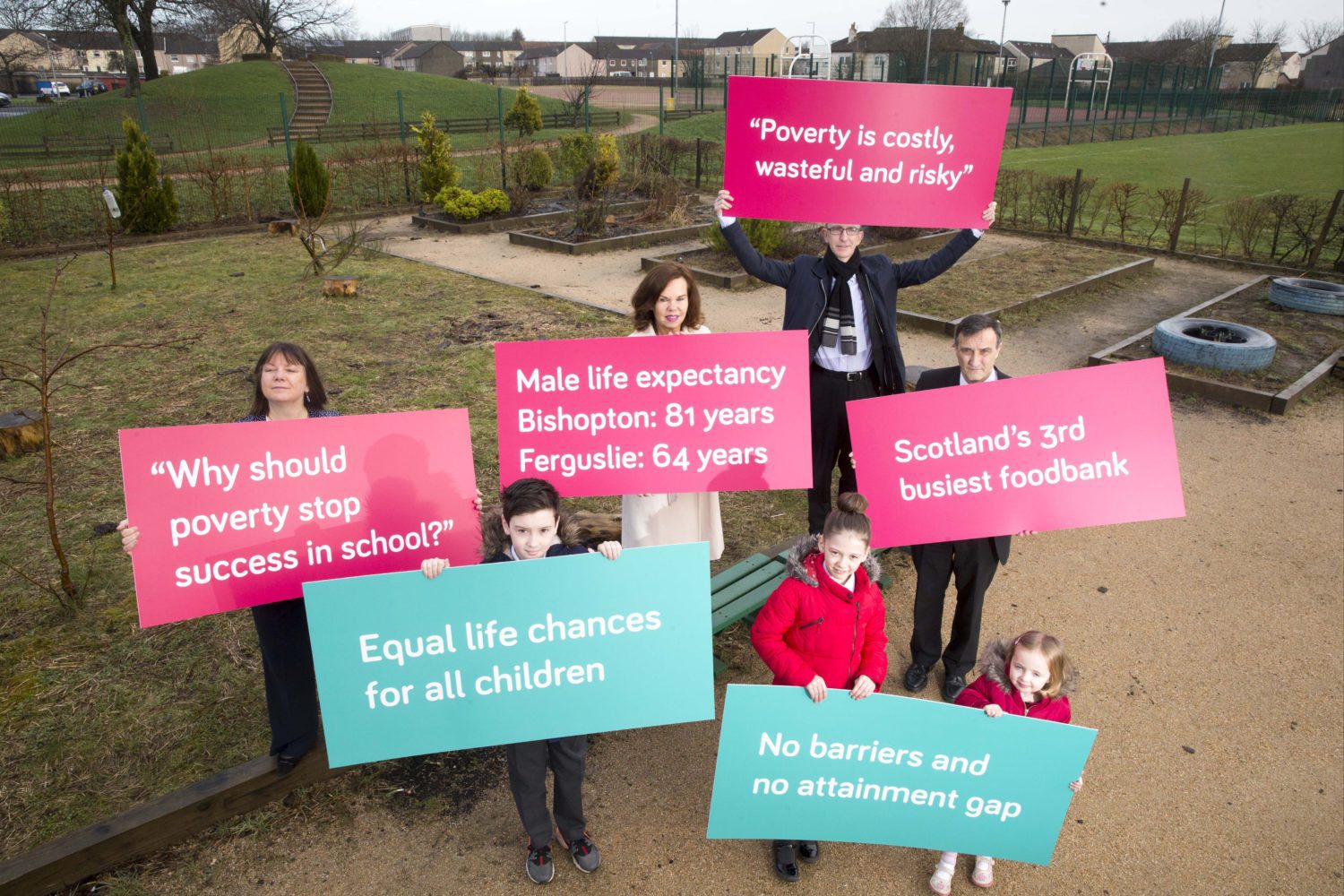 A pioneering child poverty commission has called on the UK Government to re-think its benefit sanctions system and trial a new approach in Scotland as part of a 24-strong list of recommendations announced today.

The direct challenge to the UK government to set up a pilot in Renfrewshire marks a unique approach to tackling poverty.

Renfrewshire’s Tackling Poverty Commission – the first of its kind in Scotland to look specifically at child poverty at a local level – reports its findings with a call to action to Renfrewshire and beyond to step up the fight against child poverty.

It is calling for more to be done to lift families off the breadline and curb the sharp rise in the working poor throughout Renfrewshire – an area that’s home to pockets of the most deprived zones in Scotland.

The Commission wants to change the fact that one in five Renfrewshire children live in poverty with a range of measures including a stronger focus on closing the attainment gap between pupils from high and low income families and making sure nurseries offer more flexible childcare.

It also wants more people to be paid at least the Living Wage of £7.85; more resources targeted to improve the health of babies who live in poverty; a new approach to neighbourhood regeneration; a review of the cost of the school day, and for deprivation levels to be linked explicitly to the way Scottish education resources are allocated.

The Commission’s key recommendations include:
-Halve the number of workers in Renfrewshire paid below the Living Wage.
-Ensure nurseries offer flexible, quality childcare that’s used by low-income families.
-Tackle the ‘poverty premium’ that sees low income consumers paying higher prices. -Explore the scope to offer free transport to help people get to a new job.
-Ensure local people are at the heart of community regeneration.
-Target more resources to health visiting and projects like the Family Nurse Partnership to improve the health of babies and their mothers who live in poverty
-Link deprivation levels with the way Scottish education resources are allocated.
-Re-think benefit sanctions and trial a new work incentive approach in Renfrewshire.
-Bring primary care providers together with advice providers and co-locate where possible.
-Roll out the successful Healthier, Wealthier Children (financial support programme for new mums) across all primary care and community services in Renfrewshire.
-Establish new approaches and expand successful interventions in schools to reduce the attainment gap, with a focus on reading and writing, and closer family involvement.
-Reduce the cost of the school day
-Improve data sharing of children’s language development reviews.
-Develop innovative and creative partnerships and increase resources for neighbourhood regeneration

Councillor Mike Holmes, Chair of the Commission, said: “It’s a sad fact that in 2015, one in five Renfrewshire children live in poverty. No one should have to skip meals to feed their children – but that’s what’s happening here. We have the third busiest foodbank in the country, and enough is enough. We cannot leave behind another generation because of the inequalities poverty brings.

“Child poverty across the country is predicted to rise, and we want to buck that trend in Renfrewshire. The council brought together experts and front-line workers to form the Commission – to be a critical friend to the council, its partners and to the wider public sector. This fight to break the poverty cycle is everyone’s responsibility.

“We gathered a significant amount of evidence. And we know that while there are still areas in Renfrewshire facing high deprivation levels, the face of poverty is changing with more households living in poverty now working than not. We also heard evidence that the welfare system no longer provides a safety net for the people it’s supposed to support and is actually pushing them into crisis.

“Benefit cuts will take £58m a year away from Renfrewshire with Paisley North West set to be one of the hardest hit areas in Scotland, and Paisley Job Centre has the third highest number of benefit sanctions in Scotland.

“Research makes a clear link between sanctions and foodbanks, so when you reach the point that children go hungry because a so-called work incentive removes their parent’s only income – something has gone very wrong. That’s why we’re asking the UK Government to produce and trial a new approach to benefit sanctions and work incentives in Renfrewshire.”

Jim McCormick, Scotland Adviser to the Joseph Rowntree Foundation (JRF), was part of the Commission. He said: “Poverty is costly, wasteful and risky, and Renfrewshire cannot afford poverty. Unfortunately, the gap between how well children from low and high income households will do in life, starts at a young age – and that’s why we must make closing the gap an absolute top priority.

“More households need to have access not just to work – but to work that provides an acceptable standard of living and opportunities for progression. Too many people are at the mercy of low pay and insecure contracts. We need more people to be paid the Living Wage, wider access to in-work training and quality childcare that helps parents into work.

“This week, JRF published findings that show while the job of reducing poverty continues to be done against a backdrop of tightening austerity – areas with high levels of deprivation are being hit hardest by spending cuts. While Renfrewshire is no different in facing tough financial decisions, it’s leading the way in its approach.”

The Commission was initiated by Renfrewshire Council in April 2014 to bring a fresh and independent approach to consider how best to break the poverty cycle by leaving a legacy of recommendations that could shape a local partnership movement against deprivation, and which also have the potential to influence national policy.

Today, the Commission formally asks the Renfrewshire Community Planning Partnership to take on progression of its report and recommendations.

It also recommends organisations change how they work to address stigma, involve people, make services easier to access, use evidence to focus resources on what’s proven to work, and to combine resources to target inequality.

On 23 March, Renfrewshire Council will meet to discuss the report’s recommendations and consider the council’s immediate and longer term actions.

The rate of Jobseekers Allowance sanctions has more than doubled since 2010 and Paisley Jobcentre has the highest number of sanctions in the West of Scotland.

The woman, in her 40s, had been receiving JSA and looking for work for just over two years after ending a long-term relationship, when she received a letter in 2012 from the DWP, telling her she’d been sanctioned because she was late for an appointment at Paisley Jobcentre.

She then lost her JSA payment of £120 a fortnight, for six weeks. She was only a few minutes late for her appointment but was kept waiting so the appointment started ten minutes late.

She said: “When you go to the Jobcentre, they make you feel like they’re giving money out of their own pocket. And if you’ve not looked enough for jobs that week, or if you’re late, they tell you ‘we can stop your money’. When I was late there was a big hum and haw about it.

“The personal adviser had to get her supervisor and I had to write and sign and date why I was late and there had to be a reason. They spoke about me as if I wasn’t there, saying ‘has she been late before?’ and said it had to go to a decision-maker. So they told me my money could be cut and I would be told by letter.

“I had to go home and wait…then I did get a letter telling me I had been sanctioned because I had been late and I didn’t have a good enough reason. So you have no money to live on. Even though its £120 a fortnight, they’ve got control over your life.

“I went through domestic violence and it’s the exact same feeling you get. You’ve got to act a certain way – say ‘oh I’m really sorry I was late…you’re right…I’ll never do it again’. You leave there feeling rotten. You can’t be assertive because they’ve got your money and you need it to live on.”

When the woman was sanctioned she barely ate, didn’t heat her home, relied on friends for help and borrowed from door-to-door lenders. She is now in work and has been since 2013. Even though her hours are irregular, she said she would rather go hungry than sign back on for benefits.