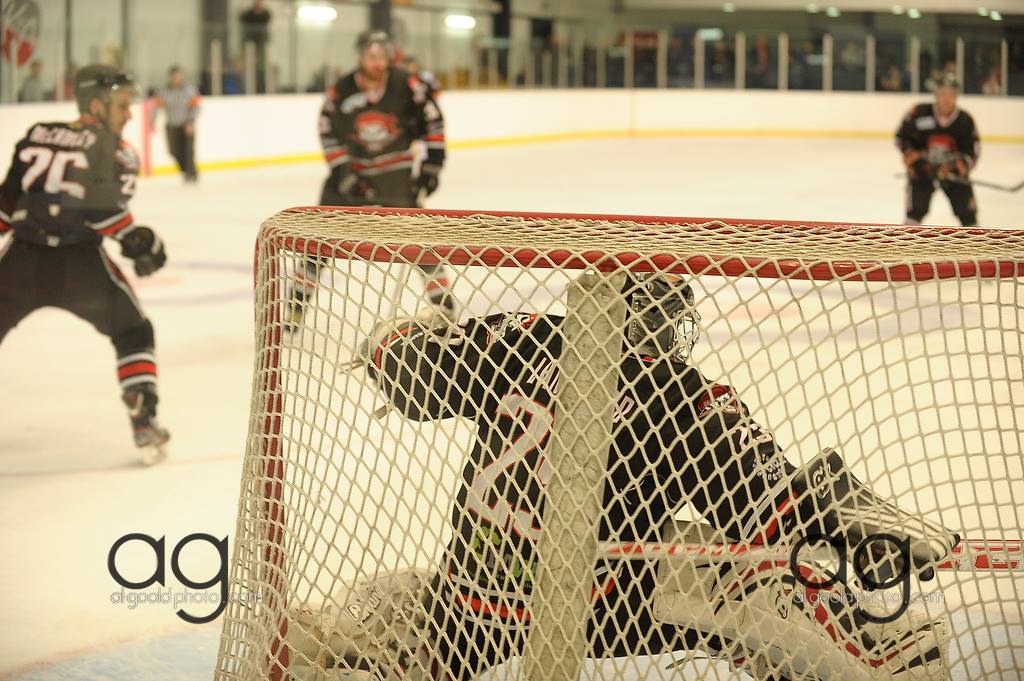 Shorthanded Pirates pulled off a stunning 5-3 win against North Ayrshire Wild, the visitors’ bench being ravaged by injury to the extent that they could only ice 13 skaters, including several walking wounded, for this local derby.

The visitors were on the board in the 6th minute as Orr top shelved a shot beyond Galloway to put Pirates one up, but after they has played off a penalty called on Cowan for Hooking, the scores were tied after 12 minutes as Bain equalised in a first period where Pirates possibly had the better of the exchanges against a side desperate for the two points to clinch a place in the playoffs.

Wild had the better of the early exchanges in the middle session, although Riddell missed a good opportunity for the Renfrewshire side after 25 minutes, and with the teams swopping penalties around the halfway point Pirates had Langford to thank for an outstanding save a minute later, before they took the lead after 36 minutes as McCamley smashed a low shot home to give his side the advantage again. Almost immediately, they were a player short, with Riddell going for Hooking, but within seconds Blair had broken away and deftly rounded Galloway to put his team two clear. The home side were still on the powerplay, however, and pulled one back in highly controversial circumstances as Langford appeared to have pulled off a tremendous save form Abercromby, but the goal judge flashed his light and a goal was awarded after considerable debate, with the goalie clearly gesticulating to the official that the puck had not crossed the line. Pirates were still recovering from that blow and 20 seconds later it was 3-3 as Maitland tied the scores. The visitors dredged on their reserves in what had been a tiring end to the session and Orr blasted home with only 6 seconds remaining to send his team in with a narrow 4-3 advantage.

Player/coach Ian Turley, who had reported ill for this match, but had played as an emergency defender because of player shortages, was unable to continue, leaving Pirates with only 3 recognised defenders for the final session, and they had to withstand some pressure from the hosts who remained desperate to keep their season going with a win. Gibson missed a great chance to equalise when going one on one with Langford only to miss the target, before Graham McCamley gave the visitors vital breathing space with a fifth goal in the 52nd minute. Pirates appeared to be under the cosh in the 53rd minute as Cowan, and then Chris Turley, were penalised within 4 seconds of each other, giving Wild a two man advantage for almost 2 frenetic minutes, but by a combination of last ditch defending, inspired netminding by Langford, and a fair slice of luck, their goal remained intact, and a very tired looking Pirates played out the remaining minutes to record a quire remarkable win.

Glasgow News? Daily Updates part of our network
How can you invest in your local economy?