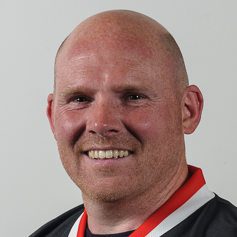 Paisley Pirates’ fans attending Sunday’s playoff quarter final against Aberdeen Lynx at Braehead Arena will say goodbye to one of their favourite sons, following the news that captain John Churchill is hanging up his skates at the end of the season.

The popular hitman, a stalwart with the club for a number of seasons in a career spanning four decades, will play his last home game for the club as they battle for a place in the end of season playoff weekend in Kirkcaldy.

“Yes, we were all a little sad when John told us this was definitely his final season in competitive ice hockey,” said coach Ian Turley. “He’s been playing with us for a long time now, so long in fact that he became regarded as an automatic selection. Sure, he’s got older, like the rest of us, but his level of fitness has never been in question, in fact, he can still put a lot of guys to shame when it comes to lasting 60 minutes”

“John’s certainly earned his place in the club’s history, as not only did he score the first goal and set us on his way when we won the Scottish Cup 10 years ago, but he also led the club to their first championship title in 20 years just two seasons ago. His attitude has always been first class, he’s a real leader in the dressing room, and folk look up to him.

“He’s going to be a real loss to the club, as not only does has he brought his playing ability to the team, all his other attributes such as his experience have contributed greatly to the success of the club. He might have been playing the game longer than some of our guys have actually been around, but he’s never, ever, lost his enthusiasm for the sport, or playing for the Pirates, and that kind of love of the game is going to be difficult to replace.”

“Sunday’s game is an important one in its own right, but it takes on extra significance because it’ll be John’s last match for the club on home ice. We’ll certainly be doing our utmost to make sure he has two more games for us after that in the playoffs, although Aberdeen Lynx will have something to say about that, and I’m hoping that fans turn out in force, and we do the business on the ice, to give him a send off appropriate to the tremendous service he’s given to the sport he loves, and to the Paisley Pirates in particular.”

I submitted this motion to the Scottish Parliament on Friday.

Motion S4M-12843: George Adam, Paisley, Scottish National Party, Date Lodged: 27/03/2015
Last Face-off for Paisley Pirates’ Captain, John Churchill
That the Parliament celebrates the career of John Churchill, captain of the Paisley Pirates ice hockey team, who has announced that he will hang up his skates at the end of the season; notes that homes fans will watch Churchill take to home ice for the final time in the playoff quarter final against Aberdeen Lynx on 29 March 2015; congratulates John on his career, spanning four decades, scoring the first goal in the Paisley Pirates’ Scottish Cup win 10 years ago and captaining the side to its first Scottish title in 2013 when the team finished the season as Scottish National League champions; notes that, after John’s retirement, Scottish ice hockey will be without a number 14 by the name of Churchill for the first time in 50 years due to both John and his dad Alex both wearing the number 14 shirt throughout their careers with Alex playing for, among other teams, Paisley Mohawks during his time on the ice; thanks John for his service to Scottish ice hockey and to the Paisley Pirates during the latter part his career, previously playing for Glasgow Saints, Nottingham Panthers, Telford Tigers and the Dumfries Vikings; wishes John well in his future endeavours, and considers that he will go down as one of the Paisley Pirates greatest players.