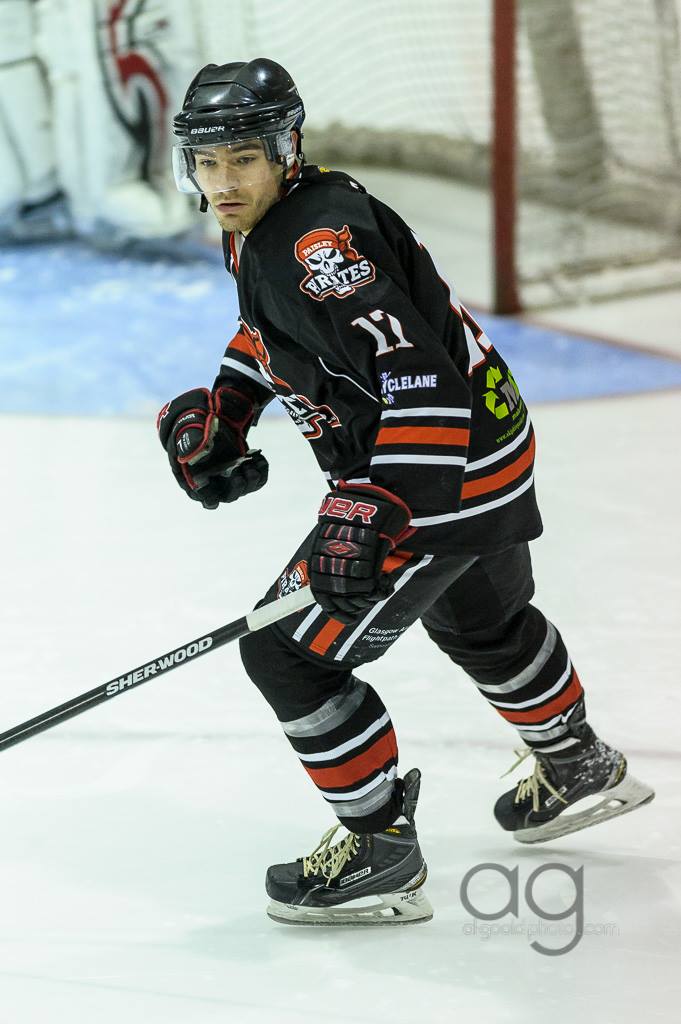 In a night of pulsating, end to end ice hockey, Pirates claimed a draw against title challengers Edinburgh, and in doing so became the first visiting side to take a point away from the Murrayfield rink this season.

Both teams set out to attack from the start, and the visitors were first to get on the scoreboard in the 10th minute as Scott Cowan fired home unassisted. It got even better for Pirates after 18 minutes, as this time defender Chris Turley was up with the forwards to slip home a pass from Johnston to send his side in at the break with a 2-0 advantage.

The expected Edinburgh fightback was delayed, however, as with less than two minutes on the clock in the middle session a Martyn Guy shot defeated Mallinson in the home goal to put the visitors three ahead. This did spark off a fightback by the home side and within two minutes it was 3-2 as first Patterson, and then Hughes, put the home side right back in the game. The goals continued to flow and at the halfway point Liam Riddell rounded off a play with McCamley and Guy to put Pirates two ahead at 4-2. The title chasing Caps retaliated in fine style, however, and a three minute treble by the Hay brothers gave them a narrow 5-4 advantage at the second break.

It got darker for Pirates within seconds of the restart as Gautschi netted to give his side a two goal advantage, but the Paisley side weren’t finished yet, as with six minutes gone David Orr scored an unassisted marker to make it a one goal game. Edinburgh came back again, but after Langford had pulled off a great save to keep the deficit at one goal, the visitors immediately broke to the other end, and Cowan converted a Campbell pass to tie the scores two minutes later. The frenetic level of activity at both ends continued right to the end, however, with neither team able to get the game winning goal, in a match which was a tremendous advert for SNL hockey.

Third placed Pirates will now face Aberdeen Lynx in the Playoff quarter finals on a home and away basis, the first leg taking place on Saturday 21 March in the North East, with the return leg at the Braehead Arena on Sunday 29 March, in what will be an interesting tie, the Lynx being one of only two teams to have beaten Pirates in league action this season.

Outside of Scotland – Three Must See Amsterdam Attractions
Scroll to top