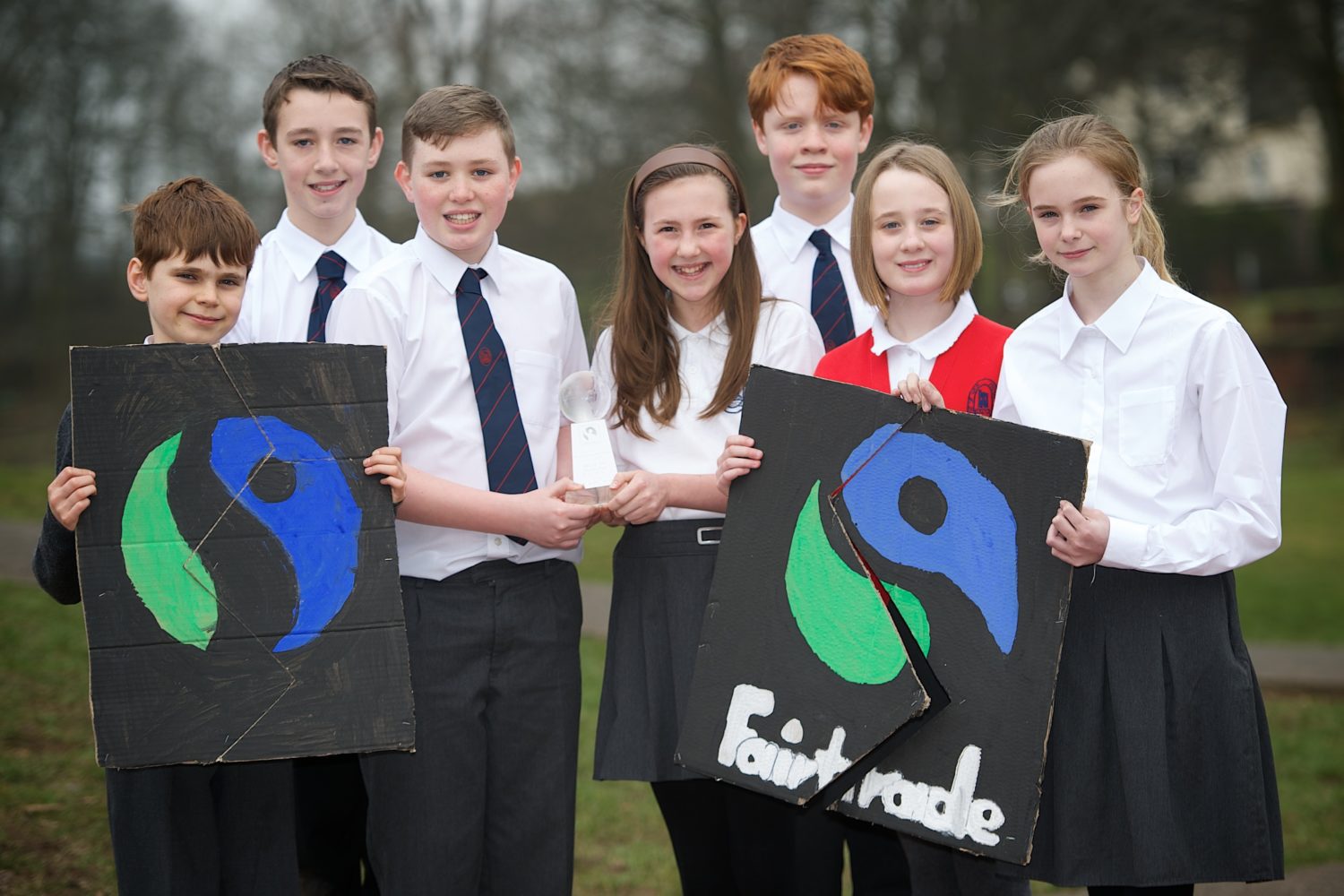 Pupils at Bridge of Weir Primary School were thrilled to learn they have been crowned Renfrewshire’s leading Fairtrade primary school.

The primary school was awarded the John McDowell Trophy for their outstanding contribution to the campaign during 2014/2015 and for successfully renewing its status as a Fairtrade School.

The trophy was presented to the pupils from the Bridge of Weir Fairtrade Committee by former Provost John McDowell, who was heavily involved with the promotion of Fairtrade during his time as a councillor.

Fairtrade helps to improve the lives of producers in developing countries by guaranteeing them a fair price for their goods, such as nuts, cocoa and rice.

Councillor Sharkey said: “Bridge of Weir was the obvious choice when it came to awarding this year’s trophy

“I’ve been really impressed by the support Bridge of Weir have given Fairtrade throughout the year, as well as the range of innovative activities they had during Fairtrade Fortnight.

“They set up a Fairtrade stall, which was supplied by Rainbow Turtle, and hosted a ‘Wear banana yellow to school’ day, where pupils wore yellow to highlight the fact only 1 in 4 bananas sold are Fairtrade.

“Helping school children to be aware of how Fairtrade impacts millions of people across the world is a great way for them to learn about global issues and how we all have a responsibility to help where we can”.

Bridge of Weir is the fourth school to receive the trophy, which was won by St Fillans Primary in Houston in 2013, Newmains Primary in Renfrew in 2012 and Clippens Primary in Linwood in 2011.

John McDowell said: “The trophy was introduced to encourage primary pupils to get involved with Fairtrade. It’s been a great way to both help those who are affected by Fairtrade, as well as encouraging pupils to come up with new ways to raise awareness of Fairtrade.”

Bridge of Weir’s Head Teacher, Carol Vallance added: “Our pupils have been really committed to raising awareness of Fairtrade and it’s been great for them to learn all about the different issues that affect others in poorer countries.

“Our choir also sang at the Community One World Fairtrade event in November which was a fantastic experience for them.”

“Another big event for us was our Fairtrade Bake Off, where pupils swapped as many ingredients as possible for Fairtrade products. It really helped raise awareness of how easy it is to buy Fairtrade and make a difference to someone’s life.

“Our pupils are really passionate about Fairtrade and you can see this through the hard work and enthusiasm they put into all the different activities they have organised for Fairtrade.”