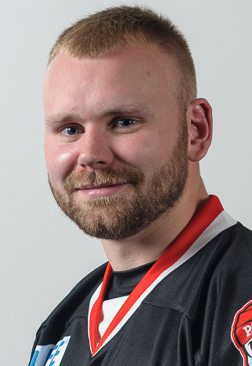 [vc_row][vc_column width=”1/1″][vc_column_text]Ice hockey players have the reputation of being tough guys, and Paisley Pirates’ defender Chris Turley certainly lived up to that image last weekend.

In the course of his team’s match against Moray Typhoons in the Scottish National League on Sunday, Chris took a challenge from an opponent, and immediately knew what had happened. “I’ve been playing ice hockey for a long time now, ever since I was a kid, picking up a few injuries along the way, and had dislocated my shoulder before. I realised it had come out again, and needed to get it sorted right away.”

Drawing on the example set by Mel Gibson in the “Lethal Weapon” series of films, he set about remedying the situation by knocking his shoulder back into place without the aid of an anaesthetic and, problem sorted, went back out to help his team to an 11-1 win.

“He’s my brother, so I know better than anyone how daft he can be,” commented coach Ian Turley“, but it just goes to show how much our guys will go through to play for the Pirates, and he does it for the love of the game.

He’s been our rock a number of times with last minute challenges and important goals, although I think he took the comparison a bit far this time! I don’t know how many players could do what he did, but he’s a very important player for us, and Sunday just showed the level of commitment which he, and indeed the rest of the squad, give to this club every time they go out to represent the Paisley Pirates. It’s that kind of attitude which shows just how special this club is, and what it means to team members to play for it.”