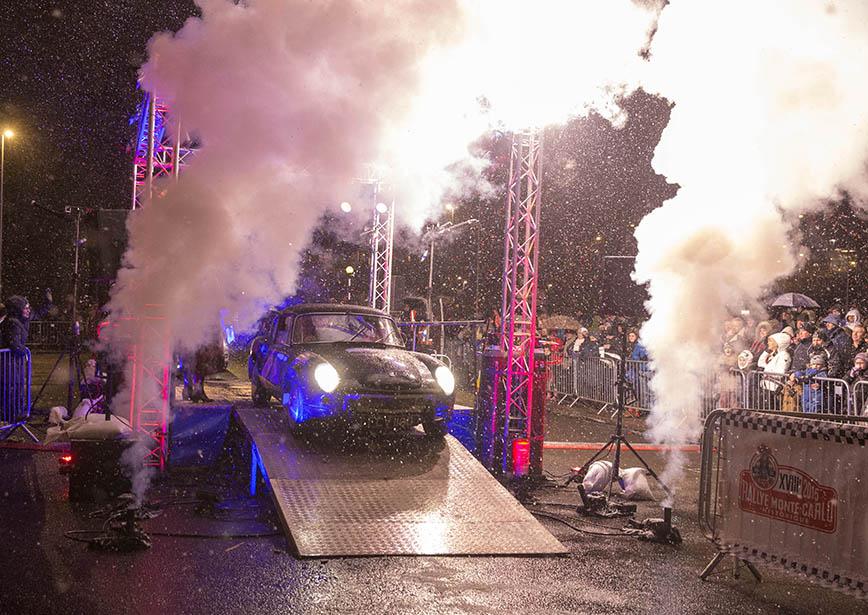 [vc_row][vc_column][vc_column_text]Paisley went classic car crazy this evening as thousands braved the weather to soak up the timeless glamour of the Monte Carlo Classic Rally.

The only UK start leg of the world-famous event saw around 70 vehicles set off from outside Paisley Abbey on the 2,688km trek over the Alps to the French Riviera.

Drivers of lovingly-preserved Porsches, Mini Coopers and Linwood-built Hillman Imps happily mingled with the public, who enjoyed getting up close to the vehicles.

Paisley is one of just five host cities for the event – the others being Barcelona, Copenhagen, Turin and Reims – helping put the town on the map ahead of its bid for UK City of Culture 2021.

The first car over the ramp was driven by Glasgow 2014 judo gold medallist and classic car fanatic Chris Sherrington, who is taking part in the rally.

And he was followed over by Caroline Carslaw, Scotland’s fastest modern lady rally driver, accompanied by a spectacular pyrotechnic send-off.

Renfrewshire Council – which was hosting the event – had laid on a programme of entertainment, with Capital FM’s Des and Jennie helping to warm up the crowd.

There was also kids’ comedy and giant games in Paisley Town Hall, as well as street entertainers out in Abbey Close.

Renfrewshire Council Leader Mark Macmillan said: “We are delighted to have welcomed this prestigious event back to Paisley after a successful debut last year.

“Our hosting of this event fits perfectly with the ambitious plans we have to use culture and heritage to drive a wide-ranging programme of regeneration over the next decade.

“That will include a bid for UK City of Culture in 2021 and events like the Monte are helping to establish the town as a key destination on Scotland’s cultural map.”

Douglas Anderson of the Rally Start Committee, added: “This was another memorable occasion enjoyed by young and old alike.

“Once again, Paisley Abbey provided a stunning backdrop to the glamour of the cars, and the public turned out to support the event.

“I would like to wish bon voyage to all the drivers currently on their way to France for the adventure that lies ahead for them.”