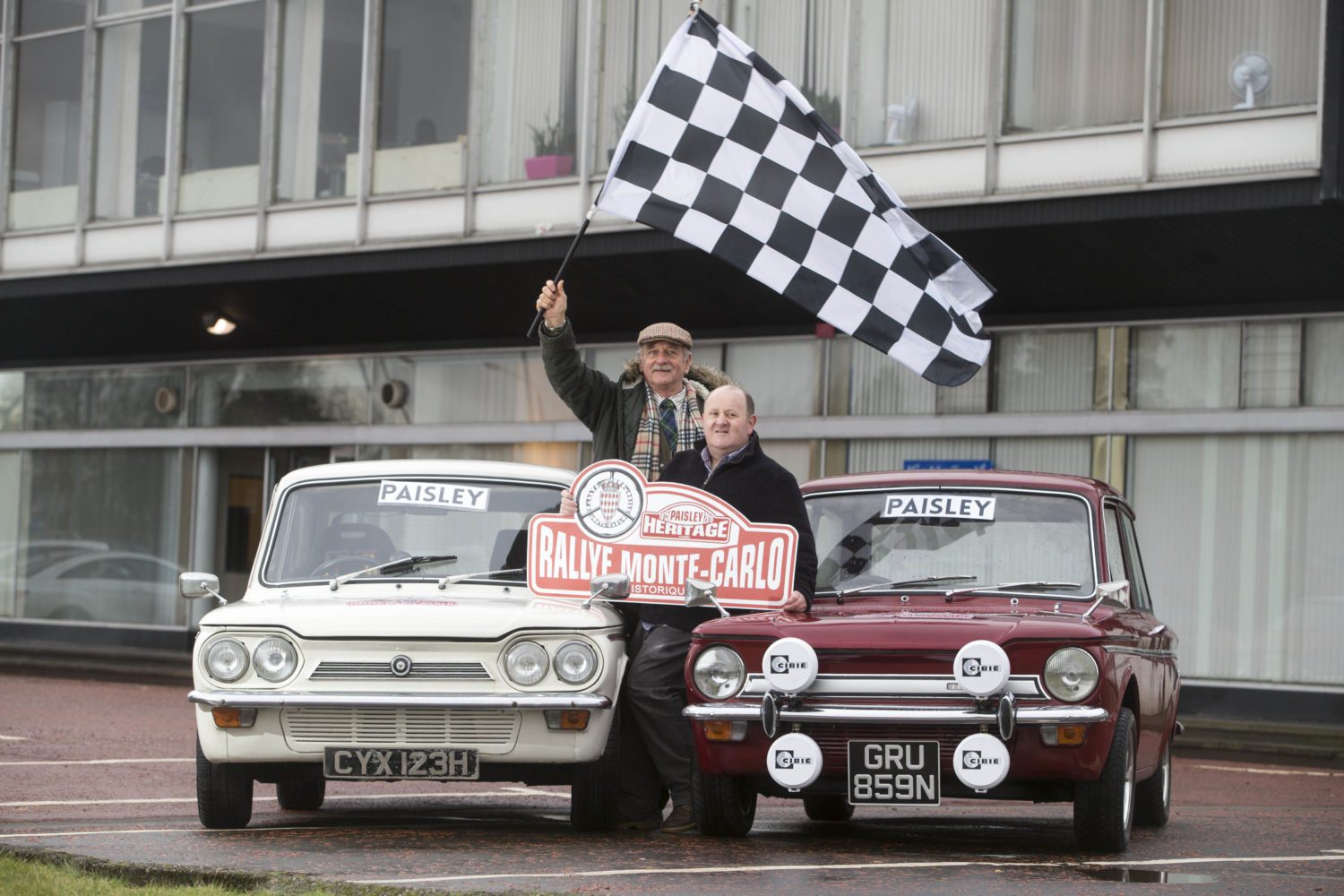 Over 10 000 spectators are expected to throng the streets of Paisley tonight (wed) to wave off competitors at the start of the 104th Monte Carlo Classic Rally.

Seventy eclectic classics from the glamorous age of motoring will cross the start ramp at Paisley Abbey bound for the French Riviera.
On the 2688 km odyssey over the Alps they will join competing cars from the other start cities of Barcelona, Turin, Copenhagen and Reims.

The pair will be one of the first to head for the Channel in a 1966 Triumph Spitfire Mark 11, assembled from a ‘box of bits’ by Chris.
The Paisley crowd will also be treated to a guest drive by Scotland’s fastest lady rally driver, 22 year old Caroline Carslaw from Ayrshire, in a car from the modern era.

“It is a real honour to be part of an event known across the globe,” said the 2013 Scottish Ladies Champion.

“I watched in 2011 and marshalled at the 2013 Start. There is a massive effort goes into staging it, a great atmosphere, and the fans see a brilliant event, right on their own doorstep.”
Competitors gathered yesterday (tues) for an official photocall at the former Rootes Group factory at Linwood, which paid homage to the region’s role in motoring heritage.

Around 6000 locals built cars such as the Hillman Imp (pictured) which put Scotland on the car construction map until the plant’s closure in 1981.

Amongst attendees at the photo-shoot was 58 year old Ranald White from Bearsden, who will be competing in the Monte for the first time.
Driving the last remaining Rover 2000 on British roads, he decided to enlist after catching the Monte bug in 2013.

“I took part in the Heritage Run support event and I basically feel in love with the Monte. As long as you have a car, a will and a little bit of bank balance, you can do it. I am a complete novice and I’ve pulled in a lot of favours to get everything ready for this, but I can’t wait now.”
This year’s rally will generate over £1 million, with hosts Renfrewshire Council building momentum towards a bid for UK City of Culture status in 2021.

For the competitors, though, reaching the sunshine of the famous casino town of Monte Carlo is all that matters.

“This is our second Monte. We were disqualified outside Valence last year because we missed one of the time trials but that just makes us more determined to complete it this time,” said Stewart Hutton (63) from Busby, who is hopeful he, his co-pilot Shaun Hanlon and their 1965 Austin 1800 will make it all the way to the Principality.

“I had one of these cars when I was a young boy but this particular one was imported from Australia. It rallied there and competed at Brooklands in the UK and it came on the market about a year or so ago. We’ve done lots of work on it and it’s running like a Swiss watch. We’re really looking forward to the Start.”

Renfrewshire’s Provost Anne Hall, who will help wave the drivers off from the start ramp, added: “We are delighted to be able to host the world-famous and event here in the historic town centre of Paisley.

“Last year’s event was a really memorable night with a great atmosphere and the sight of the cars setting off from outside Paisley Abbey made for a magnificent spectacle.

“We have a programme of entertainment laid on from 4pm and we look forward to seeing another bumper crowd on the day.”[/vc_column_text][vc_column_text]Images to accompany the story: Monte Carlo Rally Organisers Expect 10 000 Crowd for Paisley Start.

Image: sct_montecarlo_free_jsh3.jpg. Caption: Mike Marsh (with flag) and Guthrie Anderson show off their Hillman Imps at the former Hillman Imp Factory at Linwood on the eve of the 2015 Monte Carlo Classic Rally in Paisley.

Image: sct_montecarlo_free_jsh4.jpg: Caption: Mike Marsh (with flag) and Guthrie Anderson show off their Hillman Imps at the former Hillman Imp Factory at Linwood on the eve of the 2015 Monte Carlo Classic Rally in Paisley.

Image: sct_montecarlo_free_jsh6.jpg: Caption: Mike Marsh (with flag) and Guthrie Anderson show off an iconic Hillman Imps at the former Hillman Imp Factory at Linwood on the eve of the 2015 Monte Carlo Classic Rally in Paisley.