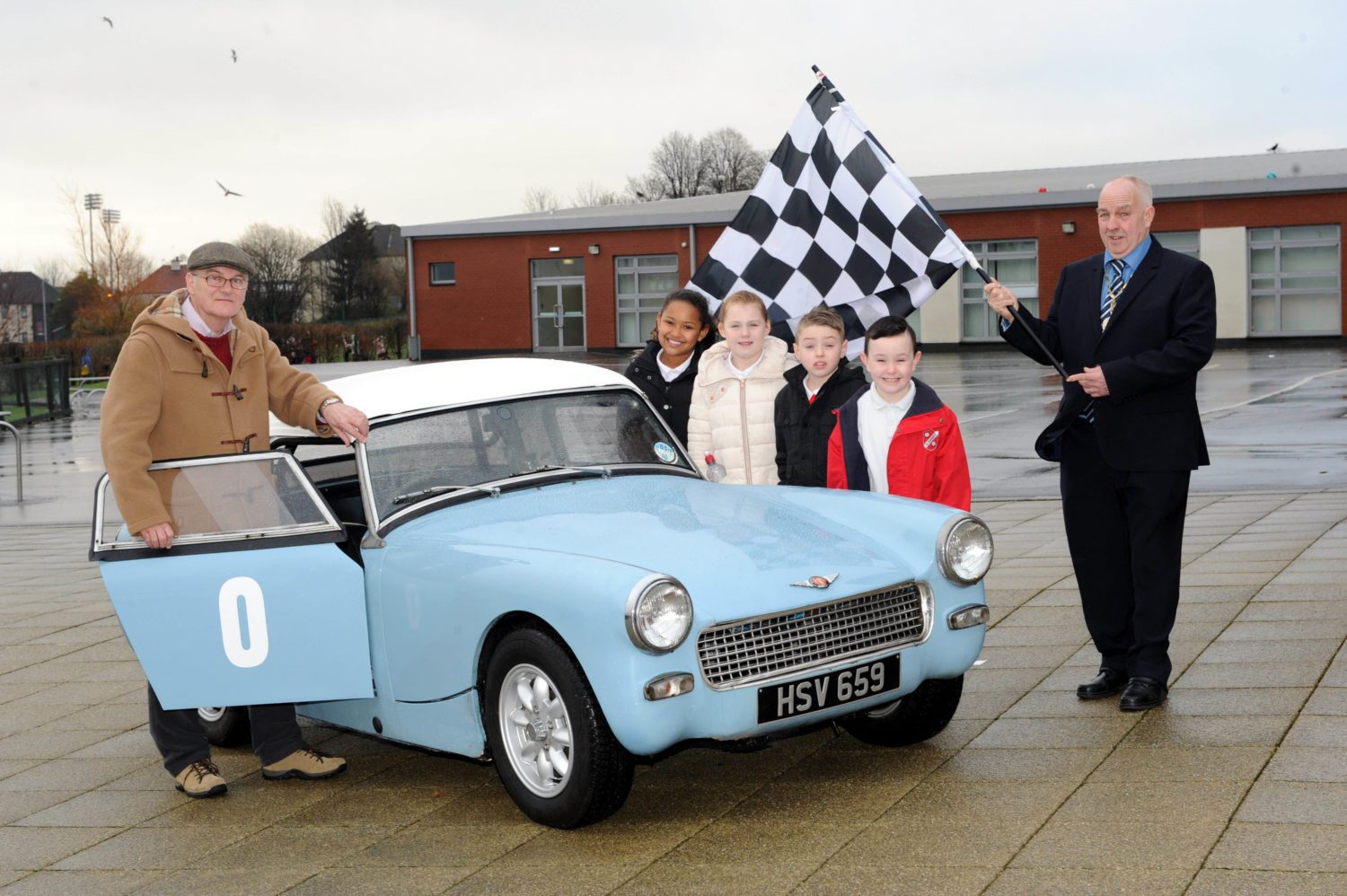 [vc_row][vc_column][vc_column_text]Excitement is building as one of world motorsport’s most glamorous events returns to Paisley this week – and a group of schoolkids got a special preview of what to expect.

Magnificent machines from through the decades will descend on the town centre on Wednesday for the only UK start leg of the Monte Carlo Classic Rally, with around 70 cars leaving from Abbey Close.

And a group of pupils from Glencoats Primary in Paisley got up close to one of the cars set to take part when a 1962 Austin Healy Sprite turned up in the playground.

The car belongs to Douglas Anderson, chair of the rally start committee, and the man who brought the event back to Scotland in 2010 after a near-40-year absence, netting millions for the country’s economy.

Glencoats is one of four local schools which took part in an art project to celebrate the arrival of the rally, alongside St Peter’s, Langcraigs and St Catherine’s, and some of the pupils will be there on the night.

Wednesday’s start is being hosted by Renfrewshire Council and a programme of entertainment has been laid on from 4pm, before the cars start to leave from 6.45pm.

Capital FM’s Des Clarke and Jennie Cook will be there to entertain the crowds with music and chat, while the Capital FM Street Stars will be out and about getting the crowd involved in some prize giveaways.

Paisley Town Hall will host kids’ comedy with Toybox aka Billy Kirkwood, while there will be street entertainers out and about around Abbey Close, where the cars will assemble.

Renfrewshire’s Deputy Provost John Caldwell, who was also at the school, said: “We had a fantastic night when the Monte Carlo Classic Rally made its debut in the town last year, and anticipation is building ahead of it coming back for 2015.

“Hosting the rally puts the town firmly on the European stage as we are one of only five host cities, alongside Barcelona, Copenhagen, Turin and Reims.

“Being able to attract an event of this calibre is testament to Paisley’s growing reputation as a venue for top-class events.

“And we are looking to build on that ahead of our upcoming bid for UK City of Culture status in 2021.”

Douglas Anderson, chair of the Rally Start Committee, said: “The Monte is an event with a timeless allure and it appeals to people of all ages – as we can see today from the reaction of the schoolkids to the car.

“It is great to see the next generation taking an interest in the event, and who knows, maybe we have a future Monte competitor here today?

“The Rally Start Committee and our partners in Renfrewshire Council have been working hard to ensure the 2015 event is bigger and better than ever and we are all looking forward to another fantastic day in Paisley next week.”

For more information on the event, visit www.renfrewshire.gov.uk/events[/vc_column_text][/vc_column][/vc_row]