Our thoughts and prayers go to everyone affected by the tragedy at Queen Street Station and George Square today. From Paisley with Love

Six people have been confirmed dead after a bin lorry careered into a group of pedestrians and cars in Glasgow’s George Square.

Eight other people — including the driver of the lorry — are being treated for injuries at three hospitals across the city, police have confirmed.

George Square was closed following the crash near to the entrance to Queen Street train station shortly after 2.30pm on Monday.

Eyewitnesses said that a Glasgow City Council bin lorry collided with several vehicles and hit a number of pedestrians between the Gallery of Modern Art and the station.

There were unconfirmed reports that small children were among those struck by the lorry. 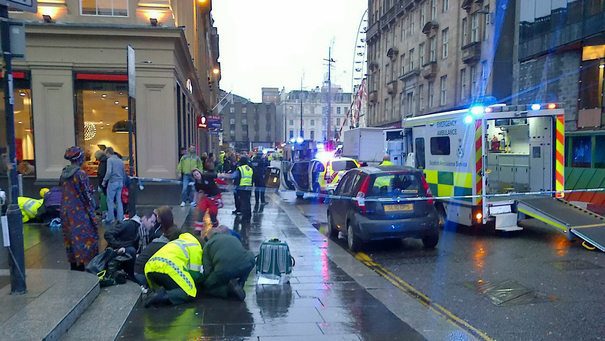 The lorry driver appeared to lose control near to Royal Exchange Square before careering north along Queen Street, bystanders said.

It finally came to a stop when it collided with the Millennium Hotel, at the side entrance to Queen Street train station on the corner of George Square and within sight of Glasgow City Chambers.

Text and above image from http://news.stv.tv/west-central/304454-serious-road-accident-in-glasgow-george-square/