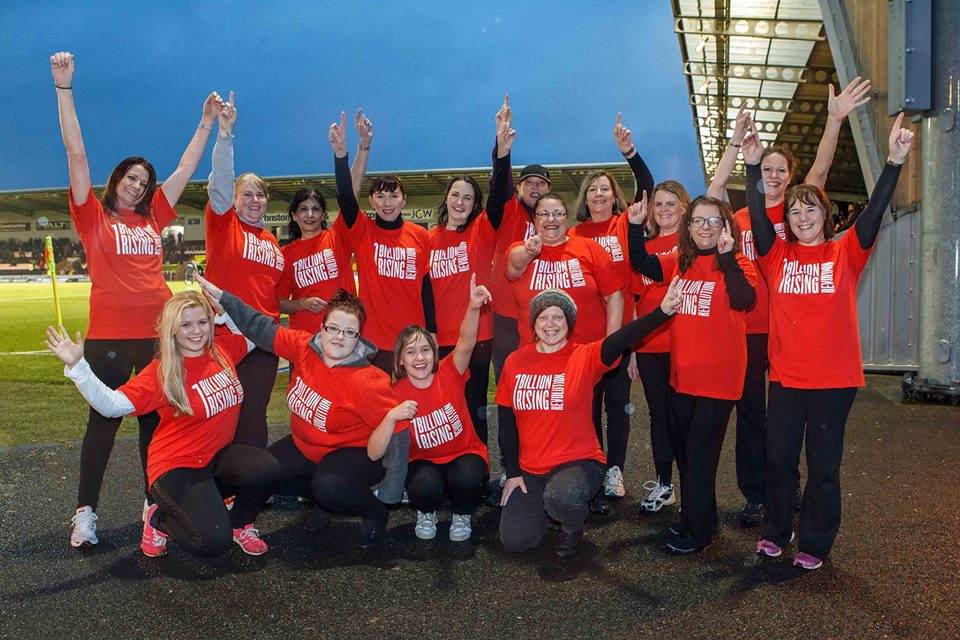 [vc_row][vc_column][vc_column_text]16 women took the message of violence against women to thousands of football fans last Saturday.

Despite the wind and the rain, the women performed a special dance on St Mirren park at half time.

The Break the Chain dance by One Billion Rising, was performed as part of Renfrewshire’s 16 Days of Action, a local version of the UN’s international campaign to end violence against women.

St Mirren players showed their support by wearing the One Billion Rising t-shirts during their warm-up.

Brian Caldwell, Chief Executive of St Mirren, said, “We are really proud to support Renfrewshire’s 16 Days of Action campaign. It’s important for us to send out a message that violence against women is completely unacceptable.

“Having the group perform the Break the Chain dance during half time was a great way to send that message. They had clearly been practicing and we were all very impressed.

“I’d like to say a big thanks to everyone who took part, their hard work really paid off and everyone at St Mirren appreciated the chance to show their support for this important issue.”

Councillor Iain McMillan said “The Break the Chain dance at half time was a welcome surprise for St Mirren fans.

“We hope that it will encourage people to think about violence against women and how we can begin to stop it.

“Throughout the entire 16 Days of Action it is been great to see so many people committed to raising awareness of these issues which affect so many women in our community.

“All of the women performing the dance were volunteers and gave up their own free time to practice and to come here today.

“It is thanks to volunteers like these that we can have these important conversations and show Renfrewshire’s commitment to ending violence against women.”

Festive safety campaign back on Renfrewshire streets
Scroll to top