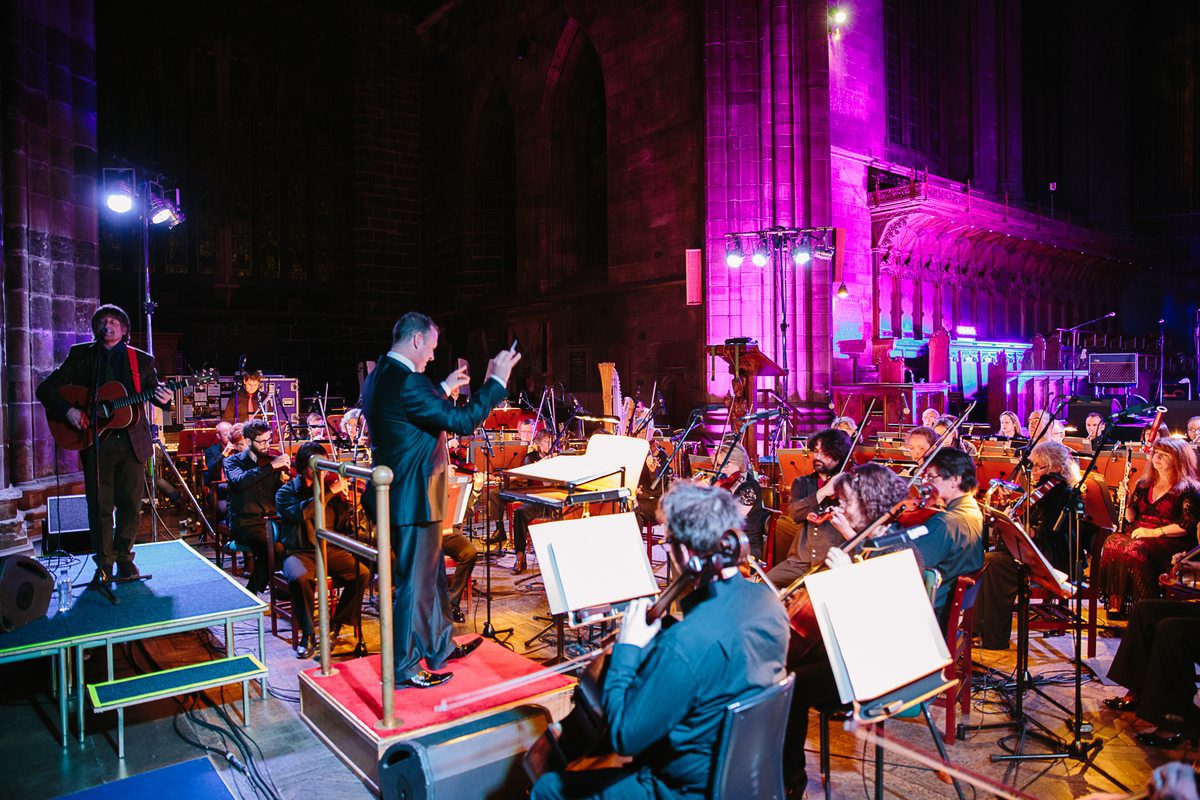 Paisley’s Spree festival closed at the weekend after a nine-day arts extravaganza …and organisers reckon the festival is going from strength to strength.

The Spree 2014 saw around 60 shows across five venues around the town, including a specially-built Spiegeltent, with an estimated total attendance of more than 5,000.

This year’s bill featured music, comedy, theatre, film and even a hypnotist, as well as a well-attended programme of children’s shows to coincide with the October week.

The undoubted highlight was a one-off collaboration between King Creosote, Roddy Hart and the Lonesome Fire, and the Royal Scottish National Orchestra in the stunning setting of Paisley Abbey on Friday night.

The show was the most eagerly anticipated on the bill – with all tickets having been snapped up within days of going on sale in August – and it didn’t disappoint, with the orchestra adding a thick layer of sonic grandeur to the music of both artists.

Host for the night, broadcaster Vic Galloway, thanked festival organisers Renfrewshire Council and asked the crowd to wish Paisley all the best with its possible bid for UK City of Culture status in 2021.

Roddy Hart described the gig as his ‘proudest ever moment as a songwriter’ and the reaction to both sets suggested the 400-strong crowd were delighted to be there.

There was also plenty big-name comedy on the bill, with Russell Kane, Craig Hill and Daniel Sloss all featuring, alongside two editions of the regular Buddy Good Laugh stand-up nights.

And the children’s programme proved popular, with the kids’ comedy attracting big crowds to the Spiegeltent, as did the free Let’s Do Robotics with Lego workshops, timed to run alongside the first week of the Brick Wonders Lego exhibition at Paisley Museum.

The festival was organised and promoted by Renfrewshire Council as part of a wider push to offer a varied cultural programme and use events to bring people into the area.

Council Leader Mark Macmillan said: “This was the third annual Spree festival and the event is now starting to firmly establish the town on Scotland’s festival map.

“We want to show people they don’t have to go to the city for a good night out – that we are able to attract quality acts to Paisley.

“Some of the feedback we have had has been fantastic – in particular the reaction to the Abbey show confirms we have a venue and a formula that is pretty special, and we look forward to building on that.

“The council has big plans to use Paisley’s superb heritage assets and cultural scene as the engine behind a wider process of regeneration over the next decade.

“We are grateful to everybody who came out and supported the event and we look forward to growing the festival in the years ahead.”[/vc_column_text][/vc_column][/vc_row]