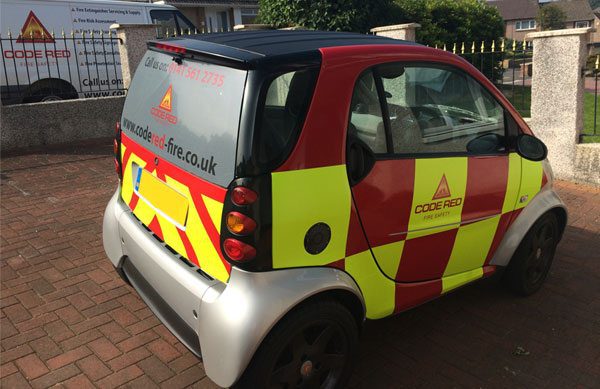 You might have spotted a small, bright, chequered car buzzing around Paisley and wider Renfrewshire in recent weeks. Well, you won’t be alone.

Local Fire Safety company, Code Red Fire, has decided to try and do its bit to help the local environment. While they admit it is just a small contribution in the grander scheme of things, they feel it’s still better to be helping than not.

The Code Red vans have been a common site around Paisley and Renfrewshire in recent years, as they travel from client to client, servicing Fire Extinguishers, carrying out Fire Risk Assessments and delivering training to companies who need it.

However, as the business has grown, and the delivery of services has improved, the need to carry all their equipment all of the time has gradually reduced. As such, the company has decided to add a more environmentally friendly mode of transport to the company fleet.

“The vans have been great, and certainly helped in the growth of the company.” Said James McMahon, founder of Code Red Fire. “However, with better organisation of appointments and more focused services, we’re just not needing to carry all of our equipment around in the same way we used to. That means we’re often driving the van because it’s the only option, rather than because we need it.”

“So we’ve added a smaller, more environmentally friendly option. It allows us to travel from client to client, when equipment isn’t needed, with less pollution output. It also takes up less space, is less noisy and is more fuel efficient. All of which hopefully contribute in some way to improving the local environment.”

The car has even been given a name by some of those who’ve already spotted it – the “Code Red Mobile”. So, if you see it around town, why not take a picture and let them know what you think. Post your picture on Twitter with the hashtag #CodeRedMobile