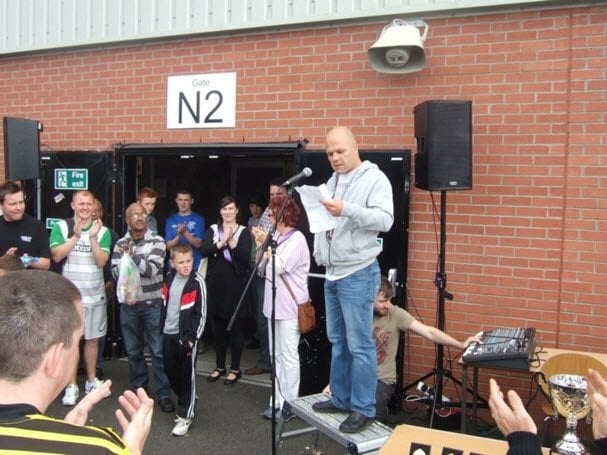 A special movie premier event is to be held in Paisley next week as part of Suicide Prevention Week 2014.

The documentary film, which was made around the ‘No Substitute For Life’ football tournament in June, will be shown at 7pm on Monday 8 September in the Tannahill Centre, Ferguslie.

The annual memorial football tournament was held on 29 June in order to raise awareness of suicide within the community. As well as the seven-a-side tournament the event was a community day which included entertainment and activities for children and adults and an opportunity for bereaved families and friends to leave a message to those they had lost on the Ferguslie Memorial Tree.

‘No Substitute for Life’ is organised by community volunteers in partnership with Choose Life, Recovery Across Mental Health (RAMH) and Engage Renfrewshire.

This year the event was filmed along with interviews of organisers and members of the Survivors of Bereavement by Suicide (SOBS) group talking about the issue of suicide and its impact on individuals and communities.

The film launch aims to showcase and celebrate the efforts of the local community who have worked together to create a suicide safer community.

Kate Sharkey, from Johnstone, who is a members of SOBS said: “People need to know where to go when in crisis, this event lets the community connect with some of the services in the area which should hopefully encourage people to seek help when in crisis.”

Paul Cardona, from Ferguslie Park, said: “It’s important for the community to get together and remember those they have lost suicide.”

As well as showing the film, the event also provides an opportunity for members of the public to find out about local and national services which can provide support in times of distress.

Both RAMH First Crisis and Breathing Space will present information on how best to use each service. The Samaritan’s and SOBS will also have information stands and will be available to chat and answer any questions. The event will be informal with tea, coffee and biscuits.

There will be a crèche available on the night, to book a space in the crèche please contact the Choose Life team on 0141 849 2200, or email chooselife.sw@renfrewshire.gov.uk.

You can also get more information at www.suicide-prevention.org.uk[/vc_column_text][/vc_column][/vc_row]