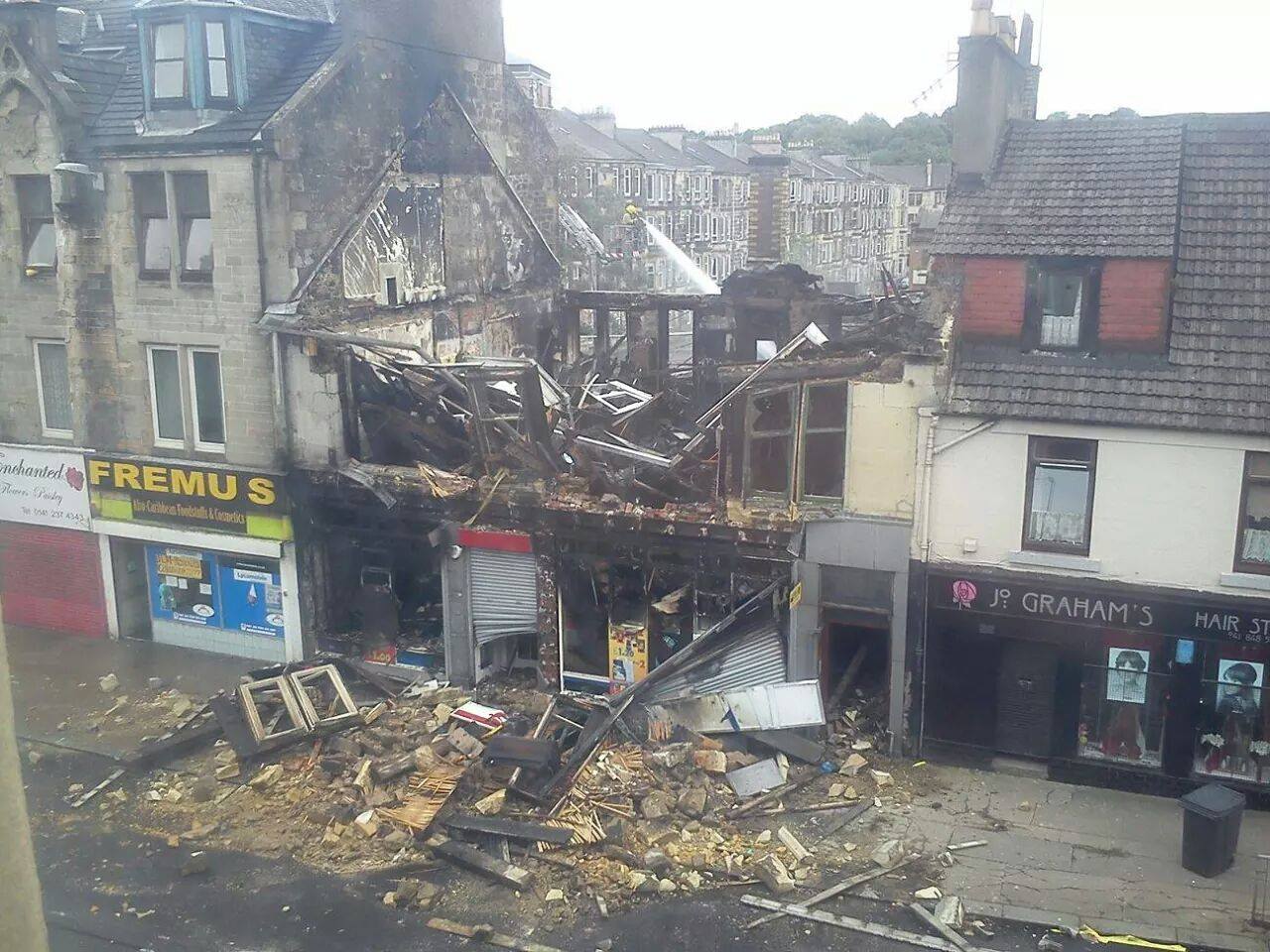 [vc_row][vc_column width=”1/1″][vc_column_text]Paisley Buddies Rally Round for Social Good. The people of Paisley have once again rallied round to help others in need this weekend and what an eventful couple of days it has been..

We have had the disappearance of a young 8 year old in Gallowhill, and when notified, the community rallied round on Facebook and Twitter, people immediately went out in their cars or on foot to the area looking for her, police were heavily involved and people far and wide including comedian Jason Manford all helped spread the news.

It took less than an hour to find the young girl and she was re-united with mum who was shaking with nerves.
The mum then took to Facebook to thank everyone who had helped in the search.

We also had emergency calls for the swans on the River Cart as four of their new cygnets were found swimming in a dumped container of oil and one of the four young swans had gone missing and feared dead. 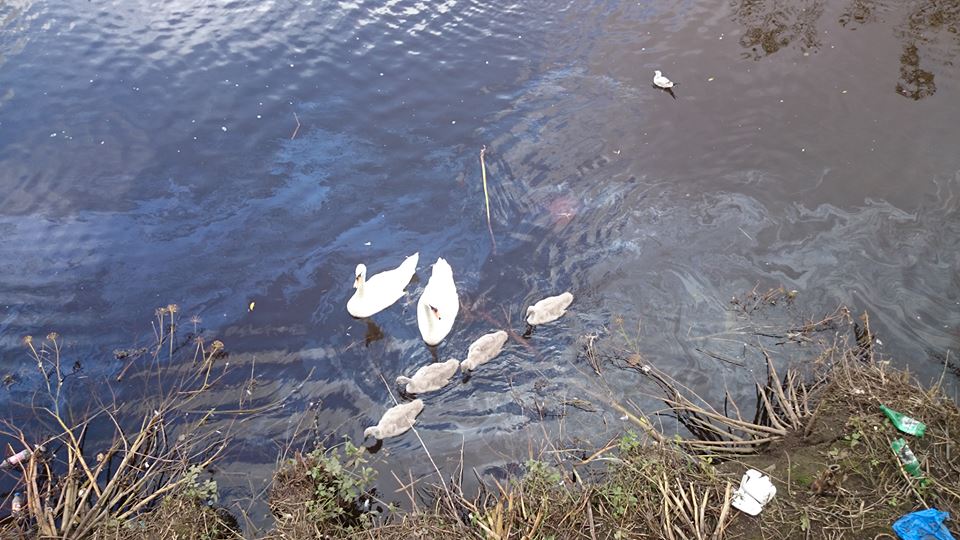 Luckily again the community rallied and volunteers at www.paisley.org.uk had organised the SPCA, Hessilhead Wildlife Rescue Centre and the police to go down to make sure all was well. We also had people go down and watch out for them till help arrived and luckily Hessilhead Wildlife Rescue Centre staff came and gave them a health check and will keep an eye on them for the next couple of days until any sign of danger has passed.

Then there were reports of a fire at the West End of Town this morning and as the day went on the building collapsed and was destroyed, unbeknown to us there were 17 people living in the flats above the shop that was on fire.

A family of five were left on Well Street (3 children – 2 months 6 year old boy and 2 year old girl) literally in the clothes they left the house in and the kids had no shoes. A member of the public picked them up and took them to their temporary accommodation which was organised by Renfrewshire Council at Gleniffer Hotel in Paisley. Two families are now in temporary accommodation there.

There was a massive cry for help for the families who literally lost everything in the fire and had nothing left.

A collection centre was organised at the West End community centre and the Lagoon Leisure Centre which took the bulk of donations that were asked for, from nappies and wipes for the baby, shoes and clothing for the kids and clothing and necessities for the adults. 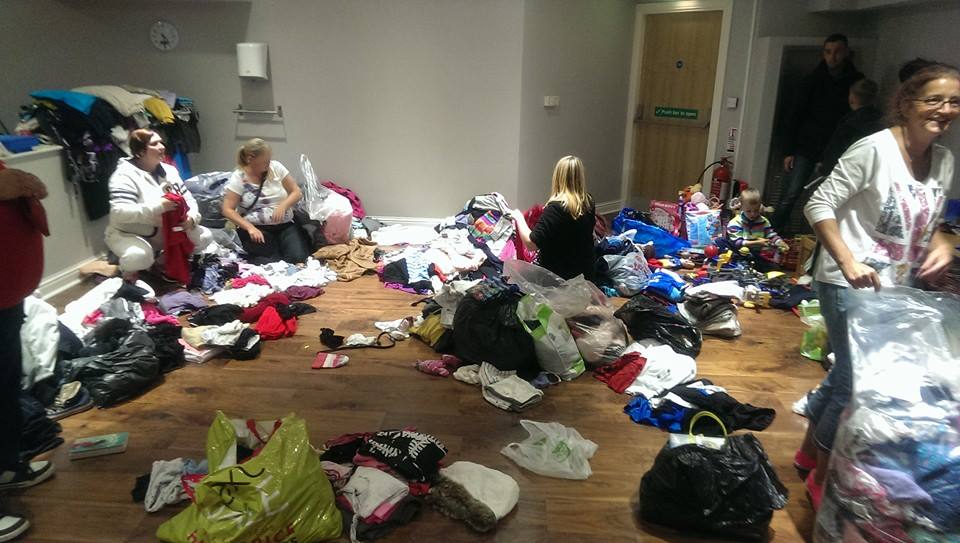 People from all around including Clydebank, Renfrew, Erskine and surrounding areas of Paisley have came together for the families and the collection point at the Lagoon Leisure Centre was swamped with donations.

Jenna Givens who set up the facility said. “After smelling the smoke and seeing the posts on Facebook I couldn’t sit still. People were talking but action needed to be taken.

Paisley and by extension Scotland as a nation have proved on many an occasion they are more than willing to pull together in a crisis. I tried my best to secure a venue and in less than 1 hour the Lagoon offered me a facility.

From there I attempted to use Facebook for “the greater good” and it went viral. All of a sudden 30+ volunteers over the course of the day offered their helping hands to collect the generous donations from Renfrewshire.

Police liaised with myself and allowed enough information to tell us how many people we were appealing for. I met two of the families amongst the devastation, humbled with gratitude and sincerely thankful for all we have done.

The support continues tomorrow for them and we are sticking by them until they are on their feet again. A page has been set up for fundraising and we can only hope people will dig as deep into their pockets as they did into their wardrobes.

Sincere thanks from me for the kind messages people have sent. I am merely the middleman (woman) who set up base for people to extend their generosity further.”

The families now have emergency packs and have also been given lots of kind donations including a free slap-up meal from The Ark (next to Sma’ Shot Cottages) and cash donations to help them get by.

People have literally been in tears at the generosity of the public and just how Paisley has come together over a weekend to help complete strangers.

I can only speak for myself (Brian McGuire of paisley.org.uk), it has been a crazy weekend and one of the busiest social weekends for some time, I have had thousands of tweets and hundreds of Facebook posts over the last couple of days, the Paisley Buddies really are the salt of the earth and amazing when times of need come calling. I am always proud to come from Paisley but this weekend I am especially so… well done everyone.

My word of the weekend is Social Good and it definitely has been a weekend for Paisley Buddies to Rally Round for Social Good.