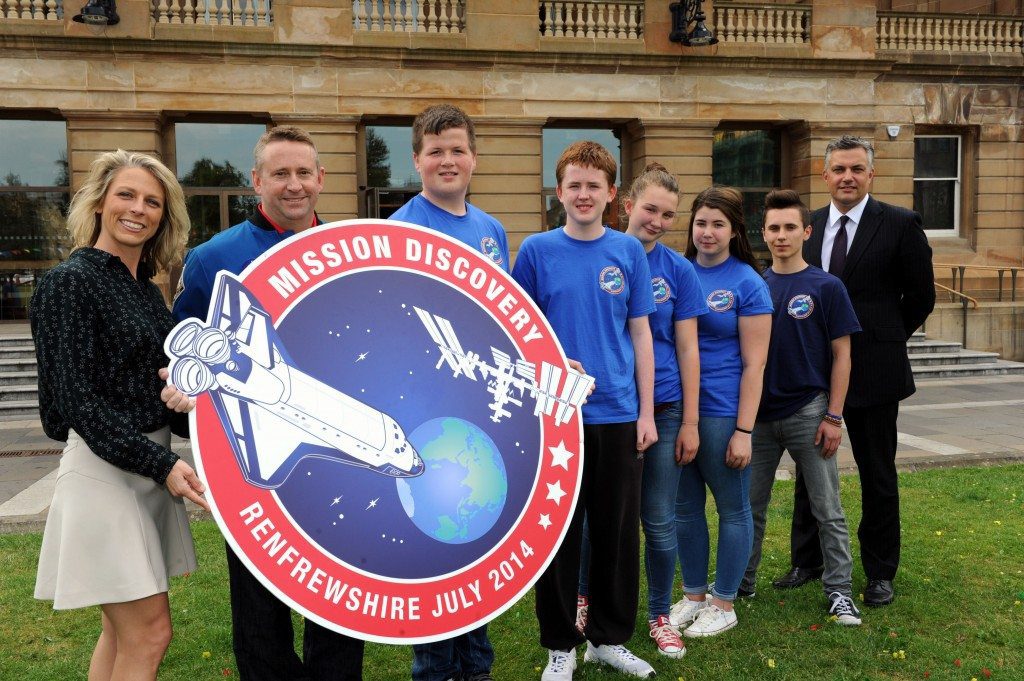 Six Renfrewshire students are reaching for the stars after hearing their science experiment will be blasted into space and carried out on the International Space Station.

The once-in-a-lifetime prize was their reward for taking part in Mission Discovery Renfrewshire – a week-long space school run by former NASA astronauts. Paisley Town Hall was the venue for the first-ever visit to Scotland of the event, run by a team including former Space Shuttle Commander Ken Ham and his wife Michelle, a former NASA astronaut trainer.

Around 200 local S4 to 6 pupils were split into teams, each mentored by a student from University of the West of Scotland or West College Scotland, and asked to devise a science experiment knowing the winning concept would go into outer space to be carried out for real.

And amid emotional scenes, a delighted winning team of Apollo 12 – who want to test bacteria to help find a cure for the eye condition conjunctivitis – were named as the winners, in a moment captured by a TV crew from STV News.

There was further joy when Michelle Ham surprised the runners-up by announcing that there may be room on the space station for their experiment too. Ben, 15, of Park Mains High in Erskine, said: “The whole thing is just amazing. When we were told we were the winners I almost collapsed – it was really overwhelming.

“Michelle and Ken are such inspiring people – they make you think that anything is possible.”

Ken Ham added: “The whole reason we do these things is for that moment of realisation when the when the winning team is told their intellectual property is going into space. It’s always just a really amazing moment.”

Mission Discovery Renfrewshire was run by the International Space Station Educational Trust, and brought to Paisley by Renfrewshire Council and event sponsors University of the West of Scotland and West College Scotland, with additional support from Renfrewshire Chamber of Commerce and 29 Studios.

Renfrewshire Council Leader Mark Macmillan added: “I would like to thank all connected with Mission Discovery and ISSET for being such superb guests.

“They made the whole week an unforgettable one for the young people who took part, and were utterly inspirational figures to be in the company of.

“We want to provide the very best opportunities for our young people and last week they did us proud – the organisers were full of praise for their commitment and the quality and ingenuity of their work.

“The next decade or so opens up massive opportunities in terms of commercial space flight – and with the science and technology industries we already have here in Renfrewshire, this area could be a part of that.

“Ken and Michelle have certainly shown the sky is no limit in terms of what you can achieve if you put your mind to it – and who knows whether the first-ever Scottish astronaut may well have been in that room last week.”