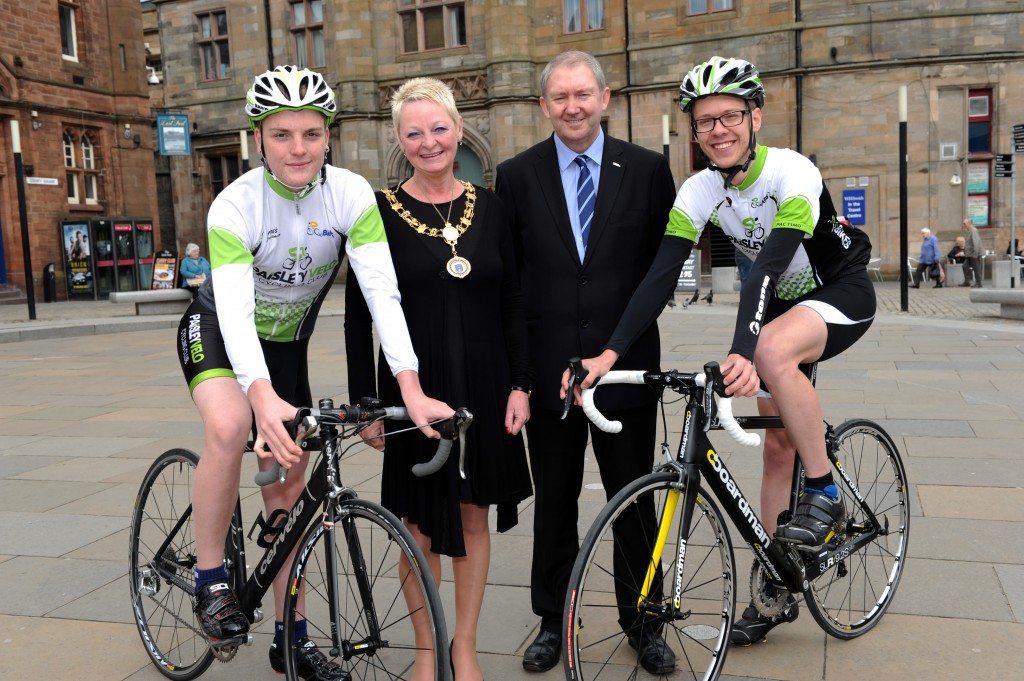 Renfrewshire is gearing up for a sporting first on Saturday when the world’s only pop-up track cycle race lands in Paisley town centre.

StreetVelodrome is a high-intensity all-action cycling event currently touring the UK and about to make its first-ever visit to Scotland. Amateur riders pre-register to race against the clock, with the fastest being coached by pro riders before competing in the final for a place on the podium.

Pro cyclists on the day will include Ross Edgar, whose glittering track career includes an Olympic silver medal for Team GB in 2008 and a gold in the team sprint for Scotland alongside Chris Hoy in 2006.

Amateur try-outs will be from 8am to 11.30am, before the final – to be televised later this year on Channel 4 and Sky Sports – takes place at 2pm.

To take part, riders have to pre-register with StreetVelodrome, but can still do so through their website at www.streetvelodrome.com

The County Square event is being hosted by Renfrewshire Council, who will lay on other activities including giant games and an outdoor spin-bike class run by Renfrewshire Leisure.

Also on the bill will be Keelan Phillips – an international champion in freestyle BMX riding – who will perform stunts for the crowds in between races.

Councillor James Harte, Convener of Renfrewshire Council’s Sport, Leisure and Culture Policy Board, said: “We are thrilled to be hosting the first-ever visit to Scotland of this exciting new event.

“Interest in sport is set to reach a peak this week with the Glasgow 2014 Commonwealth Games kicking off just a few miles up the road.

“It’s great to think that on the opening weekend, people will be able to see an athlete who has won Commonwealth gold for Scotland right here in the heart of Paisley.

“I would encourage any local cyclists to take the chance to be coached by one of the sport’s biggest names, and maybe even race in front of the TV cameras.

“And for anybody who doesn’t fancy high-speed racing round the track there will be loads going on around County Square to make it worth being a spectator.”

For full details about the event and to register online, please visit the StreetVelodrome website or www.renfrewshire.gov.uk/events

There will also be a one-hour open session from 4pm where the general public can receive coaching and track time for free.[/vc_column_text][/vc_column][/vc_row]