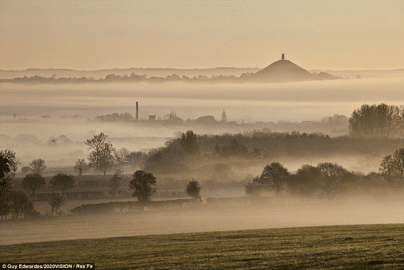 Unusually, Britain does not always enjoy a reputation for spectacular scenery. This could be because it is located, in a geographical sense, within a temperate zone. As a result it rarely experiences extreme weather and is not home to the sort of exotic wildlife that can be found on the African savannah or the jungles of South America. Similarly, its mountain ranges and wildernesses are not in the same league, at least in terms of size and scale, with other countries. All of this means that there is a real risk that great British sceneries can be overlooked by people seeking to experience striking landscapes and capture them on film.

However, this assumption can lead to many missed opportunities because, as travellers who do their research know, the British landscape offers a unique and easily accessible form of beauty. Glastonbury is synonymous today with the musical festival it hosts, and with which it shares a name, but this part of Somerset in the South West of England is steeped in history and is closely associated with Arthurian legend. Ancient historians even believe it could be where King Arthur’s body was finally laid to rest. In the early mornings in the UK’s spring and summer, open space landscapes like this are often shrouded in an eerie mist which absolutely transform the view and even seem to provide a glimpse back to another time. A bit of patience, an early start, and a good position on high ground are essential and the particularly lucky photographer may even get to see a herd of deer through the mists, adding to the historic atmosphere. Helping to show that Britain can comfortably compete with even the most dramatic locations, this is the sort of photo that even British people would be surprised to learn was taken in their home country. It is not Nepal, but actually one of several routes up Ben Nevis in the Scottish Highlands. At 4,409ft above sea level, Ben Nevis is the highest peak in the UK and offers a range of challenges for most levels of fitness. Avid mountaineers and adrenalin junkies can challenge themselves with a climb up some of the more dramatic and precarious routes, while families and dog walkers can take a more sedate walk up the footpaths which, at the right time of year, are accessible to the majority of people. Whichever route one takes, the pay-off is to experience some of the most spectacular views in the country. Britain does not only have beautiful natural landscapes, shaped over the centuries by a gentle weather system and a history of agriculture. It also has more than its share of urban beauty, with cityscapes like the one above that shows off the striking Millennium Bridge in the city of Gateshead in the north of England. Britain is home to some of the world’s most forward-thinking architects, who have flexed their creative muscles over the years to put Britain’s cities, and not just London, on the map. As a country with a rich and varied history, this means that ancient buildings sit alongside some of the most dramatic new designs. So, as well as the iconic ‘Gherkin’ and ‘Shard’ buildings in the capital, and Gateshead Millennium Bridge for example, photographers can also capture their own interpretation of St Paul’s Cathedral, the thousand-year-old Warwick Castle in Warwickshire or Canterbury Cathedral in Kent, to name just a few.

Digital photography for everyone

It was not so long ago that photos of this quality were only within the capability of professional photographers with a range of expensive equipment, or at least the very lucky amateurs. Today, a digital camera is a luxury well within the budget of most people, especially given the range of prices available.

By investing in a good quality camera and understanding all of its features and capabilities so they can be quickly and simply applied in the moment, anyone with an eye for a photo has the potential to capture breath-taking images like those above that can be revisited and enjoyed for years to come.

The pictures above are amazing in themselves, but still only provide a glimpse of what Britain has to offer to the keen traveller and photographer. The recent affordability and accessibility of digital technology has enabled a whole new generation of both professional and amateur photographers, and nothing can equal being there in person when capturing the view, and the moment, for oneself.[/vc_column_text][/vc_column][/vc_row]

Cycling thrillseekers turn out for Street Velodrome
Scroll to top