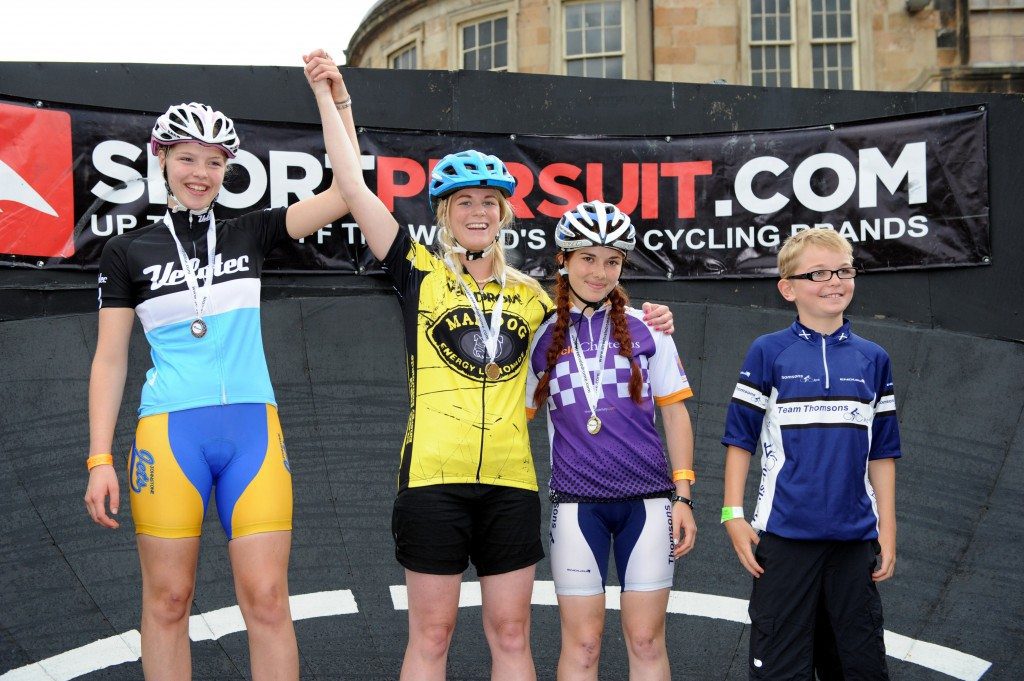 Paisley played host to a day of adrenaline-pumping cycling action when the world’s only pop-up track cycle race event landed in the town centre on Saturday.

County Square was the venue for the first-ever Scottish visit of StreetVelodrome – a mobile cycle track currently touring the UK. Amateur riders had all morning to test their times on the circuit, with the fastest entrants qualifying to be coached by and race alongside professional cyclists in the StreetVelodrome Series final.

The star name among the pros was Scotland’s Ross Edgar, who won a gold medal for the UK at the 2008 Olympics, plus Commonwealth gold for Scotland two years earlier.

The final standings were a victory for local clubs, as both Jack and Isla compete for the Paisley-based Team Thomson’s Cycles, while Sarah races for the Johnstone Jets.

The whole event took place in front of the TV cameras, with a dedicated programme to be broadcast on Channel 4 and Sky Sports later this year.

Hundreds of residents came out to take in the spectacle – with extra entertainment on the day including giant games and an outdoor spin bike class run by Renfrewshire Leisure.

There was also a dedicated timeslot for members of the public to enjoy some track time.

The event was hosted by Renfrewshire Council as part of the area’s town centre events programme.

Councillor Jim Harte, Convener of the council’s Sport, Leisure and Culture Policy Board, was there on the day to take in some of the action.

He said: “We are delighted to be the first and only area in Scotland to host this innovative and exciting event.

“The local area has a really strong cycling scene, with several elite clubs competing at national level – and it was great to see some of their riders represented here on the day among the winners.

“The council is keen to help promote sport and healthy lifestyles, the profile of which is high right now with the Commonwealth Games taking place just up the road. Hopefully today will have encouraged some of the crowd to get on their bikes.

“Holding events like this is a key part of what the council is trying to do, in terms of selling our town centres as destinations.”

The next major town centre sporting event in Renfrewshire will be the Paisley 10k, on Sunday 31 August.