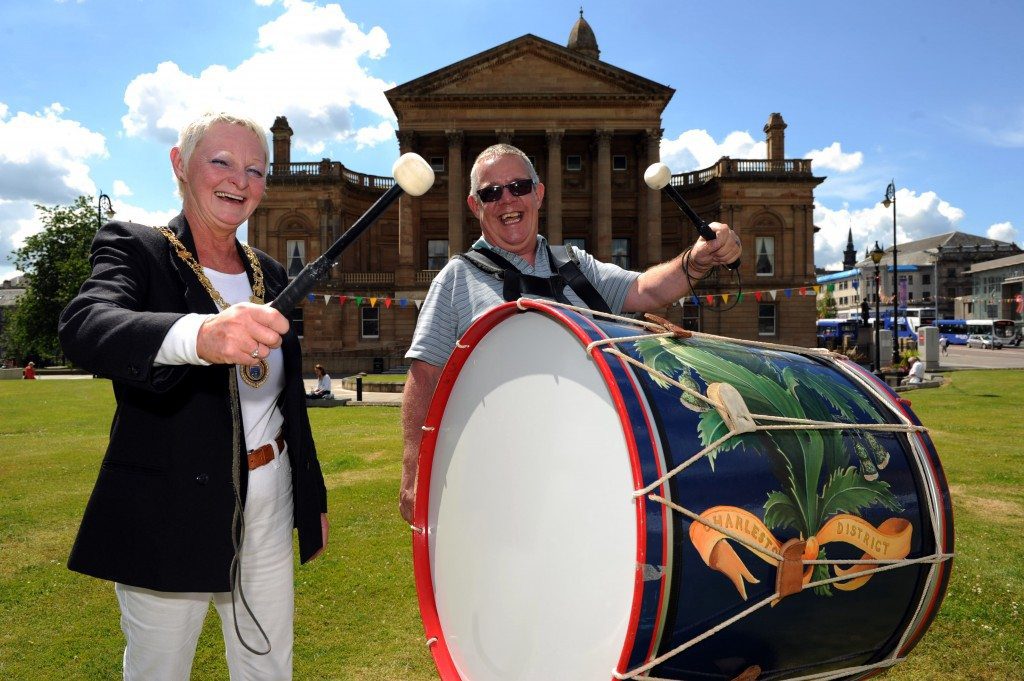 Countdown is on to Sma Shot Day

The popular annual event – one of the oldest workers’ festivals in the world – will take place on Saturday 5 July in the usual place of Abbey Close. The fun begins at noon when the parade, headed by the beat of the Charleston Drum, sets off from Brodie Park.

Attractions at Abbey Close include funfair rides and stalls including the Slug in a Bottle market, featuring a mix of traditional and vintage clothing and accessories.

There will be performances throughout the day on the outdoor stage from PACE Youth Theatre Group as well as various local bands from LNP Promotions.

The day will culminate with the spectacular Burning of the Cork – which marks the victory of the 19th-century weavers over the mill owners – at 5pm.

Elsewhere, older folks can step away from the crowds at a tea dance in Paisley Town Hall from 1 to 3pm.

A full schedule for the day can be viewed at www.renfrewshire.gov.uk/events

To help promote the event, Renfrewshire’s Provost Anne Hall met up with Freeman of Renfrewshire Tony Lawler, who will take up his usual place beating the drum at the head of the parade. Provost Hall said: “Sma Shot Day is always a popular family favourite and we hope to see a big crowd come out and enjoy the day.

“Last year’s event took place in blazing sunshine so fingers crossed the Paisley weather is kind and we get more of the same this year.

“Sma Shot Day is important because it helps keep alive a link to the area’s proud past at the heart of the world’s textile industry.

“The council has recently announced big plans to use Paisley’s heritage and culture to drive regeneration and tourism over the next decade, and events like Sma Shot Day will be part of that.”

Sma Shot Day celebrates the victory of Paisley’s weavers over the town’s mill owners in the 19th century.

The owners refused to pay their staff for the Sma’ (small) Shot thread, which was unseen but held together the famous Paisley-patterned cashmere shawls. Any residents planning a trip into the town centre on Saturday are reminded that parking is free in all council-metered bays every weekend.[/vc_column_text][/vc_column][/vc_row]

Glasgow News? Daily Updates part of our network
Commonwealth hero gets on his bike for Paisley cycle event