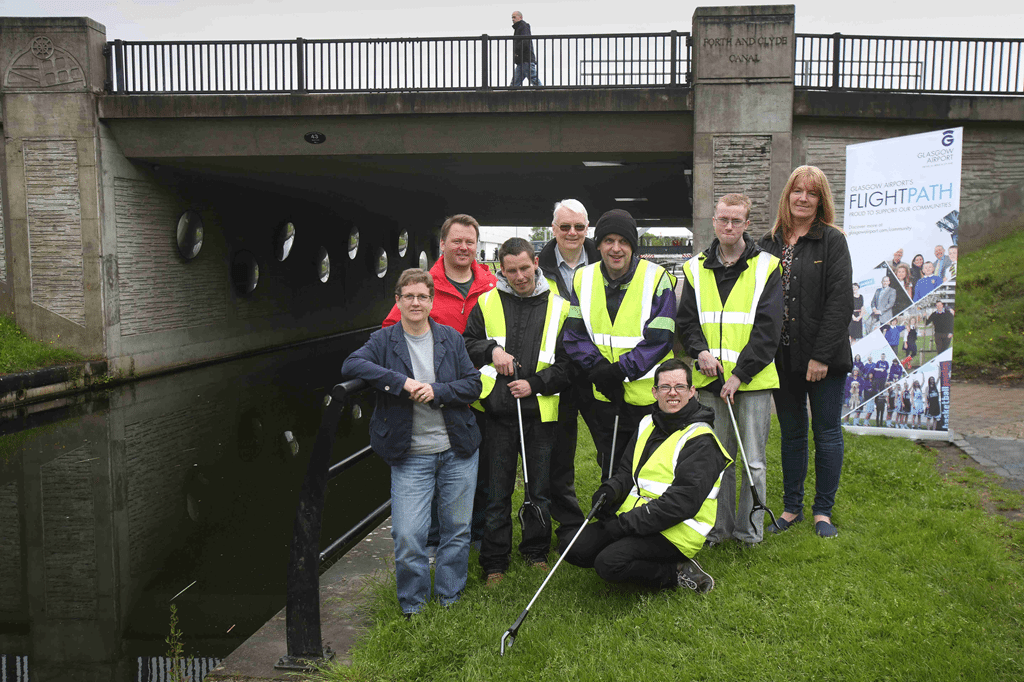 Both banks of the Forth & Clyde Canal are set to be transformed in an effort to encourage Clydebank residents to use it as a walking route.

Glasgow Airport is supporting a new project which aims to make the canal more inviting for locals with a £25,000 award from its FlightPath Fund.

West Dunbartonshire Community Volunteer Services (WDCVS) will involve the communities of Whitecrook, Linnvale and Dalmuir in the plan to design and create distance markers and benches along a two mile stretch of the canal.

The FlightPath Fund support will also enable the WDCVS to train up to 48 volunteers to become qualified walk leaders and first aiders. The final element of the project will involve the design, production and distribution of a leaflet promoting the health benefits of walking the canal route every day.

While around 100 people will be directly involved, it is estimated that the project could benefit as many as 5,000 residents.

WDCVS will work with partners including Scottish Canals, Paths For All and the Glasgow-based social enterprise GalGael, which will run a series of workshops for local people to design and build the benches and markers.

It is hoped that by promoting the canal as a walking route local people will make use of it and take advantage of the physical, mental and emotional benefits. Glasgow Airport had invited local charities and community groups to apply for a one-off ‘Challenge Fund’ lump sum of £50,000, but decided to make two separate awards rather than one. Erskine, Bishopton and Inchinnan Community Sports Hub in Renfrewshire has also received £25,000.

Councillor Kath Ryall, who sits on the Flightpath Fund committee, said: “The Forth & Clyde Canal is an important part of the community as it runs right through Clydebank and I think it is fantastic that the WDCVS has placed such a focus on improving it to the benefit of the residents that live nearby.

“When we considered the applications we received for the Challenge Fund, we wanted to support projects that make a real difference. By improving the appearance of the canal, enabling the community to take ownership of it and encouraging people to get physically active, I believe the project will have a significant positive effect on Clydebank.”

Selina Ross, chief executive of WDCVS, said: “We are delighted to have been chosen as the recipients of the Challenge Fund and for the opportunity to be able to take this exciting project forward with the people of Clydebank. Volunteering is a crucial aspect of the project and we would encourage anyone who would like to be involved to get in touch with us.”

Linton McBurnie, volunteering co-ordinator at Scottish Canals, said: “The Forth & Clyde Canal is a fantastic resource for the people of Clydebank and our hard-working volunteers are vital to safeguarding and improving the rich heritage and environment of the waterway for everyone to enjoy.

“We’re delighted to be involved in this exciting project that will make a real difference to the canal and the communities that line its banks. Working with our partners, we look forward to encouraging even more people to take to the towpaths, get active, and enjoy a section of the Forth & Clyde Canal that the local community has very much taken ownership of.”[/vc_column_text][vc_separator icon=”star”][vc_column_text]http://www.glasgowairport.com/[/vc_column_text][vc_separator icon=”star”][/vc_column][/vc_row]