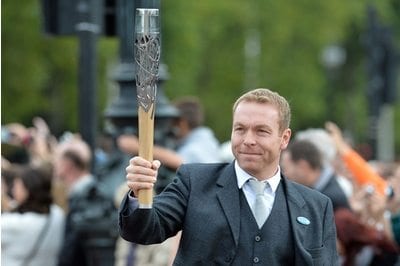 The symbol of the Glasgow 2014 Commonwealth Games is on its way to Renfrewshire – and everybody can join in the fun!

The Queen’s Baton Relay will arrive in the area on Thursday 17 July on day 34 of an epic 40-day trek across Scotland. The route
The relay will start just before 8am in Howwood, and ending at 6.45pm in Paisley town centre. Our route map allows you to see the street-level detail – maybe it passes your front door?

The baton will be carried by around 150 specially-selected batonbearers – many of them grassroots sporting and community champions from Renfrewshire.

It will be carried within a specially-controlled convoy of police and other vehicles. Batonbearers will only carry the baton for part of the route (shown as a red line on the map) – for the rest it will travel by car (shown as blue).

The itinerary is as follows….

Be aware that the baton is held to strict timings and will only be in each area for a set amount of time. Photographs will only be allowed where time allows.

Event listing
Along the way there will be various stops where the public will have their chance to get up close to the baton. Highlights are as follows….

0830 to 1200 – Free entertainment in Houstoun Square, Johnstone including circus-style street entertainers and a performance by the Pokey Hat Theatre Company. Baton stops at 0929 for 15 minutes.

1200 to 1800 – County Square in Paisley will host street theatre by Pokey Hat, while members of the Commonwealth Youth Circus will be running workshops and going walkabout in the town centre during the day.

1357-1412 – Chance for the public to touch the baton as it passes round the running track at Park Mains High, Erskine

Is your group running an event as part of the Relay? Let us know by emailing towncentres@renfrewshire.gov.uk and we’ll add it to this page.

Many of the events on the day are taking place in partnership with the Games for Scotland programme, managed by EventScotland, which forms a key part of the Scottish Government’s commitment to deliver a lasting legacy as a result of the Commonwealth Games coming to Scotland.

Traffic and parking
Some temporary road closures and parking restrictions will be required on the day itself, so residents should be prepared for a degree of disruption while the baton is in their area.

All road closures and parking restrictions will be listed here….

Be a fan on the day
Fancy seeing the baton and want to show your support for Team Scotland?

Christian Blessing for the seven sentenced to death in 1697 under the witchcraft...
Scroll to top