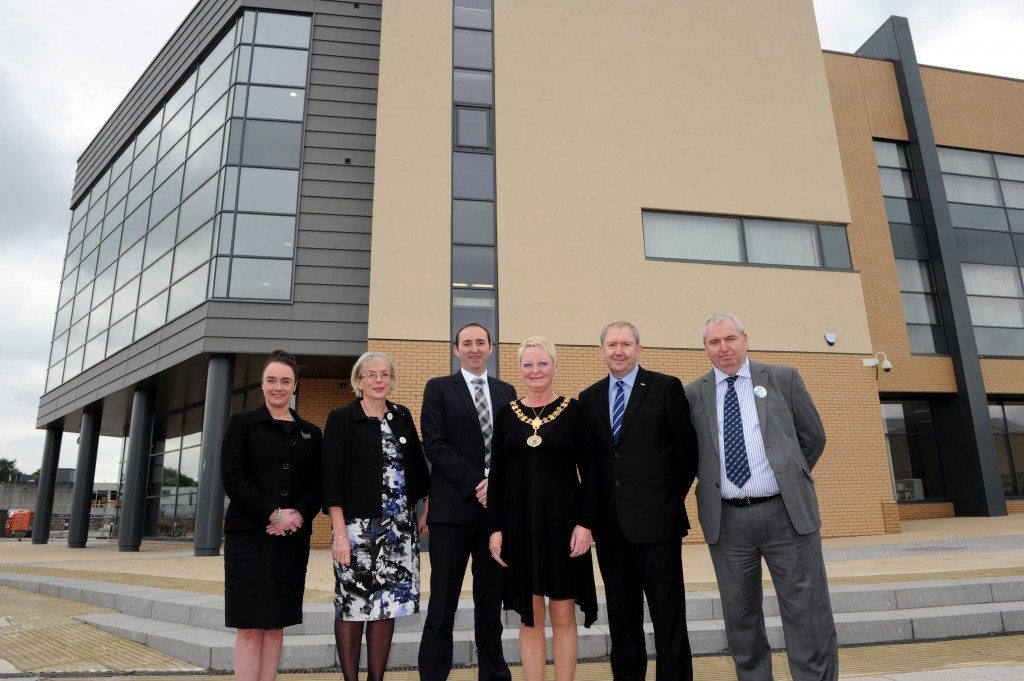 New Linwood Tweedie Hall and Library gets a thumbs-up

The new Linwood Tweedie hall and library has opened its doors to the public – and been given the thumbs-up by elected members and staff.

The striking glass-fronted building has been dubbed ‘a modern centrepiece for life in the town’, having opened to customers in late-May.

The facility was handed over to the council a few weeks ago, having being built by Tesco as part of their new supermarket development in the town centre, and will replace the old Tweedie Halls and library.

The ground floor contains a reception desk and a well-equipped library, while the upper floors feature meeting rooms and conference space, including a 350-seat main hall with mobile stage.

Renfrewshire’s Provost Anne Hall and Councillor Jim Harte, Convener of the council’s Sport, Leisure and Culture Policy Board, were given a guided tour of the new building by staff from the arts and museums and libraries services.

Councillor Harte said: “Residents and visitors alike will be impressed by the new building once they get inside and see around it – staff are already reporting positive feedback from customers. “One stand-out feature is the glass-fronted design, which means the upper floors offer some fantastic views out over the hills and beyond.

“Not only does the new hall boast superb facilities, it will form a modern centrepiece for life in the town for generations to come.”

Provost Hall added: “I enjoyed being shown around the new building, which will be a great facility for the people of Linwood, as is the On-X leisure centre just along the road.

“A lot of people in the local community worked long and hard to help make this project happen over the years.

“Sadly, not all of them are still with us to see it, but I hope the completed facility will sit as a fitting tribute to their efforts.”

The two councilors were met by representatives of Tesco and their building contractors, Barr Construction.

Colin Caldow, who will be the manager of Tesco Linwood said: “It’s great that as part of this development Tesco along with Barr Construction has been able to provide residents with such a great public resource.

“The Tweedie Hall is a fantastic facility and a brilliant focus for the local community.

We look forward to opening in a few months and adding to the positive buzz and atmosphere that is surrounding Linwood town centre.”

For more information about booking rooms in the new Linwood hall, call 0300 300 1210 or visit www.renfrewshire.gov.uk[/vc_column_text][/vc_column][/vc_row]

DON’T MISS THIS RARE OPPORTUNITY TO EXPERIENCE ONE OF GERMANY’S...
Scroll to top