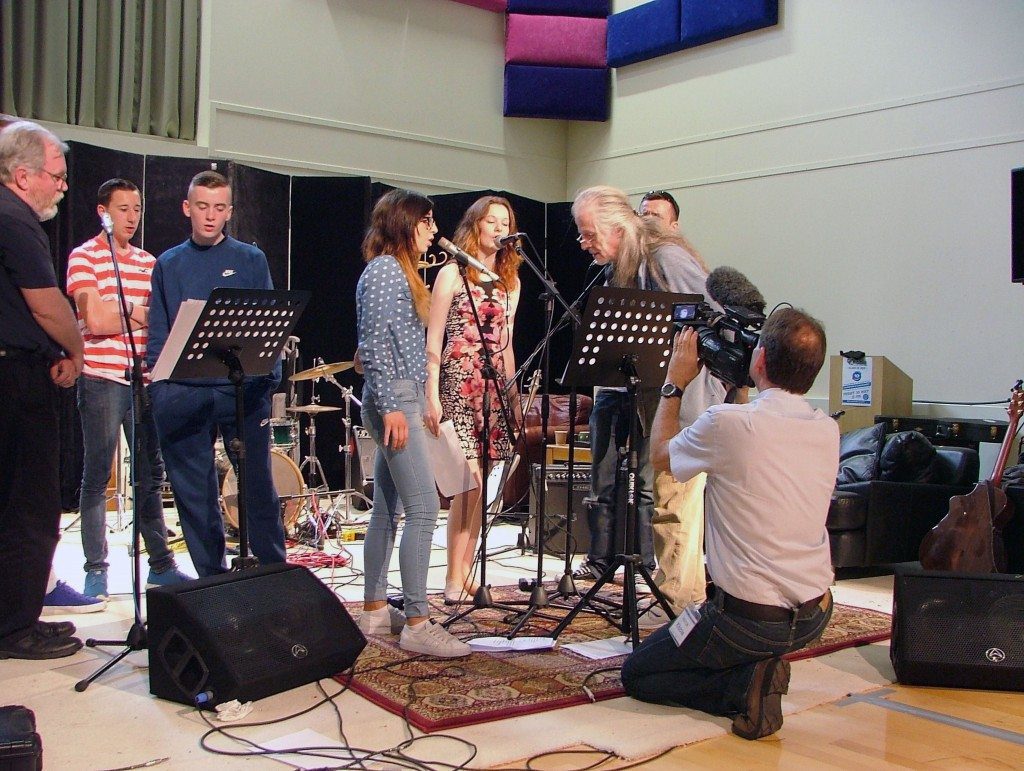 With pix of Kibble pupils at recording session and of Tom Newman, left and Paul Brett.

AN iconic Beatles song has been recorded being performed like never before.

Legendary British music producer Tom Newman had pupils at Paisley’s Kibble Education and Care Centre sing a verse and chorus of With A Little Help from My Friends in a broad Scots accent. The youngsters were the first pupils to take part in a project that will see Scots schoolchildren record tracks from the famous Beatles album, Sgt Pepper’s Lonely Hearts Club Band.

Tom, along with fellow rock musician, Paul Brett – who played lead guitar with The Strawbs – visited Kibble to set up a day’s recording session with pupils playing guitars, singing and playing percussion instruments.

Now Kibble pupils have been recorded doing a cover version of the Sgt Pepper album’s title track as well as With A Little Help From My Friends.

And when the teenagers thought they had finished the song, Tom got them to record a verse and chorus in a Scots accent using lines like ‘I get by wi’ a little help fae ma pals’.

Tom – who was involved in setting up Virgin Records with Richard Branson in 1972 – explained: “We didn’t want to make just another cover version of a Beatles song. I wanted the pupils to create a Scottish version and something that will stick in people’s minds.

“And you never know, they may be able to knock Simon Cowell’s acts off the Number One spot in the charts.”
Paul said: ”We decided to start off the project at Kibble because the pupils and staff were very enthusiastic about the project and embraced the idea.”

Chris said: “The recording session was a great way to build confidence and social skills, as well as showing pupils how to work as a team and towards a common goal.

Glasgow News? Daily Updates part of our network
Search is on for ‘best bar none’ in Renfrewshire