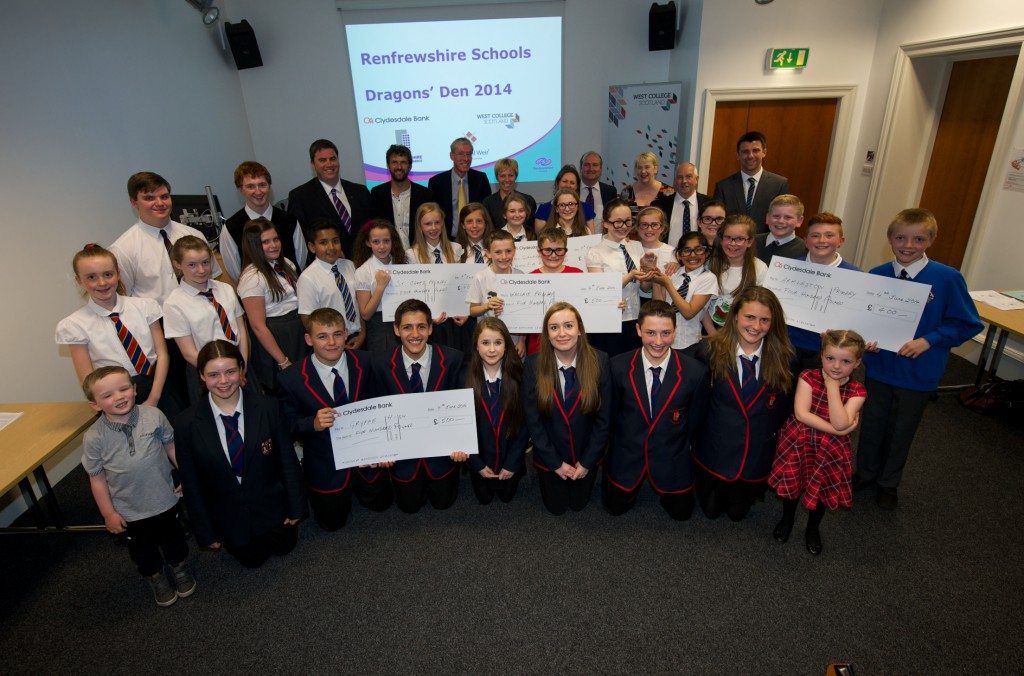 Six teams of entrepreneurial Renfrewshire school pupils faced a panel of ‘dragons’ in a bid to win funding for their social enterprise ideas.

A community cinema, a nail bar, a school newspaper, a library, an internet course for older people and sugar and gluten-free lollipops were the ideas selected for this year’s school’s Dragon’s Den finale.

The final event took place at West College Scotland, Paisley Campus, where the six finalist teams were invited to present their ideas to the ‘dragons’ before they selected this year’s overall winner, Gryffe High School.

The Gryffe High team were also named as the secondary school winners and awarded £600 towards their community cinema idea. Winners in the primary school category were Wallace Primary for their idea of creating a library for the primary and nursery children.

The Pre-five category winners were Our Lady of Peace Nursery for their ‘Little Lollipop League’ plan to use sugar/gluten-free lollipops to raise awareness of road safety.

The trophies were presented by Renfrewshire’s Provost Anne Hall.

Provost Hall said: “I’d like to congratulate the winners Gryffe High, as well as each of the finalists who all did a fantastic job coming up with and presenting really impressive, viable business ideas.

“The schools’ Dragon’s Den competition is an excellent way of getting young people thinking about running a business as well as giving back to their community in some way.

“I’d also like to thank the sponsors for their support and contributions in making this event possible each year.
“It was a fantastic night. All of the teams did an excellent job, especially the children from Our Lady of Peace Nursery who were very good despite it being a late night for them.” This year’s finalists were:

Our Lady Of Peace Nursery – The Little Lollipop League
The plan is to sell sugar/gluten-free lollipops to raise awareness of road safety issues in the community.

With roadworks being a feature of the local landscape in recent times, the young people have identified the risks they face on a daily basis and wish to make others aware of these dangers.
They were awarded £400 towards their enterprise.

Arkleston Primary – Resident Nail Bar
The business idea is to run a Nail Bar/Salon, in Arkleston Primary, for all pupils, staff and parents of the school, and residents and families of Renfrew Care Home.
The young people wish to build on the strong intergenerational links that already exist between the school and Renfrew Care Home by providing a high quality, professional service.
The ‘dragons’ awarded the project £400.

The enterprise will be led by the school’s ‘Big News Press Team’ and aims to involve the local community in the life of the school whilst improving levels of attainment in literacy.
The ‘dragons’ awarded the project £400.

Wallace Primary School – Wallace World of Books
Pupils at Wallace Primary are eager to establish a library which services the primary school and nursery.
The aim is to provide a space where young people can borrow books and improve their reading ability.
As winners of the primary category, the team were awarded £500.

Gleniffer High School – Silver Fox Surfers
A group of current S4 pupils will be offering a four week (one per term) Web Wise course for senior citizens in the local area.

The young people aim to run a successful business which enhances the lives of the older generation living in the community as well as providing them with a new skill set.
The project was awarded £500.

Gryffe High School – Gryffe Movie Theatre
Gryffe High’s business idea is to run a community cinema from the theatre within the school.
Creation of a community hub in the area is important to the young people of Gryffe High and they see huge potential in this enterprise.
The team were awarded £600 towards their project.