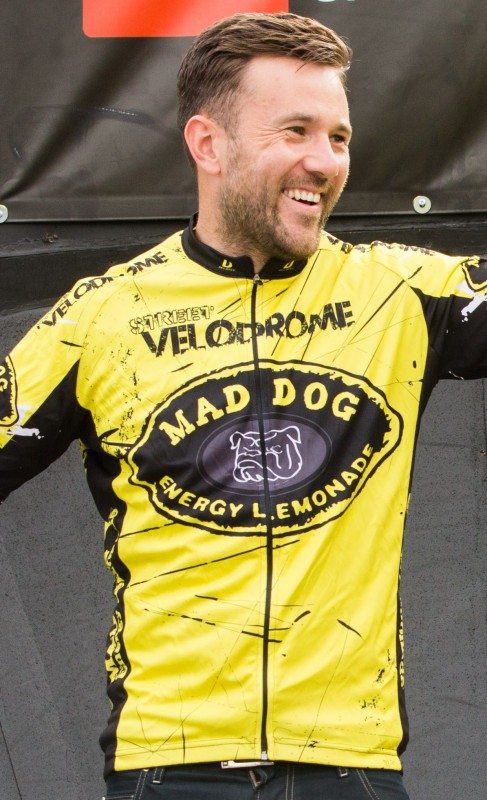 Commonwealth hero gets on his bike for Paisley cycle event

An Olympic and Commonwealth medal-winning cyclist will be the star attraction when the world’s only pop-up track cycle event visits Paisley town centre next month.

Amateur riders will be able to pick up tips from Ross Edgar – one of British cycling’s biggest names – when the StreetVelodrome series lands in County Square on Saturday 26 July. Ross was part of Team GB for the 2004 and 2008 Olympics, winning a silver medal in the Keirin event in Beijing.

He also competed for Scotland in two Commonwealth Games, winning gold in the team sprint in 2006 in Melbourne, alongside Sir Chris Hoy.

He will be one of several professional riders taking to the track when StreetVelodrome arrives in Paisley for only Scottish date in the all-action televised event’s 2014 UK tour.

Amateur riders sign up to receive coaching from the pros and then race against the clock – with the fastest riders competing for a place on the podium at the end of the day.

Also on the bill will be Keelan Phillips – an international champion in freestyle BMX riding – who will perform stunts for the crowds in between races, and offer some lessons in basic stunts to local kids.

The event will be televised around the UK and abroad, with a dedicated programme to be broadcast on Channel 4, Sky Sports and Eurosport, putting Paisley in the spotlight.

To take part, riders have to pre-register with StreetVelodrome, but can do so through their website at www.streetvelodrome.com Ross said: “I’m really looking forward to racing in Round 5 of the SportPursuit StreetVelodrome Series in front of a home crowd in Paisley.

“Representing Scotland in past Commonwealth games was a great honour, but racing alongside fellow pro riders plus local amateurs in the head-to-head racing of StreetVelodrome is a real adrenaline rush and a fun experience.

“I hope we manage to find a local amateur who can get one over the pro riders and qualify to join us for the series finale in London.”

The event is being hosted by Renfrewshire Council as part of the area’s town centre events programme, and councillors have welcomed the latest development.

Councillor Roy Glen, Convener of the council’s Economy and Jobs Policy Board, said: “Interest in sport in Scotland is set to reach a peak this summer when the Glasgow 2014 Commonwealth Games kicks off.

“So it’s great to think that people can see – or even race alongside – a Commonwealth gold medallist right here in Paisley on the opening weekend of the Games.

“The council’s town centre events programme is getting bigger and better every year – and this year’s will have a strong sporting theme, with the Queen’s Baton Relay passing through the area on Thursday 17 July, just nine days before StreetVelodrome.

“We have this year unveiled big plans to use the area’s culture and heritage to drive regeneration and tourism, and hosting more top-class events like this will be a big part of that.”

For full details about the event and to register online, please visit the StreetVelodrome website. Entry costs £22 for senior riders (aged 24-plus), or £12 for juniors (aged 14 to 24).

There will also be a 90-minute open session at the end of the day where the general public can receive coaching and track time for free.

Countdown is on to Sma Shot Day
Scroll to top